Over the past several months, there has been alarm in Russian about the import of depleted uranium, a possibly dangerous substance that some regard as radioactive waste. Bellona’s Alexander Nikitin, who heads our St Petersburg office, has since helmed a working group aimed at keeping this process transparent for a nervous public. 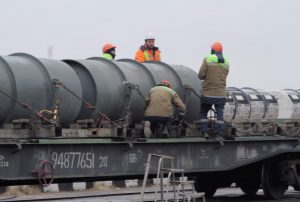 Over the past several months, there has been alarm in Russia about the import of depleted uranium, a possibly dangerous substance that some regard as radioactive waste. Bellona’s Alexander Nikitin, who heads our St Petersburg office, has since helmed a working group aimed at keeping this process transparent for a nervous public.

The Russian government had long ago discontinued the imports, so their resumption, under terms that were less than public, took many, Bellona included, by surprise.

At issue was the revelation late last year that Techsnabexport, a subsidiary of Rosatom, Russia’s state nuclear corporation, had contracted to import depleted uranium from Urenco, a German-based nuclear fuel conglomerate. Rosatom had ceased the imports in 2009 after widespread environmental outcry over the conditions of its storage in Siberia, which was often in the open air.

Depleted uranium, also called uranium hexafluoride, is a colorless radioactive powder that is produced as a byproduct of enriching uranium for use as fuel in nuclear power plants. Many in the nuclear industry, Rosatom included, say that the compound is a useful raw material that can be applied in fuel enrichment. Numerous environmental groups, however, contend that transporting the substance is hazardous, and say that it should be stored as waste rather than reprocessed for further use.

In late October Greenpeace and Ecodefense proved that these once-abandoned imports had resumed and published German government documents showing that Urenco had contracted with Techsnabexport to accept some 12,000 tons of the compound from Germany over the next two years.

In Bellona’s opinion, that contract appeared to violate the public trust. We published our concerns about the imports in Russian and English in the hopes of getting a detailed explanation from Rosatom about why the imports had resumed and how the corporation planned to ensure that they were being conducted in a safe manner.

When our concerns became public, Rosatom convened a special session of its public council – a consultative body comprised of environmental organizations – and formed a working group, of which Bellona’s Alexander Nikitin was appointed the head.

This group has now had its second major meeting in Moscow, which drew together environmentalists, scientists from Russia’s nuclear fuel services and officials with Rosatom, Russia’s state nuclear corporation. And while several points of disagreement between environmentalists and nuclear officials still persist, the late February meeting offered at least some evidence that the industry is trying to meet its critics halfway.

Mikhail Zarubin, a vice president with TVEL, Russia’s nuclear fuel producing giant, opened the meeting with a paper on the safe handling of the depleted uranium imports, which had been revised to accommodate comments from Russia’s environmental community. 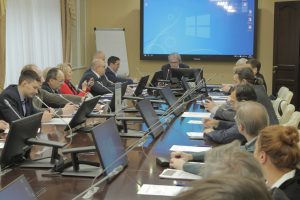 According to the paper, TVEL will increase the number of facilities used to process depleted uranium from four to five with the aim of diminishing Russia’s already huge supply of the substance.

By most estimates, Russia already holds some 1 million tons of depleted uranium – a fact many environmentalists have highlighted in their opposition to yet more imports. But Zarubin’s report suggested that by adding new processing facilities, TVEL would be able to eliminate the accumulated reserves of depleted uranium by 2057.

Still, Maksim Shingarkin, a liberal democratic party member of Russia’s parliament, raised concerns about how the depleted uranium was transported from Germany, suggesting that it was just as dangerous as shipping nuclear fuel. Specifically, he wanted to know if officials had calculated the environmental consequences of an airplane crash on a load of depleted uranium – an accident scenario often considered when transporting nuclear fuel. Nikitin asked nuclear officials to supply Greenpeace and Shingarkin with relevant studies. 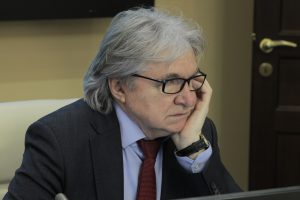 Nuclear officials are also considering different avenues through which to transport the depleted uranium into Russia – ones that many environmentalists would consider safer than brining it to the port of St Petersburg, and the city’s population of 5 million.

One of these points of entry, according to Oleg Kozin of Techsnabexport, is Ust Luga ­– a small town port located 160 kilometers to St Peterburg’s west. The plan would have to be approved by local politicians, and Nikitin urged Kozin to open that dialogue.

At the meeting’s conclusion, Nikitin noted that when the scandal of the renewed depleted uranium imports broke, “we had nothing.”

“Now, there is a program devoted to safe handling finalized by community members, and there is clarity on many matters,” he said, adding that while the imports continue, it will be the job of the working group “to ensure that the process is legal and safe.”