Dispatch from Zheleznogorsk: How Russia injects radioactive waste into the ground

In early September, experts from Rosatom’s Public Council for civil society visited the Severny Landfill – a site created for the deep burial of liquid radioactive waste generated by the Zheleznogorsk Mining and Chemical Combine, a former nuclear weapons production facility.

Published on November 4, 2019 by Alexander Nikitin, translated by Charles Digges 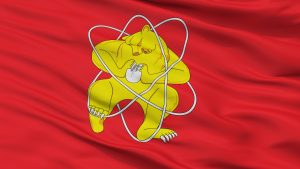 The city flag of the closed nuclear city of Zheleznogorsk. Credit: Getty Images

In early September, experts from Rosatom’s Public Council for civil society visited the Severny Landfill – a site created for the deep burial of liquid radioactive waste generated by the Zheleznogorsk Mining and Chemical Combine, a former nuclear weapons production facility.

According to Russian legislation entitled “On Radioactive Waste Management,” it is permitted to bury low- and medium-level radioactive waste in deep geological horizons, or reservoir formations, in only three places: in the Zheleznogorsk area, within the Severny Landfill; and in the closed nuclear cities of Seversk and Dmitrovgrad, which both have deep burial sites for liquid radioactive waste that were constructed before the legislation was written.

The Severny Landfill as experts see it

Prior to 2013, the landfill belonged to the Zheleznogorsk Mining and Chemical Combine. After the above legislation was adopted that year, the Combine handed the landfill over to Russia’s National Operation for Radioactive Waste Management, called NO RAO, which today has a license to operate the landfill until 2023. After the license expires NO RAO will either have to renew it or stop operation of the landfill and begin procedures for closing it. What decision will be taken is hard to predict, since it depends in the first place on how much liquid radioactive waste the Mining and Chemical Combine generates, and, secondly, on what position NO RAO, which is trying to follow IAEA recommendations, will eventually take on the matter.

It should also be noted that Russian standards require that all generated liquid radioactive waste be converted into solid form and then disposed of in landfills. Thus the future of the Severny Landfill remains uncertain, though one thing is clear: If it is closed, the monitoring of the liquid radioactive waste injected into it will have to continue indefinitely. Today, landfill staff say they are confident with implementing their tasks and ensuring safety.

Liquid radioactive waste comes from the Mining and Chemical Combine via special highways to the area of the injection wells and is then pumped into the underground horizons. The landfill is not allowed to take waste from anywhere else in Russia.

At the injection site, two geological horizons in the subsoil claims are used, one at a depth of 355 to 500 meters, the other at a depth of 180 to 280 meters. The volume of the first horizon is 14 million cubic meters and the second is 18 million cubic meters. The underground horizons are lenses with geological deposits in the form of sand, which inhibits water exchange beyond the boundaries of those lenses. Studies show that water isn’t distributed from the wells more than 100 meters. The speed of water in the directions of discharge is not more than about 5 to 15 meters per year. Radioactive substances settle on rock strata, as a result of which the water purifies itself. The pressure in the horizons is removed via discharge wells so that the pressure is always minimal. In total, about 150 wells are in use at the site, which are divided according to their purpose into injection, discharge and observation wells. Observation wells are used to monitor the subsoil claims and area located about 8 to 10 kilometers from the lenses in the direction of discharge. The nearby Yenesei River is protected by a massive rock formation in which the geology has shifted and created a natural barrier. In 2017, a number of studies confirmed the barrier’s integrity.

Before injection into the lenses, the liquid radioactive waste is checked to ensure that it is acceptable. Its radioactivity as well as its chemical and radionuclide composition is determined. State agencies responsible of environmental and industrial oversight maintain constant monitoring of the landfill and its injection wells.

There are strong opinions suggesting that it is pumping radioactive waste into geological horizons is the wrong thing to do, primarily because the IAEA doesn’t recognize it as a method of disposing of liquid radioactive waste. There are also concerns that that, because the waste is pumped underground it will migrate and penetrate aquifers. Environmentalists say that the practice presents a risk in the case of seismic activity and poses a delayed problem for future generations to deal with.

Still, a recent technical tour arranged for experts, the public and journalists showed the grounds of the landfill and made it possible to see how it works and to ask questions of the specialists working there. The impression we gained from the staff and of the landfill itself was very favorable. Perhaps this was facilitated by the good weather and the idea that the working day had reached its ends, and that dinner was just around the corner.

Alexander Nikitin heads Bellona’s offices in St Petersburg and is a member of Rosatom’s Public Council for civil society organizations.