Published on September 10, 2019 by Charles Digges 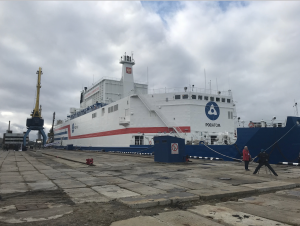 The vessel will now plug in at the port of Pevek, in Chukotka across the Bering Strait from Alaska, where its electricity will replace what’s provided by the Bilibino nuclear power plant, the world’s only commercial reactors operating in a permafrost environment.

The 140-meter floating plant, which was more than a decade in the making, is equipped with two KLT-40 reactors that provide a combined 70 megawatts of power. The operational staff of about 70 can also make use of the plant’s gym, swimming pool and bar.

Rosatom, Russia’s nuclear corporation, which developed the plant, has estimated that the Akademik Lomonosov can power a city of 100,000 residents. Pevek’s population, however, is a mere 4,700, so the bulk of the plant’s electricity will power local mining operations and offshore oil drilling rigs.

The plant can operate for 12 years before it needs to be refueled.

Environmentalists say the project is a gamble. Greenpeace has dubbed the Akademik Lomonosov as a “nuclear Titanic.” Bellona has opposed the construction of plant since the beginning, publishing a detailed catalogue of its concerns in a report it released in 2011.

What’s particularly worrying is how the plant would cope with a major inundation from a tsunami or other hard-to-predict nautical event.

Rosatom, however, insists the plant is “virtually unsinkable” and can withstand blows from icebergs and wave up to seven meters high.

Since the Akademik Lomonosov’s rocky – and often secretive – beginnings in the early 2006, Russia has attempted to sell the plant as a cure-all for the energy woes of the world’s more remote regions.

While a rush of orders has failed to materialize, Rosatom says it hopes to design customized floating nuclear plants for international customers, using the Akademik Lomonosov as its sales pitch.

In March of 2018, the company reportedly had initial talks about producing a floating nuclear plant for Sudan.

Both the cost of the plant and the infrastructure needed to connect it at its Chukotka mooring are thought to have cost about $480 million – though Rosatom has declined to provide an official price tag.