Officials at the Nerpa Shipyard near Murmansk said they have begun removing hundreds of spent nuclear assemblies, many of them damaged from what was once the country’s most radioactive nuclear fuel service ship, the Lepse.

Officials at the Nerpa Shipyard near Murmansk said they have begun removing hundreds of spent nuclear assemblies, many of them damaged from what was once the country’s most radioactive nuclear fuel service ship, the Lepse.

The fuel removal process is one of the most technically demanding projects facing Russia as it endeavors to clean up its nuclear legacy. When it’s finally complete next year, the Lepse project will represent decades of engineering feats and the coordination of millions of dollars in international assistance during often trying political circumstances.

The new phase in the dismantlement of the Lepse also marks another environmental milestone Northwest Russia’s nuclear cleanup efforts. For the past 27 year, Bellona has worked with its Russian and European partners to advocate for breaking down the Lepse safely.

The Lepse’s story begins in 1934, when it was launched on Ukrainian rivers as a dry goods ship. After World War II, it sat unused for several years until it was retrofitted and pressed into service as a nuclear fuel service vessel in 1961. For nearly the next three decades, it was responsible for loading and unloading uranium fuel at sea for Russia’s nuclear icebreaker fleet.

The Lepse’s history took a darker when it was used to help dump radioactive waste in the Kara and Barents Seas, contributing to Russia’s Cold War heritage of f nuclear and radiological hazards strewn across the Arctic sea floor, the extent of which is only beginning to be understood.

By the time the Lepse was taken out of service in 1988, it had amassed some 639 nuclear icebreaker fuel assemblies, many of which were damaged when it helped refuel the Lenin Icebreaker on two occasions in 1965 and 1967. These damaged assemblies, many of them swollen and misshapen, defy removal by conventional means.

For years after, the Lepse languished at dockside within the port of Atomflot, the Murmansk base for Russia’s nuclear icebreaker fleet, all while the spent fuel assemblies and other pieces of radioactive waste were still aboard. Its state of neglect grew dangerous. What was now the most radioactively contaminated ship in Russia was parked only four kilometers from the center of Murmansk, and its population of 300,000.

It was in the early 1990s that the Lepse and the dangers it posed caught Bellona’s eye, and the organization mobilized the European Union to allocate funding toward removing it from Murmansk harbor and safely dismantling it.

The boat was finally towed from Atomflot to the Nerpa naval shipyard in September 2012, after more than a decade of strenuous and often tedious negotiations among Bellona, the Russian government and European financial institutions – most notably the European Bank of Reconstruction and Development – to ensure the Lepse’s safe disposal. 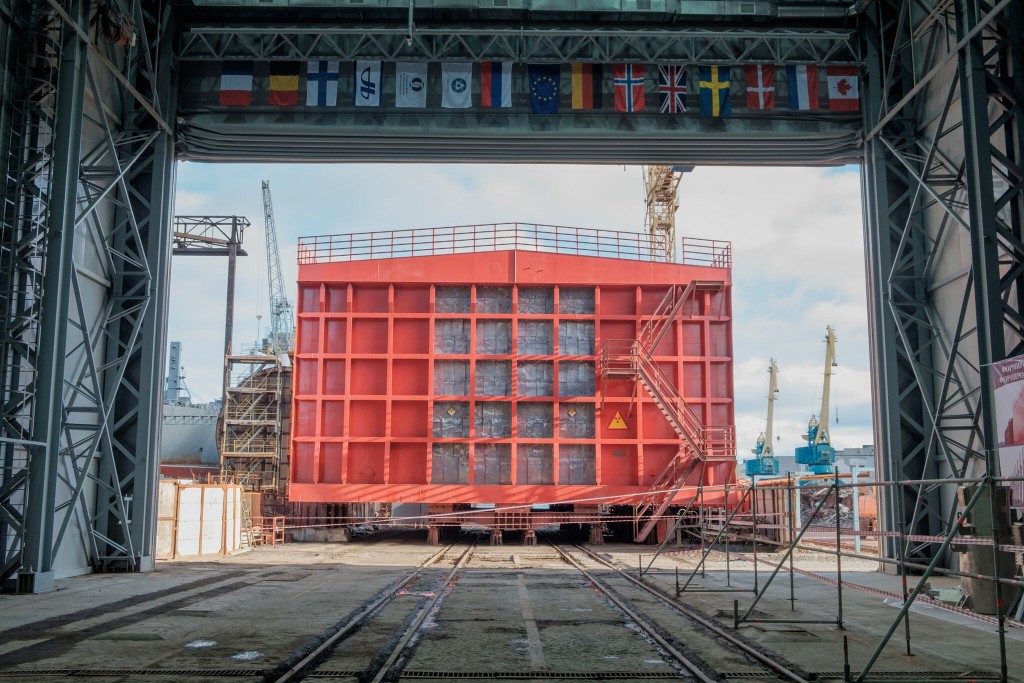 Once it got to Nerpa, the 79-year-old Lepse ran into a bureaucratic and physical traffic jam and bobbed neglected on the water until 2014, when, during foul weather conditions and thick fog, it was finally docked.

When the Lepse was finally in dry dock, its structure was cut into five sections, or “storage packages.” Those consists of the stern section, which is said to be relatively uncontaminated; the section with liquid radioactive waste tanks; the engine and boiler room, and two packaged bow sections, one of which contains the notorious 639 spent nuclear fuel assemblies.

Now, say officials at Nerpa, all that remains of the vessel is the bow section. Those packages containing the vessel’s other sections have been taken for storage at Sayda Bay, a refurbished storage site on the coast of Kola Bay where dozens of reactor compartments from other nuclear vessels are kept.

But the work ahead is likely the most demanding. According to Alexander Malyshkin, Nerpa’s project manager for decommissioning the Lespe, technicians have now begun the painstaking process of sawing the notorious spent fuel elements out of the bow section, which is housed at the shipyard in a special radiation shelter. Two of the elements have already been removed with the remainder to follow by June 2020.

The radiation conditions within the shelter are dangerous, and most of the work, said Malyshkin, is accomplished using remote controlled arms. Technicians have to periodically enter the shelter to set these remote manipulators, but their exposure to radiation is strictly monitored.

“The time intervals during which a person can be in the presence of ionizing radiation are strictly observed,” said Oleg Khalimullin, the deputy chief engineer for nuclear fuel and radioactive waste treatment at Atomflot. “I can assure you that the work is structured in such a way that the staff experienced exposure for the shortest possible time.”

The work of cutting out the spent nuclear fuel assemblies began on May 15. The first 620 undamaged assemblies will be removed first. After that, technicians will take on the damaged spent fuel that the Lepse unloaded from the Lenin. When the spent fuel is finally unloaded safely, it will be sent to the Mayak Chemical Combine in the Southern Urals for reprocessing.

Anna Kireeva contributed to this report from Murmansk