Lithuanian officials have renewed their longstanding opposition to a nuclear power plant Russia is building in neighboring Belarus, this time by asking Minsk to convert the nearly complete plant to a liquefied natural gas facility.

Published on March 4, 2019 by Charles Digges

Lithuanian officials have renewed their longstanding opposition to a nuclear power plant Russia is building in neighboring Belarus, this time by asking Minsk to convert the nearly complete plant to a liquefied natural gas facility.

The request came from Lithuanian Prime Minister Saulius Skvernelis, who suggested to Reuters that the Ostrovets nuclear power plant – under accident-prone construction for over ten years – could be retooled to run on Lithuanian natural gas.

“It’s up to Belarus to make a choice: to keep on having an energy sector which depends on the policies of a single country, or to make a strategic change,” Skvernelis said in remarks to Reuters on Tuesday, avoiding the mention of Russia, which is the dominant supplier of energy to Belarus.

“Lithuania could be a good example and a useful partner for Belarus,” he added.

Skvernelis’ remarks come as he mounts a bid for the Lithuanian presidency, but whether or not his proposal is taken seriously, it refreshes at a high level his country’s misgivings about the Belarusian nuclear plant, which is being built only 50 kilometers from Vilnius.

Lithuania has long opposed the plant on grounds of safety, saying that its Russian VVER-1200 reactor, which is scheduled to begin operations in 2020, is not being built to accepted safety standards. Rosatom, Russia’s state nuclear corporation denies.

But numerous incidents at the reactor’s construction site have made Vilnius understandably jittery. In 2016, builders at the Ostrovets site made headlines when a crane operator dropped a 330-ton reactor pressure vessel, a sensitive structure that houses the reactor core, from a height of four meters. Another reactor pressure vessel bound for the plant was accidentally run into a cement column when it was being unloaded from a railcar.

Vilnius has also said the plant violates numerous transnational environmental agreements, like the Espoo convention, which demands that Belarus’s neighbors be given a chance to review the plant’s environmental impact on their own territories.

But that has never been done. As a result, Lithuania’s parliament outlawed the purchase of power from what its new legislation law called “unsafe” nuclear power plants – though the target was clearly the Belarusian plant. 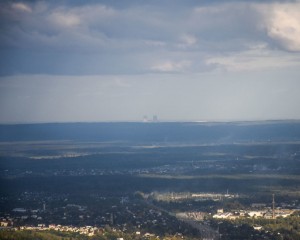 Meanwhile, Lithuania’s ambassadors throughout Europe have made a point of speaking out against the plant, which Minsk is financing with an $11 billion loan from Moscow, to draw other countries to their cause.

They are finding a receptive audience. Many politicians and commentators in West fear that Russian-built nuclear power plants cast Moscow’s political influence into the hearts of European capitals. By offering generous financing terms, they say, Moscow can build allegiances that are forged on more than financial debt.

Hungary, and the right-wing government of Viktor Orban, provides a worrying example. The country relies on a Soviet-built nuclear power plant for 50 percent of its electricity. In 2017, Hungary signed a $12 billion deal to replace the ageing plant with one of Rosatom’s VVER-1200 reactor. It’s unlikely that politics of the Orban regime – which is on warm terms with Vladimir Putin – would collide with the Kremlin’s.

But just in case, the reactor deal not only specifies that Hungary must pay Moscow back. It also stipulates that Rosatom, Russia’s state nuclear corporation, will run the plant for the first 50 years it operates. Rosatom’s deal with Belarus – a cloistered Moscow-friendly dictatorship – was made on similar terms.

It is this kind of energy imperialism that Lithuania presumably fears. If Moscow can sustain anti-Democratic governments with nuclear dependence, the small and vulnerable ex-Soviet republic could find itself in the midst of an existential crisis. In the event of a nuclear accident at Ostrovets, all of Lithuania might have to be evacuated. It might even cease to exist.