After years of secrecy surrounding the Akademik Lomonsov, Russia’s controversial floating nuclear power plant, Russia’s state nuclear corporation Rosatom has finally allowed foreign environmentalists on board to give it a look.

Published on October 1, 2018 by Charles Digges 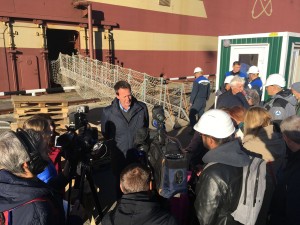 After years of secrecy surrounding the Akademik Lomonsov, Russia’s controversial floating nuclear power plant, Russia’s state nuclear corporation Rosatom has finally allowed foreign environmentalists on board to give it a look.

Those environmentalists were Nils Bøhmer, Bellona’s general manager, and Oskar Njaa, an advisor with Bellona’s Russia group, and last week, accompanied by Bellona’s staff in Murmansk, theirs were among the first eyes from outside Russia to see the inside of Russia’s most recent answer to mobile nuclear power.

While the visit didn’t lead to many new revelations about the $480 million, dual reactor barge that Rosatom plans to tow through the Arctic to far eastern Siberia next year, it still represented a small but significant peek behind the curtain Rosatom has kept drawn over the project since its inception.

But the opportunity to kick the tires of what some environmental groups have called a “nuclear Titanic” couldn’t quell Bellona’s objections to the plant going into operation – objections it has exhaustively detailed in a report it wrote as many as seven years ago, when the project was still in its infancy.

While Bøhmer hailed Rosatom’s step in the direction of transparency, he told local reporters that “we are still concerned over all issues relative to the operation of this floating nuclear power plant.”

Bellona's Oskar Njaa in the control room of the Akademik Lomonosov. Credit: Bellona

The Akademik Lomonosov is presently moored in Murmansk, where technicians from Atomflot, the home of Russia’s nuclear icebreaker fleet, are fueling its two reactors with uranium.

After the reactors are tested, the plant will be towed by tugboat more than 5,000 kilometers via the Arctic to Chukotka, on Russia’s Pacific Coast, where its 70 megawatts of power will be plugged in to the grid in the port of Pevek by the end of 2019.

During the 12 troubled years of its construction, the Russian government was less than forthcoming about that plant.

But that began to change last April when it finally left St. Petersburg, and burst into the curious and apprehensive gaze of the international media. While Russia was keen to introduce the plant as the first of many, Greenpeace dubbed it a “Chernobyl on ice,”– a nod to its chilly destination.

For many years, Rosatom had planned to load the Akademik Lomonosov with uranium at the Baltic Shipyard – located in the midst of a city of 5 million people and just kilometers from tourist meccas like St. Petersburg’s Hermitage Museum. But that worried Russia’s Baltic and Scandinavian neighbors.

Intervention from Norway’s foreign ministry, spurred by Bellona, secured a promise from Rosatom not to fuel the nuclear barge until it had been towed past the country’s North Sea coast.

Yet even after this overture, Rosatom continued to limit public scrutiny, once scrubbing a tour of the plant for independent nuclear experts, including Bellona’s Alexander Nikitin, who had been invited to take a peek under its hood.

Apparently cowed by the worldwide media frenzy over the Akademik Lomonosov’s departure for Murmansk, Rosatom lifted the veil slightly, allowing Bøhmer, a closer look at the plant as it was towed past Norway’s western coast from a boat drawn up beside it.

Ever since, Vitaly Truntev, who oversaw the build of the floating plant for Rosatom, has promised to be more transparent about its progress toward its destination in the Far East – and last week’s visit by Bøhmer and Njaa broadened that cooperation.

For now, Bøhmer said Bellona wants to continue receiving updates about the nuclear barge’s preparations for its voyage east. 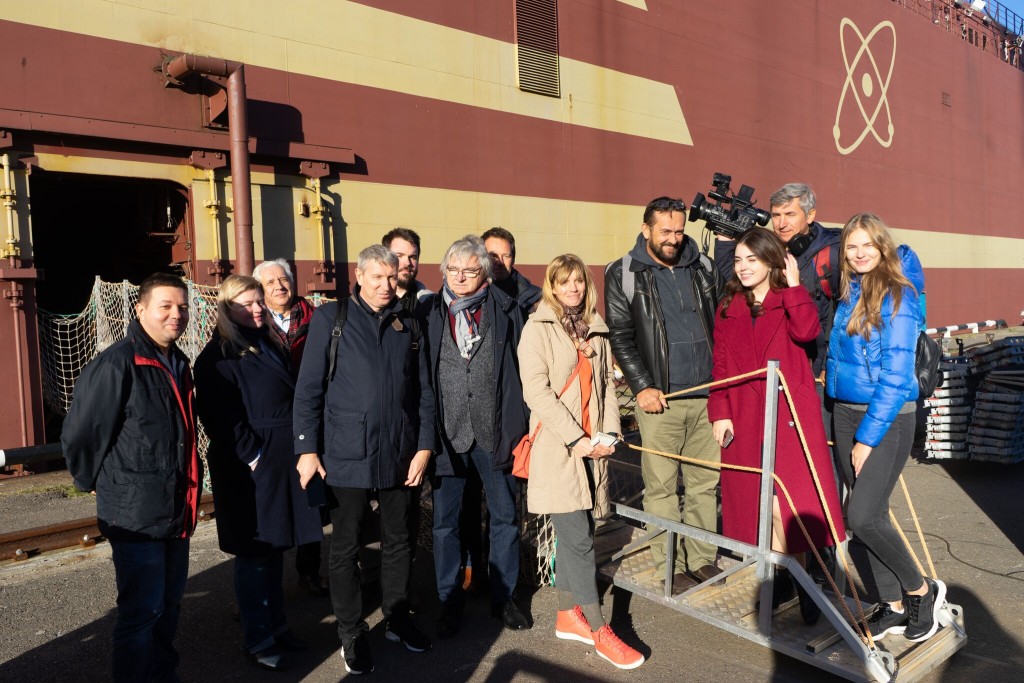 Bellona Staff and members of the Russian media on the gangway of the Akademik Lomonosov. Credit: Bellona

“The fuel is not completely loaded into the reactors yet, and we are currently concerned about the fueling process and subsequent tests after the reactors are started,” Bøhmer said.

Still, the new openness has done little to settle Bellona’s central concerns about Rosatom’s long-range intentions for the floating nuclear power plant. By design, the plant is meant to operate in remote operations. But this very remoteness, Bellona has said, would vastly complicate the rescue operations that would be necessary after an accident, as well as the more routine clearing of spent nuclear fuel from its reactors.

Likewise, the visions of Fukushima’s waterlogged reactors have not faded from public memory, and the thought of a nuclear power plant as vulnerable to tsunamis and foul weather as is the ocean-based Akademik Lomonosov strikes an anxious chord among environmentalists.

Rosatom has often said the Akademik Lomonosov is invulnerable to tsunamis, and cite the fact that its ocean-borne location will give it access to infinite supplies of reactor coolant in the event of an accident.

But environmentalists are skeptical. In the worst-case scenario, the plant might not ride out the waves, and instead be torn from its moorings to barrel inland through buildings and towns until it lands, battered and breached, with two active nuclear reactors on board – well away from its source of emergency coolant.

Rosatom’s best option in that disaster scene would be the 24-hours worth of backup coolant located aboard the barge, which is hardly reassuring.

The company estimates each floating plant will take four years to build, compared with a decade or so for standard land-based nuclear plants. The Sudan Tribune has cited that country’s minister of water resources and electricity as saying the government in Khartoum has a deal to become the first foreign floating plant customer.

This deal struck Bøhmer as frightening. Aside from the possibility that uranium fuel of a high enrichment could fall into terrorist hands in underdeveloped countries, he said the main issue was a question of technical competence.

“I fear theof use of nuclear technologies in countries where the level of nuclear and radiation safety, industry regulation and safety standards are not as high as they are in Russia,” he said. “How will they handle spent nuclear fuel, and react to emergency situations? How can you use nuclear power plants in when a country has no experience using them, or even has any regulations?”