In a major blow to one of Russia’s most ambitious international nuclear deals, three investors backed out of the Akkuyu Nuclear Power Plant, leaving Russian state nuclear corporation Rosatom adrift on how to finish the $20 billion station.

Published on February 12, 2018 by Charles Digges

In a major blow to one of Russia’s most ambitious international nuclear deals, three investors backed out of the Akkuyu Nuclear Power Plant, leaving Russian state nuclear corporation Rosatom adrift on how to finish the $20 billion station.

Russian President Vladimir Putin touted progress on the plant as recently as November during a state visit to the Turkish capital, and the Kremlin propaganda news network RT pushed the narrative that the plant’s first reactor would be finished ahead of its scheduled 2023 launch date.

That was all thrown into doubt last week when a Turkish consortium, representing 49 percent of the funding for the Akkuyu plant’s construction, backed out of the deal, citing a failure to agree on a number of project’s “commercial conditions,” Russian and Turkish news outlets said.

Rosatom is now in talks to secure other investors, but the corporation wont’ say by how long the loss of half the project’s financing will delay the station’s launch, or by how much the project’s price tag is likely to increase as a result of the back out.

It’s not the first time the Akkuyu project has been put on ice over a lack of funding – and it wouldn’t be the first time Rosatom was forced to stop construction because foreign investment failed to materialize behind the AES-2006 unit – the company’s banner product abroad which has been plagued with hiccups at home.

Rosatom initially persuade Turkey to build the Akkuyu plant in the early 2000s, when Ankara signed a memorandum of understanding with Moscow. At the time, however, the projected returns on the energy it would produce were too low for Ankara to finance its half of the bargain.

Rosatom them proposed to build the plant at its own expense, a plan by which Russia would have constructed, operated and owned the Akkuyu plant. But a downturn in the Russian economy saw funding for that effort dry up.

Last year, the government in Ankara – whose authoritarian regime is on warm terms with Putin – stepped back in with a promise to drum up investment, and declared the nuclear power plant a “national priority.”

Still, the terms didn’t appeal to two of its main investors – the Turkish firms Kolin and Kalyon – who announced their departure from the project last Wednesday. Some observers have suggested the next step for the hard-line regime in Ankara might be to just force investors to participate.

Rosatom has said it’s now in talks with Cengiz Holdings, the one Turkish company that remained in the deal as the plant’s contractor, about attracting a single investor to make up the now missing half of the needed funding.

Regardless of how that turns out, it marks yet more turbulence for Rosatom’s efforts to sell the AES-2006 – also known as the VVER-1200 reactor – to foreign customers.

In 2011, efforts to corral investors behind a VVER-1200 at Baltic Nuclear Power plant, which was slated for the Russian enclave of Kaliningrad, sputtered when investors from Poland fled the project. Further afield in South Africa, courts have stopped another multibillion dollar VVER-12000 project over allegations of corrupt dealings with the government in Johannesburg.

In neighboring Belarus, a VVER-1200 construction project has been skewered by the governments of Lithuania and Poland after a series of potentially catastrophic mishaps at its construction site. At one point, workers dropped the reactor’s 330-ton pressure vessel, and Rosatom was forced to replace it. Ironically, the dropped vessel had initially been built for the defunct VVER-1200 project in Kaliningrad.

Rosatom has meanwhile papered much of the globe with its memorandums of understanding to build the VVER-1200, signing deals with countries as disparate as Ethiopia, Jordan, Algeria, Nigeria and Bolivia – most of which won’t have the infrastructure for nuclear power for decades. 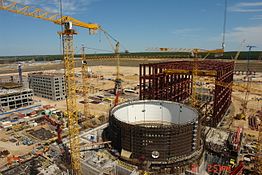 The AES-2006 under construction at the Novovoronezh Nuclear Power Plant. Credit: Wikipedia

In the end, that lack of infrastructure may serve them well, because at home, the VVER-1200 has proved to be a dicey product – something Rosatom has worked to hush up.

After Russia’s very first VVER-1200 reactor went into service at the Novovoronezh nuclear plant, it was shut down for two and a half months after it short circuited.  Rosatom kept the breakdown under wraps, but worried locals went to the press suggesting more was afoot than just a mechanical failure.

Rosatom was eventually forced to respond to the hysteria, but in doing so revealed that the prototype of the VVER-1200 contained a cooling system flaw. This prompted what Rosatom termed a series of  “modernizations,” which it undertook at three other VVER-1200s it was building within Russia – one at the Leningrad Nuclear Power Plant, the one in Belarus, and at a second VVER-1200 under construction at Novovoronezh.

It’s still unclear whether these modernizations apply in Hungary, where Russia is building two VVER-1200s at the Paks II nuclear power plant – reactors financed by a €12 billion loan from Russian taxpayers.

Unless Rosatom finds other investors for Akkuyu, Russian taxpayers are likely to finance that VVER-1200 reactor as well. But given the reactor’s glitchy history, they won’t be the only ones feeling the sting of buyer’s remorse. The rest of the world will be suffering it too.