It won’t come as a surprise that safety would be a critical challenge still facing the nuclear industry in Ukraine, which inherited the infamous Chernobyl plant when the Soviet Union collapsed. Nearly as surprising has been the comparative lack of concise information on a national industry that supplies more than half of its country’s electricity in conditions of political and economic turmoil.

Published on January 24, 2018 by Charles Digges

It won’t come as a surprise that safety would be a critical challenge still facing the nuclear industry in Ukraine, which inherited the infamous Chernobyl plant when the Soviet Union collapsed. Nearly as surprising has been the comparative lack of concise information on a national industry that supplies more than half of its country’s electricity in conditions of political and economic turmoil.

With this in mind, Bellona has today published its report, The Ukrainian Nuclear Industry: An Expert Review. The report is a collective effort by experts and academics on the inside of the country’s ailing industry, and Bellona hopes it will serve as a guidepost to international non-profits and policymakers who aim to assure the industry’s safety and eventual decommissioning while Ukraine makes its arduous transition to cleaner energy sources.

There’s much to be done.

Many of the problems surrounding Ukraine’s nuclear industry are ones of youth. It didn’t really exist before Kiev declared its independence from Moscow in 1991, but when it did, it put itself in charge of some of Europe’s most elderly reactors, as well as nuclear power’s original sin: Chernobyl’s number 4 reactor, which exploded in 1986. 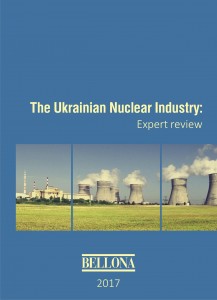 And while the bulk of international attention and funding for Ukraine has been focused on bringing that disaster and its lingering aftereffects to heel –efforts that spurred engineering achievements like Chernobyl’s New Safe Confinement – Ukraine’s 15 other Soviet-built reactors have begun to hobble unsteadily toward retirement.

At the same time, these reactors, running at four separate nuclear power plants, supply 52 percent of the country’s electricity. It’s unlikely that Kiev will find the political will, let alone the funding, to retire any of these reactors anytime soon.  This means most if not all of them will likely receive extensions of several years time on their engineered life expectancies, and continue to add to a supply of radioactive waste that is the second biggest in Europe for decades longer.

In 2018, this problem will only get more burdensome when Russia, as per a long standing agreement, returns to Ukraine the spent nuclear fuel and radioactive waste it has been accepting and reprocessing since the Soviet Union’s dissolution.

The problem of Ukraine’s overabundant radioactive waste would seem less critical if the country were taking steps to build a long term repository, such as finding a suitable location for one – or indeed even had plans to do so. But as our report reveals, the bureaucracies in Kiev that are responsible for this are inefficient if not, in some instance, entirely lacking, and in any case have little in the way of public faith in their competent operation.

Prospects are slightly brighter when it comes to dealing with spent fuel from Ukraine’s nuclear reactors. Officials know how much there is and are wise to the fact that they have to build a centralized facility to store it. But as is the case in other parts of the industry, Kiev has little hope of building it without significant funding from other countries.

Overseeing all of Ukraine’s nuclear reactors and the waste and spent fuel they produce is a national nuclear regulator whose basic structure is, like the industry itself, a hand-me-down from Moscow, and it lacks independence from the structures it is supposed to be regulating. And even this imperfect arrangement is suffering financially.  As our report reveals, event the computers the regulator uses are donated from abroad.

Those among the Ukrainian public who could raise awareness about these issues face dismal prospects as well. What few environmental organizations there are tend to be poorly funded and lack the expertise they need to engage effectively with policymakers within government.

Finding ways to manage its nuclear inheritance from Russia is, in crucial ways, also a question of Ukraine’s ongoing political independence. It is, after all, Russian fuel that runs Soviet reactors. Kiev has started buying more specially fabricated nuclear fuel from from western corporations, but further untying the country’s tangled nuclear knot will require other forms of international engagement.

Kiev seems to be be grasping the rudiments of that, and dozens of countries from Europe to China are investing in a solar farm, which, emblematically, is set to open within the irradiated wastes of the Chernobyl exclusion zone this year.

Yet there is much more rubble to build on. With our new report, we hope to provide safer foundations so Kiev can build a safer energy future less dependent on its Soviet nuclear past.