At current, all four reactors at the Kola Nuclear Power Plant near Murmansk are expected to run fully twice as long as their originally engineered 30-year lifespans Yet the plant’s director still insists that only by building yet a second nuclear power plant on the Kola Peninsula will the area cope with a bloom in economic development.

Published on December 6, 2017 by Charles Digges 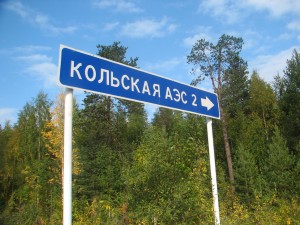 A road sign to the Kola NPP. (Photo: Anna Kireeva/Bellona)

At current, all four reactors at the Kola Nuclear Power Plant near Murmansk are expected to run fully twice as long as their originally engineered 30-year lifespans Yet the plant’s director still insists that only by building yet a second nuclear power plant on the Kola Peninsula will the area cope with a bloom in economic development.

Director Vasily Omelchuk has said that the plants No 1 reactor has already been running for 45 years. Its operating license runs out in 2018, but that’s planned to be extended another 15 years until 2033.

“We have done a colossal amount of work to examine every component of our plant for possible future operation and determine its resources,” he told reporters in Murmansk. “As a result, we approved the implementation of an investment project to further extend the lifespan of the first reactor for another 15 years. In other words, we intend to work each of our reactors for 60 years.”

He went on to say that because the first reactor will hit its 60th birthday in 2033, replacement energy capacity should be at the ready to replace it – and that, Omelchuk said, can only be provided by building a whole new, or second, Kola Nuclear Power Plant.

Inside reactor no 1 at the Kola Nuclear Power Plant. (Photo: Wikipedia)

“All of the relevant decisions for this have already been made,” he said. “A government decree indicated that in 2024, construction on the Kola NPP-2 will begin. This decree refers to the construction of a VVER-600 reactor with a 600 to 650 megawatt capacity. The subtlety lies in the fact that there is no project for this particular reactor at present. In Soviet times there was such a project and in the 1990s, on the site of the Kola NPP-2, they started the construction of this type of reactor. For various reasons, construction was stopped, and the project was made obsolete. As of today there is no ready-made VVER-600 project. However, there are sketchy projects and there are elaborations.”

The government decree to which Omelchuk was referring was signed by Prime Minister Dmitry Medvedev in August of 2016, and it approves a territorial energy planning scheme.

As that far as that concerns the Murmansk Region, the scheme doesn’t only outline a plan for launching a second Kola nuclear plant with one VVER-600 reactor. It also envisions the expansion of the region’s Serebryanskaya hydroelectric plant before 2025, and the construction of two wind farms with a total capacity of 400 megawatts.

This month’s International Business Week in Murmansk put a good deal of focus on the development of renewable energy. In particular, the multinational energy company Enel made an official announcement that it would build a 201 megawatt wind park in the region by 2021.

“They can not be our competitors,” Omelchuk said of Enel, adding that, “In 2033, we will have to withdraw our No 1 reactor from service, and it will be necessary to replace it with something. Wind energy can not cope.”

Omelchuk noted that the year – 2033 – is only conditional and depends on the development of the Murmansk Region’s economy. If energy consumption grows at the current pace, which according of Omelchuk is 2-2.5% per year, then there would be no need to introduce new reactors units before then. However, he said if power consumption significantly increases, the need for additional capacity will arise earlier than 2033.

This is hardly the first time that the nuclear industry has claimed that without these old reactors, the Murmansk region will sink into electrical shortages unless it increases the capacity of the Kola nuclear plant, which in any case is only currently operating at 60 percent of its capacity.

It bears recalling that in 2012, the Kola nuclear plant received the go-ahead to increase the capacity of its No 4 reactor to 107 percent. Yet for the several years it had permission to operate at that capacity, it did so for a mere 100 days. The plant’s No 3 reactor has also received a nod to operate at 107 percent, and has only done so for a handful of days.

Yet that’s exactly why the Kola nuclear plant, which is capable of generating 14 billion kilowatt hours a year, routinely generates only 10.2 billion kilowatt hours. And it is producing that much with one of its reactors standing idle. The region doesn’t demand that the plant produce more. Meanwhile, the Serebryanskaya hydroelectric plant is also capable of producing power but routinely doesn’t. To this will soon be added the 201 megawatts from the wind farm.

The demand for energy in the Murmansk region continues to be low. Yet the nuclear industry continues to cite mythical investors that are swooping in to gobble up all the region’s power resources. Natural gas giant Gazprom’s Shtokman project faltered long ago, and with it, the urgent need for a huge energy capacity boost. It would be remarkable if any new industry or project requiring even 100 megawatts of electricity appeared in the region. But for now, the last thing we need is another Kola Nuclear Power Plant.