While lighthouses run on atomic batteries in Russia have become rare, especially along the coasts of the Baltic and Barents Seas, they still have their adherents in the country’s Far East.

Published on September 14, 2017 by Charles Digges 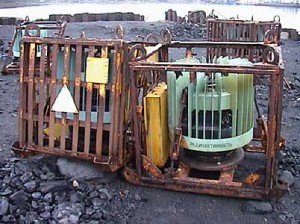 While lighthouses run on atomic batteries in Russia have become rare, especially along the coasts of the Baltic and Barents Seas, they still have their adherents in the country’s Far East.

A group of radioactivity tracking sleuths on Sakhalin Island in the Pacific say they have hunted down an abandoned generator that ran on strontium-90 sunk off the shores of one of its premier beach resorts.

But that, they say, is just the tip of the iceberg: The discovery lies in the middle of a radioactive graveyard that includes no fewer than 38 sunken vessels containing nuclear waste, and two nuclear warheads that went down when a Soviet bomber crashed near the island’s southern tip in 1976.

Though the Russian Ministry of Defense recently began acknowledging the lost bomber, tracing the origins of the other nuclear cast offs is not so easy.

But at least, says Nikolai Sidirov, mayor of the coastal town of Makarov on Sakhalin’s Bay of Patience, his town knows what this new discovery is – and they want it raised from the depths with the rest of the glowing junk.

Speaking to Novaya Izvestiya, a popular tabloid that morphed out of the official Soviet-era mouthpiece Izvestiya, Sidirov said satellite photos tracking the location of the crashed bomber have turned up something else lurking under the waves: An RTG.

That’s short for Radioisotope Thermoelectric Generator, a small radioactive energy source that for decades powered thousands of Soviet lighthouses and other navigational beacons along Russia’s Baltic, Arctic and Pacific coasts.

After the fall of the Soviet Union and the crash of the Russian economy, officials lost track of many of the RTGs as bureaucracies collapsed and records went missing. Thieves pillaged them for their valuable metal, exposing their strontium innards. Hikers and shepherds, drawn to their atomic heat, would stagger out of the woods sick with radiation poisoning.

Around Murmansk and on the Pacific coast, frightful reports about strontium elements turning up on beaches proliferated in local media. Some newly independent Soviet republics telegraphed anxieties about their inherited RTGs back to Moscow – along with requests to come take them away. 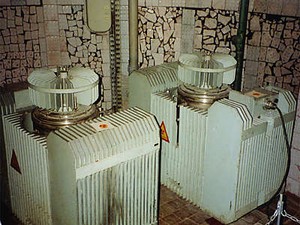 And then there was the biggest fear of all: What if strontium 90 from these virtually unguarded, remotely radiological sources ended up in the hands of terrorists who wanted to make a dirty bomb?

So far, that hasn’t happened – anybody trying to make off with a strontium battery would likely end up very ill or dead. But when three woodsmen in the former Soviet Republic of Georgia turned up in a hospital with radiation burns and caught the attention of the International Atomic Energy Agency, the dangers of orphaned Soviet RTGs were finally on everyone’s mind.

A colossal effort spearheaded by the Norwegian government entirely rid the coasts of the Barents, Kara and White Seas of more than 180 RTGs. By infusing €20 million into the push, Norway helped Russia replace the strontium 90 batteries on these lighthouses and beacons with solar power over a six year period ending in 2015.

In all, Rosatom, Russia’s state nuclear corporation, says it has decommission more than 1000 RTGs throughout the country, adding that it has mostly eliminated the hazard of these stray radioactive sources from its coastlines.

But some areas have not been so lucky, at least according to the mayor of Makarov out on Sakhalin Island, six times zones east of Moscow.

Sidirov, a feisty campaigner who had been publicly heckling the capital about the nuclear trash in the seas near his town for years, says divers have located the RTG, and that he now has the coordinates of where it lies. He told Novaya Izvestiya he will pass on the RTGs location to what he calls “competent authorities” lest it end up in scheming hands.

How the RTG, which lies in 14 meters of water, came to be there is still anyone’s guess. The Russian Navy sent a statement to the newspaper insisting that all RTGs under the purview of the Pacific Fleet have been hunted down and destroyed.

But Russia’s environmental oversight agency confirmed that there were numerous radioactive foundlings in the oceans off Sakhalin Island, though they didn’t identify Sidirov’s RTG specifically.

It certainly wouldn’t be the first time someone screwed up with an RTG in the area, however. Twenty years ago, in 1997, a helicopter from Russia’s Emergency Services Ministry accidentally dropped a strontium-powered RTG into Sakhalin’s waters. It was later retrieved by the navy.

So far, Rosatom has remained mum on the veracity of Sidirov’s claim about the RTG. But since the history of the downed bomber and the other hazards in his area has been confirmed, there’s every reason to believe him about the RTG. And he wants it gone.

“The ecological authorities and the military, they’re being very stubborn about coming to collect it,” Sidorov told Novaya Izvestiya. “It’s there job to collect it – if they’re ever interested, I’ll be here to show them exactly where it is.”