What’s the good of running Kola nuclear plant reactors beyond their capacity?

MURMANSK – As 2016 wrapped up, the Kola Nuclear Power Plant held a public hearing to clear its plan to operate its No 3 reactor at 107 percent its capacity. The hearing’s participants warmly endorsed the experiment, but neglected to address one point – why does the plant need to run the reactor beyond its capacity?

Published on January 9, 2017 by Anna Kireeva 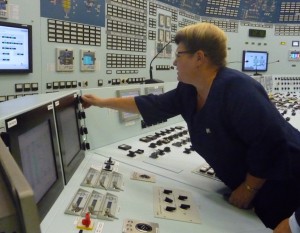 MURMANSK ­– As 2016 wrapped up, the Kola Nuclear Power Plant held a public hearing to clear its plan to operate its No 3 reactor at 107 percent its capacity. The hearing’s participants warmly endorsed the experiment, but neglected to address one point – why does the plant need to run the reactor beyond its capacity?

The hearing itself passed in the usual fashion and everyone agreed to support the power boost. Vasily Omelchuk, the director of the plant where all four reactors are running on life span extensions, assured everyone that the power boost on the old reactor was entirely safe.

That may not be exactly correct. All of the plant’s reactors went into service between 1973 and 1984, and all are operating on sizable engineering runtime extensions. The No 3 reactor specifically is slated to run until 2026, 25 years after it’s original close down date.

The fact that 200 people could show up after a work day a few days prior to Russia’s main holiday season for a technical hearing didn’t seem suspicious to anyone. There’s no doubt the project will get a green light on its environmental impact study and that Russia’s main environmental authority will permit running the reactor beyond its nominal power.

The only question remaining is: What for? What’s the reasoning behind running an old reactor at 107 percent in a region that already has more energy than it needs?

The Kola Nuclear Plant’s No 4 reactor has been licensed to run at 107 percent since 2012. In that time, the reactor has only been run at boosted power for a total of 100 days, indicating there’s really no need for the extra production. The plant’s control room keeps its power output at 60 percent of its entire capacity. The area’s hydroelectric station puts out only 50 percent of its capacity.

In short, the Murmansk Region has energy it can’t burn. That’s why the control rooms of the big area energy sources put limits on how much they put out.

Justifications for power boosts to the No 3 reactor at the Kola Nuclear Power Plant have centered on satisfying “potential investors” for decades, and they doubtless will in the future. So far, there aren’t plans for any big energy-gobbling enterprises in the area. If there were, we probably would have heard of them by now. Certainly no one at the hearings named any concrete facts and figures relative to any new energy intensive development plans.

And here we’re not talking about whether nuclear energy is a good or bad thing. What we’re talking about is that boosting the plant’s output simply to improve its economic indices is entirely unneeded.

Why the bait and switch to convince the population of the whole Region that the interests of one enterprise are somehow aligned with its interests, and that all of this is so sorely needed for “industrial development in the region and the country” as was said at the hearings?

One of those who attended the hearings was Alexei Veller, a former mayor of Murmansk and now a Duma deputy who sits on the committee for economic policy and industrial activity. He repeatedly drew attention to the fact that he was no expert in nuclear and radiation safety.

But as someone with a managerial perspective, as he was talking with the press, and perhaps without wanting to do so specifically, he identified the reason for carrying the project out.

“This is a question of economic efficiency,” he said. “The project assumes deep modernization of equipment that was put into service in the 80s of the last century, which will guarantee more efficient work of the plant.”

It’s worth remembering that six months ago plant director Omelchuk revealed the real reason behind wanting to boost the power output at the No 3 reactor.

“The main problem is that we can’t produce as much energy as our capabilities allow,” he said to reporters last year. “We are currently producing 10 million kilowatts of electricity and we could produce 14 million. Because we are producing 30 percent less than we can, the Kola NPP is running at a loss. The higher the capacity, the more economical the installation. Running output up to 107 percent will give us an economic effect, and that’s good for us.”