The floating nuclear plant, after numerous delays and cost overruns is expected for delivery from St. Petersburg’s Baltic Shipyard this year, and is said to be the first of two Rosatom intends to build, the second due by 2030.

The Akademik Lomonosov will be towed from St. Petersburg, along the coast of Norway with its fuel already in its reactors, and finally to the Far East port of Pevek in the Chukotka Region of the Kamchatka Peninsula. There, it will make up for power deficits caused by closing the Bilibino nuclear power station in 2021.

But Rogozin, a great booster of militarizing the Russian Arctic, has said in an eleventh hour vent that he’d like to see the Akademik Lomonosov and other floating plants stripped down to bare floating “batteries,” according to Interfax.

He also said he’d talked with unspecified colleagues, who he says agree with him.

If so, that could delay the 10-year construction of the Akademik Lomonosov even more as the Baltic Shipyard tears down what it had built up.

Pull down and redo

Rogozin’s first suggested cut to the construction was the living quarters, common areas and other service and recreation facilities for the crew.

“We only need a battery that we can compactly send via water to [Pevek],” said Rogozin according to Interfax. “There should be many of these batteries, you don’t need to build a city at sea.”

He elaborated with what he’d like to see scrapped from the Akademik Lomonosov.

“Think of an enormous metal construction in which the reactor is just a compact construction and the rest is a nine story building for all the workers on this floating station,” he said. “They have a pool, they have a basketball court all year round and I ask, why is this needed?”

The remarks, which could potentially snag construction for the floating plant are surprising when Rogozin, in April 2015, announced the $740 million Akademik Lomonosov would be delivered on schedule.

As for where to put the crew, he said: ”Don’t we have the capability to house personnel on shore and sharply minimize the expense of building such structures?”

That might be possible if the shore infrastructure for the Akademik Lomonosov, wasn’t expected to be complete until 2019, three years after the Floating Plant’s arrival. 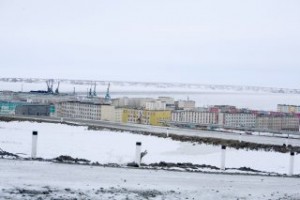 Removing crew quarters, said Nils Bøhmer, Bellona’s executive director and nuclear physicist, could, in fact, be the most dangerous of Rogozin’s suggestions.

“I think a floating nuclear plant without personnel or a minimum of personnel without proper accommodation would severely compromise the safety of the plant,” he said in an email interview. “I’m afraid this focus on cutting costs at this particular plant would increase safety issues already inherent in a floating nuclear plant at a remote location.”

Similarity to past remarks coincidental?

But Rogozin may only be repeating what Rosenergoatom, Russia’s nuclear utility, has held as an article of faith for some time.

In August Sergei Zavyalov, deputy director of construction for floating nuclear plants at Rosenergoatom told Kommersant newspaper that new, more compact floating plants were on the drawing board. Zavyalov has further acknowledges that the Akademik Lomonosov – weighing in at 21,500 tons and standing 144 meters long and 30 meters wide –is “experimental.”

Anonymous sources within Rosatom cast doubt on the Akademik Lomonosov’s delivery date as well, putting it at 2021 at the latest and at earliest in 2019, when the Pevek dock infrastructure is expected to be ready.

That future floating plants would undergo changes was no mystery, said Valery Menshikov of Rostom’s public chamber in an interview with the National News Service news portal. 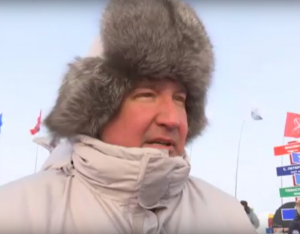 But he was stultified the Akademik Lomonosov would be pulled to pieces, as per Rogozin’s apparent wishes, so close to its scheduled launch.

“Its completely strange when you have to change the whole pattern of a suit while you’re working on it to shorten the sleeve,” Menshikov. “It’s just an amazing thing. It’s neither proper nor serious.”

Rogozin’s press office would not comment on his remarks by press time.

In April 2015, Rogozin’s mercurial jingoism over Russia’s manifest destiny toward the Arctic reached antic proportions when he made a surprise visit to Norway’s Svalbard Archipelago with no visa, and despite sanctions forbidding him to enter Europe for his role in in destabilizing the conflict in Eastern Ukraine.

Rogozin took a dip in the freezing water, donned a hulking fur hat and posed insouciantly for pictures waving a Russia flag to the consternation of Norway’s Foreign Ministry before he departed for the North Pole.

From there, he likened Russia’s conquest of the Arctic to Moscow’s annexation of the Crimean Peninsula in March 2014.

“Last year, we had the historical reunification of Sevastopol and the Crimea,” Rogozin told Russia’s state controlled Channel One (in Russian). “This year, we present a new view and new powerful stress on the development of the Arctic. Basically, it’s all about the same.”