MURMANSK – Above Andreyeva Bay, the notoriously radioactive storage site for spent submarine fuel in Northwest Russia, a helicopter careens out of control, striking a truck carrying casks of spent nuclear fuel. Bam! An explosion sounds as tons of spent fuel are engulfed in toxic flames. Four people are trapped as radioactivity spins off the meter. Can the fire be doused before the poison scatters through the environment?

Published on June 8, 2016 by Anna Kireeva, translated by Charles Digges 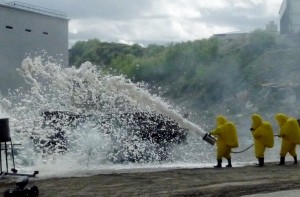 MURMANSK – Above Andreyeva Bay, the notoriously radioactive storage site for spent submarine fuel in Northwest Russia, a helicopter careens out of control, striking a truck carrying casks of spent nuclear fuel. Bam! An explosion sounds as tons of spent fuel are engulfed in toxic flames. Four people are trapped as radioactivity spins off the meter. Can the fire be doused before the poison scatters through the environment?

Such an accident is not even theoretically possible, as during a transport operation such as this, the skies over Andreyeva Bay, mere kilometers from the Norwegian border, would be a no fly zone, Valery Panteleyev, SevRAO’s director, told Bellona in an interview.

These intensive safety exercises – anticipating the theoretically impossible – take place at lease once a year for the last six.

This year’s, conducted last week, involved the participation of Norwegian Radiation Protection Authority. Also involved were a host of Russian agencies from state nuclear corporation Rosatom, the Federal Medical and Biological Agency, the Nuclear Safety Institute of the Russian Academy of Sciences, Russia’s Hydrometeorology and Environmental Monitoring Agency, the Ministry for Emergency Services, and other relevant safety agencies. 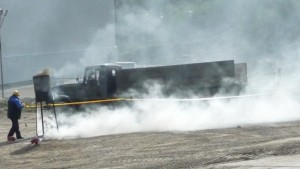 The purpose of SevRAO’s exercise at Andreyeva Bay was to improve the cooperation of these various agencies in dealing with medical crises, rescue operations and other emergencies that could occur in the course of transporting the Cold War legacy site’s 22,000 spent nuclear fuel assemblies from the Russian and Soviet nuclear submarines.

How the exercise played out

The emergency exercise put a special focus on medical attention, including first aid and radiation screening and treatment for exposure.

“We are trying to improve the technologies for delivering first aid so we are prepared for such situations,” said Gennady Frolov from the Federal Medical and Biological Agency. “Here we have distance and imprecision on the source of the radioactive threat. In the given situation when the casks are opened, its complicated to offer a prognosis on the radiation conditions, and very difficult to understand how much activity escaped as a result of the accident. Calculations and rigorous use of computer software are needed in to accurately guarantee against the spread of radioactivity in an accident. 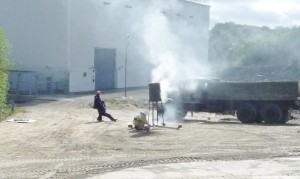 During the exercise all survivors were given medical assistance. But a number of participants were interested in what would happen with the ruptured shipping casks.

Frolov said that damage sustained by shipping casks is a big problem and takes several days to address. First, personnel must be brought to safety, where they can work out a plan to bring things back under control.

“[A cask] is very heavy and a special crane is needed to right it and restore its hermetic integrity,” said Frolov. “This is complicated work and can’t be done quickly. It takes a few days.”

SevRAO’s Pantelev said that, “I can assure you that the shipping cask itself can’t be damaged: they ‘ve been sunk, dropped from great heights.”

“They weigh 40 tons,” he added. “They are made of steel. You might be able to breach its integrity, but you won’t destroy it.” 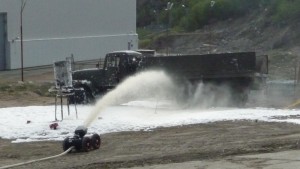 The NRPA followed the training exercises closely, Malgorzata Karpov Sneve, the agency’s International programs director, underscored that political tensions between the West and Russia should not influence international cooperation on nuclear and radiation safety.

“These are very important issues because the threats relative to nuclear installations know no boundaries,” she said. “They can impact the safety of people, therefore our specialists must solve these issues together.”

Anatoly Grigoriev, who oversees coordination and completion of international programs for Rosatom, said all nation donors including Russia to cleanup efforts at Andreyeva Bay had given more than 7 billion rubles ($110 million) to the effort.

To complete the work, another $80 million to $90 million are needed.

More photographs of the training exercise at Andreyeva Bay are available on Facebook.