Russia’s Defense Ministry has announced plans to develop a line of small-scale mobile nuclear reactors that can be deployed from trucks and sleds in the country’s far north, a ministry spokesman confirmed to Bellona by telephone today.

Published on November 5, 2015 by Charles Digges 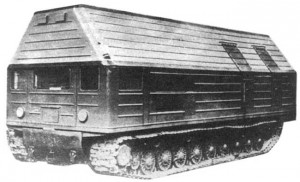 A mobile nuclear power plant as envisioned in the late 1950s in the Soviet Union. (Photo: Englishrussia.com)

Russia’s Defense Ministry has announced plans to develop a line of small-scale mobile nuclear reactors that can be deployed from trucks and sleds in the country’s far north, a ministry spokesman confirmed to Bellona by telephone today.

The Ministry spokesman confirmed Wednesday Russian media reports carried by Tass and others that Defense Minister Sergei Shoigu has ordered the creation of a pilot mobile mini-reactor that would help power military operations in the harsh and remote Arctic climate.

With climate change, melting ice caps, on and off arctic oil exploration and the development of the Northern Shipping Route along its Northern coast, Russia is reestablishing many of its old bases in the Arctic – and that will need energy.

The project proposal left environmentalists and nuclear experts interviewed with a hard choice of whether to laugh or cry. 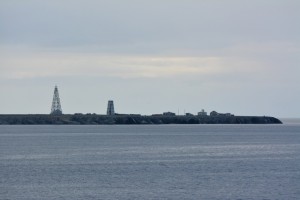 “This is an absolutely crazy idea,” said Nils Bøhmer, Bellona’s executive director and nuclear physicist. He said “an accident with a mobile nuclear reactor in a remote area in the Arctic would have a severe environmental impact with little or no chances of cleaning up any radioactive contamination.”

The crazy idea is under development

Yury Konyushko, the managing director Innovation Projects Engineering Company (IPEC), told Tass in an interview that his company had been contracted by the military to build the pilot reactor – and many more for future deployment.

“The project has already begun and is going through a research stage now,” Konyushko told Tass, adding “There is a demand for no less than 30 such units for the extreme north and different Arctic archipelagos.”

According to Alexander Nikitin, chairman of the Environmental Rights Center (ERC) Bellona, the project envisions that reactors could be hauled around by Russia’s stout KAMAZ freight trucks, by cargo planes, by Mi-26 helicopters – and by sled-type vehicles for snowy terrain.

This last mode of transportation – which was noted in the Tass report – was characterized by Nikitin in an email interview as “novel,” and he suggested the reactors “could be towed by reindeer.”

He added that, “as far as safety is concerned, mobile nuclear power stations are vulnerable at all levels beginning with run-of-the-mill traffic accidents.”

Nikitin said the portable reactor project was nothing new. The Sosny research institute in Belarus developed a few while the country was still a republic of the USSR.

One of these was a 2 Megawatt reactor built in 1961 which could could be carried around on the chassis of a tank, reported the Independent Barents Observer news portal. Another smaller reactor, called Nurka, was installed for submarine bases on the Kola Peninsula, said the portal.

The US even got in on the game, secretly burying a small nuclear reactor at Camp Century in Greenland’s northern ice sheet, which operated between 1960 and 1966, said the Independent Barents Observer.

Because of this, Nikitin was certain the preliminary work for the old project was still lying around and sparked some interest in a Defense Ministry that’s currently replete with funding.

“I think this is a way to launder some money,” he said. “The Defense Ministry currently has a big sack of money and a lot of people are trying to dump it […] They are not creating anything new – they’ll take the old, pass it off as new and take the money.”

And money – a lot of it – is something this project will take, said Nikitin, but added: “who counts money at a time of war?”

Bøhmer added that the cost of making the mobile nuclear reactors was just the beginning of the financial hemorrhage.

“Experience from the clean-up after the Soviet radioactive waste after the Cold War showed that the international community had to put tremendous effort into this clean up work,” he said.

“Our fear is that in the future the international community will once again have contribute to clean up for another round of unsustainable Russian nuclear projects,” said Bøhmer.