ST. PETERSBURG – Seaweed caused almost three days’ downtime at Unit 3 of Leningrad Nuclear Power Plant (LNPP), on the Gulf of Finland, near St. Petersburg, after a storm blew bay bottom sediments into the plant’s water intake structures, clogging the intakes that supply water to the unit’s cooling system. The blockage had to be manually removed before the reactor could resume operation.

Published on October 9, 2015 by Charles Digges 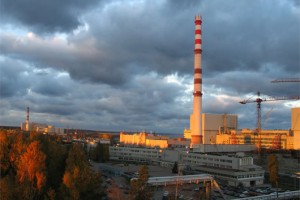 ST. PETERSBURG – Seaweed caused almost three days’ downtime at Unit 3 of Leningrad Nuclear Power Plant (LNPP), on the Gulf of Finland, near St. Petersburg, after a storm blew bay bottom sediments into the plant’s water intake structures, clogging the intakes that supply water to the unit’s cooling system. The blockage had to be manually removed before the reactor could resume operation.

A scram caused… by seaweed

The unit remained in unplanned shutdown from 2:03 a.m. of October 3 to 3:02 p.m. of October 5, LNPP’s Information and Public Relations Center reported.

“As of 9:00 a.m. (Moscow time) on October 6, Unit 3 is operating as usual at a capacity of 855 megawatts; bringing the unit to the rated [power] level is in progress,” said a statement published on October 6 on the LNPP page (in Russian) on the website of the Russian nuclear power plant operator, Rosenergoatom.

The unit could achieve rated capacity on the same day, but as of October 8, no information updates to that effect had been published on Rosenergoatom’s LNPP page.

Unit 3 was stopped at 2:02 a.m. on October 3 following a shutdown request, an earlier statement by the plant’s press service, of the same day, said: “A storm resulted in a rise in the water level in the Gulf of Finland and an increase in the amount of seaweed, which affected proper operation of LNPP’s water intake equipment.” 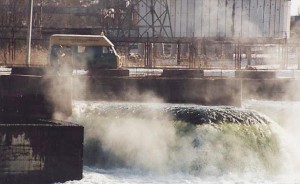 Leningrad Nuclear Power Plant, located in Sosnovy Bor on the southern shore of the Gulf of Finland, some 35 kilometers from St. Petersburg city limits, operates four reactors of the RBMK-1000 type, of Chernobyl infamy. The reactors were taken online in 1973, 1975, 1979, and 1981, respectively, and all four have been operating beyond their design-basis 30-year lifespans. Their efficiency factor is less than 30 percent, and over 70 percent of the heat produced by the reactors is waste heat, released with warmed water into the gulf.

Cold seawater at a rate of several hundred tons a second must be supplied to the plant’s units from a cooling reservoir, which for LNPP is the gulf’s Koporye Bay.

Rakes and other safety measures

Responding to Bellona’s questions on the causes of the unplanned shutdown, Rosenergoatom’s Information and Public Relations Department head Andrei Timonov said the plant’s shutdown request had been filed with the grid operator ahead of the shutdown, late on October 2, due to a storm warning issued by the emergency and disaster response service. “This is standard practice in these cases,” Timonov said in an email correspondence with Bellona.

Because LNPP’s water intake structures (second construction line) are used by both Units 3 and 4, one question that needed clarification was why it was only the intake equipment of the third unit that suffered seaweed clogging on October 3. 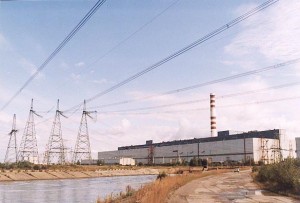 The plant’s water intake channel expands and opens into a reservoir – an intake chamber – from where water is acquired by the onshore pump stations, Timonov explained.

“This time, due to particular characteristics of wind, current, due to the reservoir structure, all seaweed was blown only to the mesh and filters of the pumps servicing the 5th engine ([to provide cooling for Turbine Generator 5] of the third unit,” Timonov said.

“The wind and current stirred up fine seaweed from the bottom, it passed through the traveling screens (which catch large reeds and weeds), and it was fine filters (with 3 millimeter mesh) that then stopped it, which, accordingly, got clogged.”

According to Timonov, the on-call maintenance staff of the turbine hall and the hydroengineering facilities cleared the filters and the traveling screens.

A turbogenerator’s cooling system is linked inextricably with that of a nuclear reactor, and a disruption or decrease in the cooling water supply threatens risks of a reactor meltdown or explosion. When risks to the water supply arise, the reactor must be stopped – which is what happened at LNPP’s Unit 3 on October 3.

“In cases like this, LNPP personnel urgently sets to clearing the [nets and filters] with rakes and other means at hand,” Oleg Bodrov, head of the Sosnovy Bor-based environmental NGO Green World (Zelyony Mir) commented on the incident on the organization’s website (in Russian).

Adverse weather, grass, seaweed, or ice are known to have caused emergency reactor shutdowns both in Russia and other countries. For instance, in January 2010, ice in the Delaware River forced shutdown at Unit 2 and power reduction at Unit 1 of the New Jersey-based Salem Nuclear Power Plant, which uses the river for water supply.

In fact, the owner of Unit 1 at the Salem plant had previously been fined for an incident involving water intake blockage. In 1994, the Nuclear Regulatory Commission levied a $500,000 fine for “violations stemming from an event on April 7, 1994, when marsh grass floating in the Delaware River blocked the traveling screens at the intake structure,” says an issue brief by the U.S. Union of Concerned Scientists.

The operators, who reduced the reactor power level, made a series of mistakes along the way and the reactor automatically shut down for safety reasons, the brief says. The 2007 brief, entitled Got Water?, explains the cooling water needs of nuclear power plants and cites numerous incidents where personnel’s violations or issues with maintaining proper water supply threatened a plant’s safety.

In August 2010 – when an unprecedented heat wave hit European Russia – raging wildfires were taking down high-voltage transmission lines around Novovoronezh Nuclear Power Plant, near Voronezh, and a malfunction in the plant’s outdoor switchgear, which was attributed to heat, brought on a turbogenerator shutdown and a reactor trip at Unit 3. In December that year, black ice and glaze ice conditions, as well as ice buildup tearing down power lines, led to power shutdowns and other utility interruptions in Dimitrovgrad, in Ulyanovsk Region, where one research reactor was scrammed and five more were taken offline preventively.

In more extravagant cases, a bird scrammed a reactor at Ukraine’s Rovno (Rivne) Nuclear Power Plant in April 2011, in June that year two reactors at Torness Nuclear Power Plant in Scotland were stopped by a swarm of jellyfish – a risk factor that has also affected operation of nuclear power plants in Japan and California, and that same month an Atlantic gray seal wandered into the water intake chamber of the Hinkley Point B station in Somerset in Great Britain and was trapped there for five days before staff managed to rescue and release it nearby.

Vulnerability to external factors is a known cause of nuclear energy’s unreliability. These risks make unplanned downtime a common occurrence at nuclear reactors. This time, on account of fine seaweed risen by a storm and clogging water intake structures, a 1,000-megawatt reactor stayed down for 61 hours and had to operate at a reduced power level after that. Some 70 million kilowatt-hours was undersupplied to the Russian Northwest’s grid as a result.

LNPP’s press service did, however, report in its October 6 statement on Rosenergoatom’s website that “the unit’s temporary shutdown did not affect [the plant’s] power supply to consumers.”