Dangerous radioactive remnants resulting from the 1971 explosion of the so-called Globus-1 device in an underground nuclear bunker in Russia’s Ivanovo Region, near Moscow, have been liquidated, according to RosRAO a state affiliated nuclear waste handler.

Published on October 13, 2015 by Charles Digges

A danger warning at the site of the Globus-1 underground nuclear detonation site (Photo:Chastnik.ru)

Dangerous radioactive remnants resulting from the 1971 explosion of the so-called Globus-1 device in an underground nuclear bunker in Russia’s Ivanovo Region, near Moscow, have been liquidated, according to RosRAO a state affiliated nuclear waste handler.

The explosion was a part of a peaceful use experiment, RosRAO said in its release, but the aftermath led to the site of the experiment becoming a radioactive hot spot, which threatened to contaminate the Volga River, the longest in Russia and Europe.

This hotspot had deviled Soviet and Russian nuclear scientists for decades as they advanced numerous plans to divert waterways and cover the site with cement, a la the Chernobyl Sarcophagus. All plans were rebuffed as prohibitively expensive.

The deep earth explosion of Globus-1 was a part of a seismological program for oil and gas exploration, the nuclear.ru Russian news portal reported, and was but one of many that were used for such purposes prior to 1989. 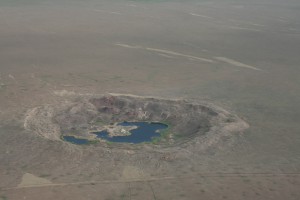 The Globus-1 device exploded with the force of 2.5 kilotons at a depth of 610 meters, but the results were disastrous.

The explosion released radiation into surrounding formations of clay, sand and immediately entered the atmosphere via cracks in the geology.

The Shacha River, a small tributary of the Volga, altered its location and threatened to flood the explosion site. This could have led to nuclear pollution of the entire Volga region.

Later, boreholes to the site of the explosion were drilled in 1976. These, too, became a conduit for leaking radiation which rose to the surface with upwelling water.

It was later revealed that the area surrounding the tunnel was covered with a layer contaminated subsoil.

Investigations oshowed that the radioactive isotopes cesium 137 and strontium 90 were present in water rising up the boreholes in quantities that exceeded norms for drinking water by 1000 times, said Yekaterina Ulitina, who headed up the cleanup project for RosRAO.

This leakage, she said, was responsible for the contamination of the surface soil.

According to RosRAO spokeswoman Irina Konstantinova, cleaning up the contamination took two years and was completed before schedule for a cost of 270 million rubles ($4.2 million).

Ulitina said RosRAO had liquidated all fuses for the nuclear device, and had also filled in research and observation boreholes into the underground detonation site. 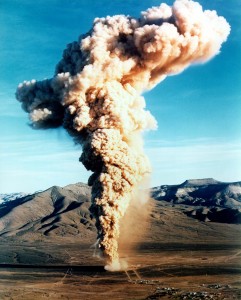 Study of above ground radiation releases from an underground nuclear test in Nevada in 1970. (Photo: National Nuclear Security Administration)

Some 400 cubic meters of contaminated soil were also excavated and cleared, she said, according to RosRAO.

The nuclear waste left over from the original explosion of the Globus-1 device remains buried at the 610-meter deep site.

But now that the boreholes have been plugged, said Ulitina, “the hydrodynamic tie is cut, so the waste is absolutely safe for those who are located on the surface.”

She said that the site would be inspected each year to monitor the stability of the plugging operations. No one living within 30 kilometers of Globus-1’s blast site was effected by the radioactive waste and soil removed by RosRAO, Ulitina said.

The Soviet Union carried out a total of 715 nuclear tests using a total of 969 devices between the years of 1949 and 1990, according to official data.

Of these, 124 were so-called peaceful use tests, such as the Globus-1 detonation. These detonations were analogous to the US’s Plowshare Program, which studied non-combat uses for nuclear detonations.

Numerous of the Soviet peaceful use explosions were, like Globus-1, conducted for geographical studies to locate oil deposits. Yet others were used to blow open cavernous underground storage points for natural gas.

Another small number of Soviet nuclear peaceful use detonations were used in canal construction. Others were used for researching possible migration of the radioactivity after nuclear explosions.

The peaceful use detonations ended with the adoption of a unilateral moratorium on nuclear weapons testing at Soviet sites in 1989.