Russia agrees to beef up notices to Norway about nuclear incidents

Published on September 11, 2015 by Charles Digges 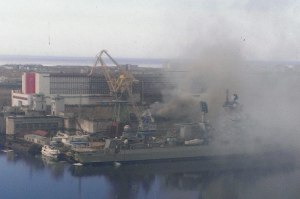 Smoke rising from the Zvezdochka shipyard as the fire on the Orel rages on. (Photo; Flashnord)

Amid escalating tensions between East as West, Norway and Russia will next week sign a long desired agreement to jointly notify one another of nuclear accidents, Norway’s Foreign Minister Børge Brende said.

Norway and Russia are expected to sign off on the notification procedures on September 15 at sideline meetings at a General Conference of the International Atomic Energy Agency in Vienna.

“The joint notification procedures confirm once again that cooperation between Norway and Russia in this field is helping to build trust and enhance security on both sides of the border,” he said.

The new joint notification procedures represent a fortification of an agreement the two countries signed in 1993 at a time of utter collapse of nuclear and radiation safety in the former Soviet Union.

The hazards – including nearly 200 rusted out nuclear submarines of Russia’s Northern Fleet, leaky spent nuclear fuel and radioactive waste storage facilities, as well as nuclear powered navigation beacons and lighthouses along Arctic coastlines – are close to being eradicated, thanks largely to US and Norwegian efforts to mobilize billion of dollars in international nuclear remediation funding.

But Norway has over the past years been put on edge by Russia’s lax fulfillment of its past promises to keep Oslo in the loop on nuclear dangers arising around the Murmansk Region where the Northern Nuclear Fleet is based.

According to Nils Bøhmer, Bellona’s executive director and nuclear physicist, it was clear the agreement was eroding following a series of dramatics fires that broke out on nuclear submarines between 2011 and 2015 at shipyards owned by Russia’s Unified Shipbuilding Corporation.

He singled out the December 2011 fire aboard the Yekaterinburg nuclear submarine while the vessel was in for short-term repairs at the Unified Shipbuilding Corporation-owned Roslyakovo Shipyard near Murmansk. The fire raged for 20 hours and injured nine.

“After the 2011 fire, Norway understood this to be an event it should have been informed about,” said Bøhmer. Because he story hit the media first, he said, ”an improvement to [the notification] agreement has been on the agenda for bilateral discussions.” 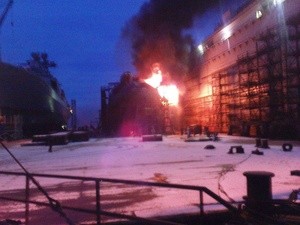 For instance, while Russian officials insisted the fire had been caused by faulty welding works that ignited a wood scaffolding, and in turn the sub’s rubber stealth hull, Bellona’s reporters revealed over the course of weeks that the official reports were misleading.

Bellona proved not only that the submarine’s nuclear weaponry was likely aboard during the fire, but that heavy oils in the submarine’s navigational system – not the stealth hull as officials had said – fueled the nearly day-long conflagration.

Finally, instead of the shipyard reporting the fire, civilians who noticed the plumes of smoke phoned it in to Russia’s Emergency Services Ministry.

Several fires on submarines under repair at Unified Shipbuilding Corporation shipyards have broken out in the ensuing years.

Most recently, in April 2015, the Orel nuclear submarine caught fire at the Zvezdochka shipyard in the Arkhangelsk Region. The fire was blamed on sloppy welding works.

A little more than a year earlier, in March 2014, the Krasnodar, which was undergoing repairs at the Nerpa Shipyard near Murmansk, was lit ablaze by maintenance efforts. Russian officials initially suggested the blaze had not been aboard the vessel at all – a version the media debunked.

Further afield, a fire tore through the Tomsk submarine in September 2013 at the United Shipbuilding Corporation’s Bolshoi Kamen shipyard near Vladivostok, injuring 15. 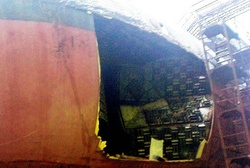 Like the Yekaterinburg blaze, it took several days for Russian officials to admit to details that had been published in the media. Official reports said no one had been injured, but reporters verified 15 had been taken to the hospital with breathing difficulties and burns.

One upside to the Tomsk incident was that it triggered a larger probe by Russia’s powerful Investigative Committee into safety practices at Unified Shipbuilding Corporation shipyards.

Bøhmer said he hoped the new agreement would make such fibs of omission by Russian authorities a thing of the past.

“If this new version of the agreement means that Russia will actually inform Norway about significant nuclear events with potential for radioactive releases, this is a very good step forward,” said Bøhmer.

“Both because early information about potential radioactive fallout will make it easier for Norway to take preventive measures,” he said, “but also because it’s a positive sign that Russia intends to maintain dialogue with Norway on nuclear issues, which is more and more important as international tension around the standoff between Russia and Ukraine grows.”