Ecologists are getting more uncomfortable with the fact that not just Russia is tinkering around with the science of extending the usual 30-year operational life span of nuclear reactors while the vast majority of the world’s fleet of 435 reactors is reaching an average age of 25. 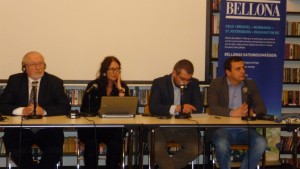 Ecologists are getting more uncomfortable with the fact that not just Russia is tinkering around with the science of extending the usual 30-year operational life span of nuclear reactors while the vast majority of the world’s fleet of 435 reactors is reaching an average age of 25.

The concern was raised during a joint conference of Bellona and Russian state nuclear corporation Rosatom in Oslo yesterday on “Russia’sAtomic Energy: Conditions, Tendencies and Safety.” The discussion focused on the safety of Russian reactors, especially those in Northwest Russia, closest to Norway, nuclear waste and spent nuclear fuel handling, and safety upgrades to nuclear installations.

Special discussions surrounded Norway’s ongoing nuclear and radiological safety cooperation with Russia, and how the public and NGOs must be included in the decisions making process on such issues. “Bellona has already been engaged in the problems of nuclear and radiological safety in Russia for 20 years,” said Nils Bøhmer, Bellona’s executive director and nuclear physicist in open remarks. “Russian and Norway have applied no small effort and spent a lot of money to increase safety of reactors, on issues of spent nuclear fuel and radioactive waste handling, and its storage.”

“Today we have to understand what kind of results we’ve achieve,” Bøhmer continued ”and what other difficulties and tasks we have ahead of us.”

Bøhmer underscored that in his opinion, civili society – battered, scorned and persecuted as it has been in Russia since Vladimir Putin resumed power – plays a very significant role in this process.

And, it was for this reason that the Oslo seminar made a point of hosting not only representatives of Rosatom and the Norwegian Radiation Protection Authority (NRPA), but representatives of Russian and Norwegian environmental organizations to participate in the debate and get some answers to their long standing questions.

Representatives of the Kola Nuclear Power Plant near Murmansk – the one of most concern to Norway – were the only invited Rosatom representatives who failed to participate in the conference.

Rosatom wishes by 2020 to build nine nuclear power stations, but the plans are dubious. The construction of the so-called Baltic Nuclear Power Plant in Kaliningrad by 2018 provoked a hail of questions. These are issues tied to Rosatom’s official roadmap for nuclear power plant construction

Currently, Russian operated 10 nuclear power stations for a total of 33 nuclear reactors, which supply 16 percent of the country’s electricity. Yet, 19 of these reactors are operating on state granted engineering life span extensions, and another four are operating beyond their engineered power parameters, or at more than 100 percent.

“This isn’t Russian ‘know how’ – many countries do this,” said Alexander Nikitin, chairman of the Environmental Rights Center (ERC) Bellona in St. Petersburg. “But Bellona is concerned by the fact that Russian atomic stations operate on excessive power output and extended reactors.” One nuclear power plant experimenting with running reactors beyond capacity is the Kola station, which is such a source of worry to Scandinavia.

In October, the Kola station was given the go ahead to continue running its 30-year-old No 4 reactor for an astonishing 25 more years – an unprecedented license extension in the industry. The extensions means not one of the plant’s reactors is not operating longer than it’s engineered design limit.

“Extending the resources of the Kola plant, as well as running its reactors beyond their power capacity, is associated with regional power demands, not just because the industry wants to do it,” said Sergei Zhavoronkin, secretary of Rosatom’s Public Chamber on Safe Nuclear Energy Usage in the Murmansk Region.

But, as Bellona Murmansk has noted many times, the region holds an energy surplus, to which the Kola nuclear plant contributed 60 percent of the energy, with the remaining 40 percent coming from hydroelectric stations. The energy literally has nowhere to go due to a lack of serious consumers. Nuclear power stations are yours, the waste is ours.

“It’s clear that international agreements are still not contracts, but they already contain certain prescribed requirements for the countries in question,” said Nikitin.

“All of these agreements that stipulate that Russia takes back the spent nuclear fuel [generated by these prospective] plants, which are built abroad,” said Nikitin. “No other country [that builds nuclear plants abroad] behaves this way aside from Russia.”

And all this on top of the spent nuclear fuel being returned via the Port of Murmansk from international research reactors built by the Soviet Union.

According to Zhavoronkin, 70 container of spent nuclear fuel from Russian-built foreign sources were safely offloaded and transported through Murmansk between 2008 and 2014.

Zhavoronkin called “rhetorical” the question of how safely these loads are actually delivered. In 2010, the vessel Puma, having offloaded spent nuclear fuel, nearly sank. And the vessels bringing these nuclear loads are not always rated to carry them.

Regarding the Puma Zhavoronkin said it was “good that the accident happened after and not before” the offloading.

“And that the Puma is an old ship is a rhetorical issue,” Zhavoronkin said.

What should become of spent nuclear fuel?

“Spent nuclear fuel is a big problem for all nuclear countries,” said Nikitin. “No one knows in the world knows what to do with it, including Russia.”