On the eve of the 28th anniversary of the Chernobyl catastrophe Bellona’s Liya Vandysheva spoke with physicist, D.Sc. in Biol. Vladimir Levchenko, who went to work in the exclusion zone a year after the April 26, 1986 explosion blew to pieces the plant’s fourth reactor, spelling the worst technological disaster of the 20th century. 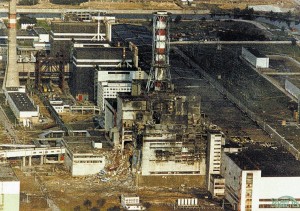 ST. PETERSBURG—On the eve of the 28th anniversary of the Chernobyl catastrophe Bellona’s Liya Vandysheva spoke with physicist, D.Sc. in Biol. Vladimir Levchenko, who went to work in the exclusion zone a year after the April 26, 1986 explosion blew to pieces the plant’s fourth reactor, spelling the worst technological disaster of the 20th century.

In the spring of 1987, Levchenko – then a young physicist, now Doctor of Biology at the Sechenov Institute of Evolutionary Physiology and Biochemistry of the Russian Academy of Sciences – went to the area of the Chernobyl accident as part of an expedition gathered by the Kiev-based I.I. Schmalhausen Institute of Zoology to study the accident’s impact on living beings. On the eve of April 26, which marks the 28th anniversary of the disaster, Levchenko, who also heads the Information Network Ecological Northwest Line (ENWL) at the St. Petersburg-based Environmental Rights Center Bellona, shared his memories of his work and the conditions in the contaminated territory around the destroyed station, and spoke about what must be done to prevent the tragedy from ever striking again.

– Vladimir Fyodorovich, how did it come together that you went to Chernobyl?

– I was just moving from physicist to biologist. As an astrophysicist, I had started getting articles published in biology journals jointly with D.Sc. [Yaroslav] Starobogatov. At that time, an expedition was being organized into the Chernobyl zone, led by Academician Leonid Frantsevich (he was not yet an academician then, but simply a doctor of sciences in biology) from the Kiev Institute of Zoology. D.Sc. [Vladislav] Khlebovich, who participated in the expedition from St. Petersburg, suggested to me: “We’re all biologists here, and you’re a physicist. If we had at least one physicist in our group…” After taking a bit of time to think, I agreed. It was interesting, after all… The plan was only to go for two weeks.

– Did you and your colleagues understand what you were dealing with, that it was dangerous there, that there was radiation there? Did you comprehend the scope of the disaster?

– I happened to land there during the most dangerous time – the first two years after the explosion, but I was not scared. Since my third year [of university] I had been working as a shift engineer at a [particle accelerator,] cyclotron, had written my thesis working with another, at the [Ioffe] Physical Technical Institute in [what was then] Leningrad. I felt no fear whatsoever of radiation – just like an electrician is not afraid of wires… Plus which, I had equipment. That said, I did, of course, have an idea of the scale of it. We never approached the reactor closer than 200 meters, would only see its ruins, which looked like a battle zone. True, many of those who were members of our group died later, but it’s been since then a quarter of a century after all…

– So how did you come out safe on the other end?

– There is this effect – typical for Chernobyl liquidators – deterioration of vision. I developed it, Khlebovich did, too – as a result of time spent in an area with increased radiation levels. Joint disease is also quite typical. All in all, though, I was just lucky. Or it could be that I had also simply become accustomed a little to radiation in my previous jobs. The worst in an accident zone is not the level of radiation itself, but that the explosion blew out an enormous amount of fine radioactive particles that was spread around by wind as dust. If you take measurements with your equipment, oftentimes it’s not quite clear where the radiation comes from. Sometimes it’s just one speck of dust lying somewhere around. If you breathe it in by accident or swallow it when eating, cancer is a certainty.

– Did you use any means of protection?

– We were given thick-soled army-issue boots, as well as [safety] masks, respirators, but we almost never used them. Soldiers posted at checkpoints in the accident zone were supposed to be wearing masks, but very few did – it was hot. – Do you think Russia could be doing more for the Chernobyl liquidators?

– The benefits were introduced in the second or third year after the accident. One could just about get free housing from the state, but in practice, not many managed to. I was entitled to early retirement, ten years before retirement age, though I didn’t use that. I am now paid an extra of about [$55.66] to my pension, very little in this day and age. If we’re talking about those who went inside the reactor, none of them are alive today… Of course, what the state provides is little. All [of us] have impaired health. It should have been done before – and it should have been more, at the time when people were in their active age. They are now in their 60s and 70s…

– What were you doing in the contaminated area?

– The expedition was studying what had happened and how it was affecting the living organisms within the 30-kilometer radius from ground zero. My job, specifically – and I was this sort of Tarkovsky’s Stalker – was to identify, using special equipment, spots where it was most dangerous to be. Other members of the group collected biological samples for visual and laboratory examinations. Every day we would go to different places – from the point nearest to the reactor – and to the border of the zone, where we lived (a village called Strakholesye).

– Life in Pripyat must have frozen still, no?

– As wildlife goes, on the surface, the season was in full swing – hares running around, turtles crawling, mushrooms were growing (radioactive mushrooms, I should say). However, the pines near the exploded reactor had shed their needles, and the birch trees showed deformed, huge, often chlorotic leaves. The locals there were warned: “If you want to live – move someplace else.” But quite many refused to. Older people would say: “Our home is here, our garden, our trees. We’re not going anywhere from here.” There were young people, too – we even came upon a wedding once. – What do you think was the cause of the catastrophe?

– Any large site, even a hydropower plant, where an enormous amount of energy is concentrated, is always potentially dangerous. The scale of accidental events can be cyclopean: The Sayano-Shushenskaya Dam is a good example. Specifically to Chernobyl, though, the explosion occurred as a result of an intentional violation of the reactor’s operating mode, which was undertaken in order to study the possibility of a [nuclear] power plant operating more efficiently at low capacities.

– So the explosion was not even an accident?

– At the very least, procedure should have been followed very closely, and the design engineers trusted – alright, maybe not blindly, but the station had been working many years without an incident before that, hadn’t it. There shouldn’t have been any experiments at a potentially dangerous site trying to improve it. And if it was needed so badly, then it shouldn’t have been done at the site itself, but in laboratory conditions and on a different scale. – Today, one could go to Chernobyl on a tour – is this absolutely safe?

– It’s safe enough, though radiation levels are somewhat increased. Those processes are still going on, though they are not being studied much. Radiation detectors are installed in a number of places. It shouldn’t blow up again. By the way, two years ago, [St. Petersburg- based] Bellona went to Pripyat, led by [the center’s] director Nikolai Rybakov.

– What would help prevent such tragedies in the future?

– It would be advisable to avoid building nuclear power plants. I believe mankind does not require so much energy. Three thirds of it is wasted anyway, lost to heating up the planet instead. It’s the same with thermal power plants, by the way – their efficiency factor is around 30%. Humankind’s development path should be in optimizing energy production and energy use, in transitioning to local renewable energy sources (such as wind power stations) of relatively small capacity. And for that we need new technologies, for which, in turn, we need new knowledge. Here’s a great example: When I was a schoolboy, a radio set needed 200-300 watts to work; today, a radio receiver of the same class consumes just 0.5 watts – that is, power consumption has changed 1,000 times to produce the same result. It’s as if new knowledge and, by extension, the new technology has replaced that energy.