MURMANSK – Two years after the derelict nuclear service ship Lepse was hauled out of Murmansk harbor – only to endure further traffic jams and bureaucratic snarls at the naval shipyard Nerpa – the radioactive junkyard will finally go into dry dock on May 30 – the first major step in its dismantlement since it left this northern city. 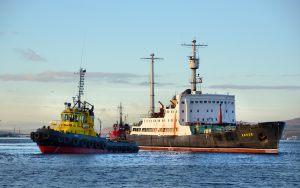 MURMANSK – Two years after the derelict nuclear service ship Lepse was hauled out of Murmansk harbor – only to endure further traffic jams and bureaucratic snarls at the naval shipyard Nerpa – the radioactive junkyard will finally go into dry dock on May 30 – the first major step in its dismantlement since it left this northern city.

It’s scheduled to enter its specialized floating dock facility on May 20, from where it will 10 days later be moved to the land-based slipway at Nerpa.

Getting the ship out of water and into its dry dock dismantlement point will mark a significant milestone in reducing the overall radioactive threat posed by the vessel.

The news was announced today at the third annual joint workshop hosted by Bellona and Russian state nuclear corporation Rosatom by Ken Mizen, of Nuvia Ltd, UK, the nuclear engineering agency contracted to safely carry out taking the vessel apart in cooperation with the Nerpa shipyard.

The announcement took place at the workshop, entitled “Results of International Cooperation and Enhancing Nuclear and Radiation Safety In the Russian Northwest” against a background of various tallies and evaluations of other nuclear remediation projects in progress in the Murmansk area. One of the most pressing of these has, since 1988, been the disposition of the Lepse nuclear service vessel.

“It is very good news that the day of the workshop has brought us one step closer to complete dismantlement of the Lepse,” said Nils Bøhmer, Bellona’s General Director, nuclear physicist, and one of the workshop’s key speakers.

“We will hope that such future workshops will continue to bring good news about Russia, Bellona and the international community cooperating to finally lay the Lepse to rest,” he said.

The Lepse has been laid up at Nerpa, a naval shipyard equipped to handle the ship’s dangerous nuclear cargo some 20 kilometers up Kola Bay from Murmansk, since September 2012, when it was escorted out of the city with no small amount of relief.

But that’s nothing compared to the 24 years it spent bobbing at dockside four kilometers north of central Murmansk and its population of 300,000 at the Atomflot nuclear icebreaker port since its decommissioning in 1988.

The boat was finally towed away from the most populous city above the Arctic Circle in September 2012, after more than a decade of strenuous negotiations among Bellona, the Russian government and financial institutions – most notably the European Bank of Reconstruction and Development – to back its disposal.

The long-brewing dismantlement push, however, ran aground when the Lepse finally reached Nerpa, only to find that the historic Leninsky Komsomol, Russia’s first nuclear submarine, was occupying the dry dock meant to house the nuclear service vessel during its tedious dismantlement process. An apparent miscommunication between Rosatom, which is legally responsible for dispensing with the Lepse, and the Russian Ministry of Defense steered the nuclear hazard into a gridlock: Some quarters of the defense ministry wished to preserve the Leninsky Komsomol as a museum piece.

On Thursday in Murmansk, Mizen announced that contracts had finally been signed to move the Lepse from Nerpa’s No 6 pier to wharf No 1, from where it will be lifted onto the shipyard’s PD 40 dry dock.

At wharf No 1, Mizen said, the upper portions of the ship and its larger infrastructure are being be removed as part of the stepwise contractual obligations Nuvia Ltd is following.

Wharf No 1 has been outfitted with a panoply technologies, some of them never used before, to begin this process. Discarding these large parts of the Lepse’s infrastructure, Mizen explained, will reduce the ship’s weight and dimensions, making the move from water to dry dock easier.

Once in dry dock, the ship can carefully be sawed into sections to isolate the fore and aft sections, which are those that are packed with spent nuclear fuel. These, said Mizen, will be treated as so-called Large Storage Packages, or LSPs.

The LSPs will be packed and temporarily stored on the Nerpa slipway at PD 40.The LSPs are already being fabricated.

Once they are ready to be moved, they will be loaded aboard the Serebyanka, a special transport ship that will berth at wharf No 1. The Serebyanka will then haul the LSPs to Atomflot, from were they will be shipped by rail to Mayak, currently Russia’s only spent nuclear fuel reprocessing facility, in the southern Urals.

Mizen told the workshop that certain repairs are slated for wharf No 1 to accommodate the Serebyanka transport ship, and a tender for this work is currently underway. The containment shelter for the Lepse under construction. (Photo: Nuvia Ltd UK).

Additionally, several roadways to Nerpa will need repairs to accommodate transporting construction equipment for a large containment shelter that will enclose the PD 40 dry dock where the Lepse will be dismantled. The area where the shelter will be located is currently undergoing geological and engineering surveys that are expected to yield positive results by May.

The shelter will then be examined by independent experts who are currently being considered in a tender.

Mizen added that the close cooperation between Atomflot and the Nerpa shipyard have helped advance the project.

Although Mizen did not forward a finishing date for the entire dismantlement project to be completed, Bellona Murmansk’s director Andrei Zolotkov cited earlier projections that the Lepse would be no more by 2017.