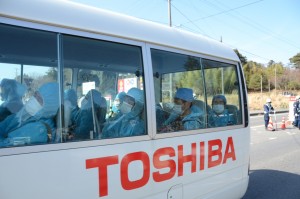 The accident highlights a recent spate of investigations by international media on worker safety at the Fukushima plant that have documented that it is low, with many unskilled workers recruited from among Japan’s growing homeless population, who are paid poorly, doing jobs at the radioactive site they are not nearly qualified for.

These workers are recruited mainly by Tepco subcontractors with shady ties to organized crime, reports have said.

Tepco said Friday’s death of a worker in his 50s who has remained unnamed, was the first time a laborer had died as a direct result of an accident inside the plant since the nuclear disaster in March 11, 2011.

A tsunami and earthquake struck the plant 220 kilometers northeast of Tokyo, and triggered a triple reactor meltdown that forced more than 160,000 residents of the Fukushima prefecture to flee food, water and air contamination. Barely any of these who left have been able to return home.

“In the three years since the disaster, we had not had any worker deaths caused by work (inside the plant). The fact that such a serious accident has occurred is deeply regrettable,” Tepco spokesman Masayuki Ono told the Reuters news agency.

When the accident occurred on Friday afternoon, the man was checking the foundation of a building, digging around the edge of the concrete structure, Ono said, according to Sky News. The site where a worker died after being buried under gravel while digging a ditch at Fukushima Daiichi (Photo: Tepco)

“When he was checking underneath the foundation, a mass of concrete collapsed along with the earth around it and fell on him,”spokesman Ono said.

The worker was confirmed dead later Friday in a hospital near the plant, reports indicated.

Japan’s Kyodo newswire said that Tepco has suspended cleanup operations and launched safety inspections. The newswire also drew attention to the fact that most workers at the plant are contract laborers who are hired through mutli-layered construction company schemes.

A Reuters investigation published in December found widespread labor abuses, where workers said their pay was skimmed and there was little oversight over working conditions inside the plant.

The report documented the arrests of gangsters who had infiltrated the Obayashi Corps network of decontamination subcontractors and who were illegally sending workers to the government-funded cleanup project.

In a case revealed in October, homeless men were rounded up and put to work clearing radioactive soil and debris in Fukushima City for far less than government minimum wage, police accounts indicated. The men, Reuters revealed,  reported up through a chain of three other companies to Obayashi, Japan’s second-largest construction company.

Obayashi, one of more than 20 major contractors involved in government-funded radiation removal projects, has not been accused of any wrongdoing. But the spate of arrests has shown that members of Japan’s three largest criminal syndicates have set up black-market recruiting agencies under Obayashi.

Problems in pinning down the origins in corruption and faulty hiring practices of unskilled, exploitable workers lies in the sheer number of subcontractors engaged by Tepco to bring the ongoing disaster to heel.

Tepco has repeatedly refused to say how many subcontractors are working under its supervision. Partial contract terms released by the Japanese Ministry of the environment under Japan’s information disclosure law in August show that the ministry employees 733 different subcontractors to perform decontamination in in the 10 most contaminated towns in the Fukushima prefecture, Reuters said.

Five firms working for the Japanese Ministry of the Environment could not even be identified, said the report, as none of them had construction ministry registration, listed phone number or websites or any registration showing who owned them. Tepco has been widely criticized for its handling of the cleanup. The operator was plagued by a series of leaks of radioactive water from hastily built tanks at the site last year and it has repeatedly promised to improve working conditions.

Earlier on Friday, Tepco said work to remove fuel rods from the destroyed No 4 reactor buildings had been halted after a worker had mishandled a giant crane, the first major delay in an operation to remove 1,533 fuel rod assemblies.

The worker started moving a crane used to lift the fuel assemblies on Wednesday without disengaging the handbrake, Tepco said.