Lithuania’s Social Democrat party leader Algirdas Butkevicius, riding the victory of his party at polls last months Parliamentary elections – which hosted a parallel non-binding referendum where Lithuanians crushingly opposed plans for a nuclear power plant project – announced last week he would make sure the plant would not go forward.

Published on November 20, 2012 by Bellona, translated by Charles Digges 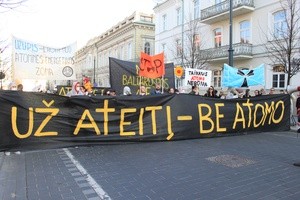 The victory of Butkevicius’s party in the October 14 Parliamentary, or Seimas, elections – and the popular, but non-binding defeat of the Visaginas NPP – emboldened the party leader to make that loss binding and legal, and he announced to Lithuanian media that the plant, to be built by Hitachi Europe, will not go forward.

“The people expressed their viewpoint at the referendum, and I will carry out their wishes,” said Butkevicius in an interview with the Lithuanian 15min.lt news portal. “Seimas must draw up a bill as soon as possible so that the plan to build the nuclear power plant is ruled null and void, and we will support it.”

The sweeping victory of a coalition of the Social Democrats, the Labor Party and the Order and Justice Party has positioned Butkevicius to become the next prime minister once President Dalia Grybauskaite has finalized a coalition

The referendum on the Visaginas NPP, held in tandem with the parliamentary elections, and which was proposed by the Social Democrats, showed 65 percent of Lithuanian voters were against the building of the plant.

Butkevicius’s declarations that the plant project will be cancelled have not gone unopposed at high political levels.

Russia is constructing the twin VVER-1200 Baltic project in Kaliningrad, an exclave of the Russian Federation that sits between the EU states of Poland and Lithuania. The plant is expected to export most of the electricity it generates.

According to Kubilius, “It’s our money, the population’s money, the money our customers will pay for importing electricity that will be used [by Russia] to construct the nuclear power plant in Kaliningrad. It is no surprise that the Russians are happy about it. But I do not see any reason for us to be happy.”

European Union Energy Commissioner Günther Oettinger – who represents a body that doesn’t warmly endorse nuclear power – backed Kubilius, telling the Baltic News Agency that if Lithuania failed to build the plant, problems with energy supply security will persist throughout the region, including the Baltic countries, Finland and the Russian enclave of Kaliningrad.

Despite the dire warnings, however, Lithuanian voters were not convinced when they went to the polls in October.

After weathering what many noted was a dishonest, fervent propaganda campaign in favor of the plant mounted by the center-right government, topped off by attacks against environmentalists accusing them of being ‘enemies of national security,” voters were simply turned off to more muted arguments in favor of Lithuanian energy independence – a plan Butkevicius still hopes to make good on with a regional LNG terminal project he would undertake with Estonia and Latvia.

Other missteps – which were totally avoidable – also conspired to doom the plant to failure, not the least of which was the center-right government’s inability to find a principle investor for the plant, and through a period of several years, no corporation the country approached was at all interested in helping Vilnius realize its nuclear plans – which it hoped to do by 2020.

The Fukushima disaster of March 2011, which idled almost all of Japanese corporation Hitachi’s reactor plans, finally brought the needed investor in the Visaginas project. The proposal – the only one on the table – was to construct Hitachi’s new ABWR, 1350 megawatt reactor.

Environmentalists from Lithuania, Belarus, Russia and a host of European countries pounced on the plans immediately with a laundry list of serious problems – the most serious of which was disinformation about the plant’s potential impact on the environment and health of the population, and the failure of the government to include its public in making the decision over whether to build the plant at all.

This posed a violation of the Aarhus Convention, which guarantees the public specifically that right. Obligatory consideration of comments made on the Environmental Impact Study by Lithuanian, Russian and other European environmental groups also went ignored as the government on April 29, 2009, decided to go ahead with the plant. Lithuania also blatantly ignored Belarusian concerns against the plant expressed under the Espoo Convention, which provides for neighbors of a country engaged in a potentially environmentally dangerous project to object to its completion.

Lithuania’s government also ignored the economics of the plant when it, behind closed doors, signed Hitachi on as the principle investor in a deal that placed all construction liabilities on the Lithuanian people, who would own only 38 percent of the plant.

A group of Seima deputies formed a committee to examine the technical and economic aspects of Visaginas. After these talks collapsed, the government ramrodded through legislation earlier this year approving the plant.  All the while, the government ignored the glaring absence in the Environmental Impact Study of required detailed plans to deal with a potential nuclear emergency at the station.

As irregularities driven by the center-right government piled up, opponents of the project, in an extra-parliamentary session of the Seima, overwhelmingly approved the non-binding referendum to be held in conjunction with the parliamentary elections.

In September, the pro-nuclear Lithuanian government – borrowing a tactic from its totalitarian neighbor Belarus – slapped a persona non grata label on the passports of several noted Belarusian anti-nuclear activists, including Bellona contributor Tatyana Novikova, who had been officially invited to the Seima to speak about their opposition to Visagias.

The story received broad coverage throughout Europe, and torpedoed Lithuania’s reputation as a democratic state. The supposed energy independence that would come with the dangerous nuclear station was obviously coming at too high a price to the country’s ideals as a free nation.

As the Visaginas NPP project unraveled, the center-rights accused their Social-Democrat opponents of abandoning their previous pro nuclear stance. Indeed, between 2004 and 2008 the Social-Democrats had done much to promote Visaginas, attracting capital and founding an energy company, Leo Lt – which was liquidated when the center-rights took power.

After Fukshima, the Social-Democrats, like many around the world, reversed their position on nuclear energy, undertaking in the process a number of activist measures against its spread.

In the past years, the democratic world has seen increasing success by environmental organizations to awaken the public and give it proper information about the dangers of nuclear energy – and Lithuania is a case in point. A small glance at how this was accomplished is worth a look.

In 2008, Russia Ecodefense, Lithuania’s Atgaiya and Greenpeace began to mount vigorous criticism of Visaginas. Using the courts, they demanded that the lawful manner in which decisions on building nuclear power plants be restored.

On April 26, 2010, Atgaiya, Belarus’s Ekodom, the Belarusian Anti-Nuclear Campaign, the Green Parties of Lithuania and Belarus, Ecodefense, and other organizations began their “For a Nuclear Free Region” campaign, demanding that their own governments refrain from building Visaginas, the Belarus NPP and the Baltic NPP. Instead, they demanded a non-nuclear energy path.

By September 2011, politicians and nonprofits from three countries had joined the campaign, and held an international conference in Vilnius on the problems of nuclear energy – which included a sharp discussion on the safety and economic feasibility of the Visaginas plant.

Since the beginning of 2012, before the Lithuanian referendum was even announced, the environmental groups and likeminded politicians fought and exposed the machinations of the nuclear lobby and posed their governments uncomfortable questions.

This victory was not an easy win by environmentalists, and they must remain on the offensive.  But it is now clear that the closure of the Visaginas project is a direct result of uniting rather than fracturing Lithuanian society, which will only fortify the country’s economic and energy security.