Published on September 5, 2012 by Charles Digges 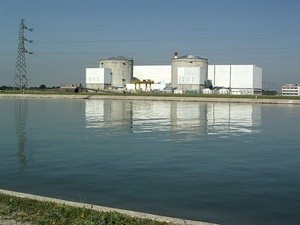 No radiation escaped and both workers were performing routine maintenance, she said.

Although initially reported as a fire, the event at Fessenheim is now understood to have resulted from a chemical reaction when hydrogen peroxide reacted with water in a reservoir, leading to a release of “oxygenated stream,” the EDF spokeswoman said.

EDF said the escape had triggered the fire alarms but first reports of a blaze were unfounded.

“No fire broke out. During a maintenance operation steam escaped which set off the fire alarm,” said the spokeswoman.

The fire service told Agence France Presse that about 50 firefighters had been deployed.

The power station, which has the oldest nuclear reactors in France, has been the target of regular anti-nuclear protests. Fessenhiem opened in 1977 and is provisionally scheduled for shut down in 2017, Sky News reported.

“Accidents do happen, and the conditions for accidents increase as nuclear power plants get older,” he said. “My advice to the French would be to keep up with maintenance and not to skimp on the costs because the plant is expected to close in five years.”

Fessenheim has been a lighting-rod of controversy largely due to its location, which makes it vulnerable to seismic activity and flooding.

It operates two pressurized water reactors with a power output of 880 MWe each, said the London-based World Nuclear Agency. Close to Frances border with Germany and Switzerland, it draws its cooling water from the Rhine.

France relies on nuclear power for some 80 percent of its energy needs – a figure France’s new president Francois Hollande, a strong supporter of renewable energy, has promised to reduce to 50 percent by 2025.

This should come as something of a relief to France’s population, which elected Hollande based largely on his less agressive approach to using nuclear energy, which resonated well in the post-Fukushima era.

Meanwhile France’s nuclear power plants are fast approaching the end of their 30-year engineered lifespans, giving rise to the possibility of more incidents.

Almost exactly one year ago, on September 11, 2011, an explosion rocked the French nuclear facility of Marcoule near Nimes which killed one person and injured four others, one seriously.

No radioactivity was released in the incident.

The blast was caused by a fire near a furnace in the Centraco radioactive waste storage site, located on the premises of Marcoule.

EDF, the plant’s owner, said it at the time it had been “an industrial accident, not a nuclear accident.”

The Centraco treatment centre, which has been operational since February of 1999, belongs to a subsidiary of EDF. It produces MOX fuel, which recycles plutonium from nuclear weapons.