Almost half of Lithuanians will likely vote against the construction of the planned Visaginas nuclear power plant (NPP) in a referendum in October, according to a survey by Prime Consulting for the Lithuanian magazine Veidas.

Published on August 8, 2012 by Charles Digges 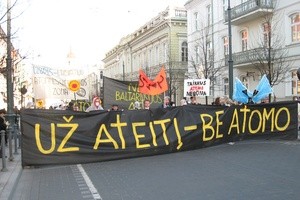 Forty eight percent of Lithuanians may vote against the nuclear plant in Visaginas, while 19 percent support the construction, Veidas said.

The poll, conducted in the country’s largest cities among 500 people on July 16-17, didn’t provide a margin of error.

Lithuania will hold the referendum on October 14 along with the general election in which the ruling center-right coalition is widely expected to be ousted from office, the Bloomberg news agency reported.

Andrei Ozharovsky, a nuclear physicist and industry expert with Bellona in Russia pointed out that previous polls had indicated a 65 percent public opposition to the plant.

“It is important for the government to listen to public concern over the building of the reactor because this plant will be there for decades to come,” said Nils Bøhmer, Bellona’s general director and nuclear physicist.

“Fukushima showed that it is of vital importance to have  strong independent regulators who can question the plant’s operators as well as the contractors building it,” he said.

The figures from the polls suggest that Hitachi, the strategic investor on the Visaginas plant, may have a dark cloud cast over its plans to enter the construction phase: With the referendum coinciding with the general election, turn out is expected to be robust.

But a statement released to Bellona by Hitachi in the European Union remained optimistic in an email interview with Bellona that the polls do not reflect Lithuanian public opinion.

“Hitachi is looking forward to continue its discussions with the Regional Partners and make our technology available to the region,” the statement added.

A 50 percent plus one vote against the plant with a 50 percent voter turn out will be required to scuttle the plant, said Ozharovsky.

The country’s lawmakers approved the July referendum proposal despite Prime Minister Andrius Kubilius calling for parliament to reject the initiative because it is “not necessary.”

Lithuanian President Dalia Grybauskaite said the referendum would be “another opportunity and obligation for the government to better introduce the public to this project.”

In June, Lithuanian parliament approved an agreement which provides the contractual framework for Visaginas.

The government had planned to sign an agreement with strategic investor Hitachi to proceed with engineering and preparation work.

“At this stage Hitachi wants to set up the project company as soon as possible and we expect this can be done before the referendum,” Hitachi’s statement to Bellona said.

A final investment decision on whether or not to go ahead with the project is expected in 2015, NucNet reported, and the plant would be operational by 2020-2022.

Hitachi would own 20 percent of shares in the Visaginas unit and Lithuania would hold 38 percent. Latvia and Estonia would take stakes of 20 percent and 22 percent respectively, according to NucNet.

Estonia, according to data published in Delfi news agency, is far less supportive of nuclear energy than Lithuania, with polls indicating only 27 percent of the country’s citizens support nuclear power.

Riga, in Latvia, is also expressing reservations, saying it needs more details before committing to the project.

Prime Consulting’s poll suggest that Lithuania’s Social Democrats – who originally called for the vote on Visaginas complaining that details on the project remain too scarce after earlier supporting the plan to build the plant – are most likely to lead the next government, Business News Europe reported.

The Visaginas plant has been a lighting rod of controversy ever since its blueprints were drawn up.

There is an environmental and technological underpinning to this: Hitachi-GE plans to run the plant with its ABWR reactor, which has in the past had documented turbine problems.

In October last year, Japan’s Hamaoka NPP successfully sued Hitachi for $117 million in lost profit and damages for eight months worth of downtime repairing it’s defective reactor No 5’s turbine system. Despite this, Hitachi still promotes the reactor for export use.

Visaginas is also failing to find a niche in a small region where two other nuclear power plants are planned –Belarusian NPP in the city of Ostrovets, and Baltic NPP, to be built in the Russian enclave of Kaliningrad, wedged between the Baltic state and mainland Russia.

This is could ramp up yet more political tit for tat between Vilnius and Minsk: Lithuania has been vociferously opposed to Belarus NPP on the grounds that Minsk has submitted insufficient proof that its plant will be safe.

Vilnius has invoked the Espoo Convention, which requires a country building an industrial installation that could have deleterious trans-border affects to review project documentation and hold hearings with its neighboring states.

The Espoo Convention’s Implementation Committee said in early 2011 that Belarus had committed an infraction of the convention by breaking ground on the plant. But that has not stopped further construction.

Environmentalists have called this proliferation of plants across the small contiguous states dangerous, and other observers have emphasized that it is just plain bad economics.

Indeed, a tender held for Visaginas NPP in January 2011 received no bidders. Poland’s Polska Grupa Energetyczna (PGE), who had initially been one possible source of investment for Visaginas, backed off in December last year.

BNE reports, however, that Poland may again be warming to the project – something that casts uncertainty over the final break down of shares that Hitachi and its Baltic parntners would own in the plant.

Yet even Baltic and Belarus NPPs ­– which both are being financed by Russian state nuclear corporation Rostom’s international construction wing, Atomstroyexport ­– are having trouble finding potential buyers for their perceived output.

Simultaneous to its announcement that it was not interested in funding Visaginas, PGE also broke off negotiations with the Russian power trading company Inter RAO UES over buying power from Baltic NPP.