MOSCOW – A few days ago a sensational – and erroneous – piece of news spread in the media: On account of this winter’s unprecedented cold snap, Germany has ostensibly re-launched several of the nuclear reactors it shut down last year in the wake of the terrible catastrophe at Japan’s Fukushima. The misreporting aside, the story did serve to highlight another falsehood – that nuclear power is the best bet against the world’s new plague, the extreme spells of cold and heat brought on by climate change.

Published on February 13, 2012 by Vladimir Slivyak, translated by Maria Kaminskaya 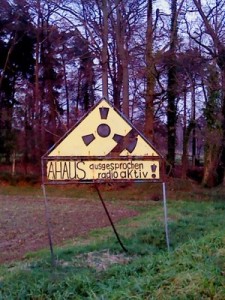 The story about Germany poised to scramble what power resources it has in reserve should it need them to withstand this season’s deep freeze – especially in Southern Germany – first appeared in the German Handelsblatt (in German) and was quickly picked up by a number of European media, including the venerable Agency France Presse and a range of Russian papers. A brief report carried by the Russian radio station Ekho Moskvy (in Russian) said, for instance, that Germany’s move to take several nuclear reactors back online was a precautionary measure necessitated, among other reasons, by the unusually low temperatures that have been holding in the country since early February.

From the start, something was decidedly off-key with this information: The media said, in part, that the decision was made by Germany’s grid operators, even though an issue like that would be entirely under the purview of the federal government. Furthermore, as Jan Haverkamp, Greenpeace’s expert consultant on nuclear energy, points out, the eight nuclear power plants that Germany closed after Fukushima no longer have licenses and cannot legally go back into operation, or, for that matter, into reserve.

So they have not – and the news was wide of the mark. Someone somewhere got their news wires crossed and, in what was apparently a product of misinterpretation gone viral, Germany’s grid operators did not in fact plug any of the idle nuclear reactors back into the grid. Instead, oil and coal power capacities in cold shutdown were requested for stand-by in case increases in demand or other circumstances required engaging them so as to compensate for a potential shortage. One coal-fired station in Austria was brought into stand-by as well.

In South Germany, Handlesblatt wrote, the situation might prove especially tense since five of the eight shut-down nuclear power plants that used to provide their share of power to consumers are located there, and demand is high – a factor that, while it may or may not affect the supply situation, has more than likely contributed to the resulting media confusion. At any rate, the closed nuclear reactors remain closed and, according to Haverkamp, who has looked into the controversy, Germany has yet even to put the requested coal and oil capacities into actual use.

In a statement quoted in the Russian publication Vzglyad (in Russian) last Friday, Germany’s Chancellor Angela Markel said in fact “power supply in Germany remains stable” and that “consumers need not worry about” any risk of a blackout caused by an increased burden on the energy producing capacities.

Merkel also said more strenuous efforts were needed to spur the transition toward renewable energy sources, the report said. In other words, no change in Germany’s policy of moving unswervingly toward a complete nuclear phase-out has been contemplated. None of the Russian media have so far deemed it necessary to publish a correction.

The paradox, meanwhile, is that while Germany is faring quite alright without its shut-down nuclear capacities, energy supply problems caused by this extraordinary temperature plunge hit elsewhere in Europe – namely, France, one of the world’s countries most prominently dependent on the “peaceful atom.” France relies on nuclear reactors for as much as 80 percent of all domestic power production, and adding to the cold irony is the fact that it is the pro-nuclear France that has suddenly found itself unable to meet the increased demand for electricity – and it is the now determinedly anti-nuclear Germany that is exporting power to its neighbor to help cover the shortage.

France’s problems stemmed from the widespread use of electric heaters consumers turn on in their homes during particularly cold seasons; with the onset of this recent cold snap, demand rose dramatically. Interestingly, last year, when Germany, sobered by the Fukushima disaster, made the decision to shut down a third of its nuclear reactors in one fell swoop, the world’s most authoritative and well-paid experts rushed in with ominous prophecies of an impending energy doom Germany – not France – would be in for this winter.

The Russian nuclear corporation Rosatom, too, wasted no time chucking in its two cents’ worth of energy wisdom, putting its PR jockeys hard at work to instill in the Russian public a due sentiment of schadenfreude: Silly Germans, they warned from TV screens, would yet be kicking themselves for that foolhardy whim, choosing wind converters over the good old dependable nuclear reactors.

Moved by that same unabashed compassion, apparently, nuclear peddlers from Russia descended on Germany with offers to sell export energy from Russian nuclear power plants – explaining to the poor Germans how, come winter, their energy security would go kaputt. And it did – just not Germany’s. France’s. Talk about irony.

Incidentally, it was France’s energy system, too, that came under a strain of heavy demand a few years back when Europe was undergoing a record streak of scorching heat. Several reactors had to be switched off on account of the dangerously high temperatures, and France resorted to import contracts to stabilize power supply.

It turns out that energy troubles the world’s most pro-nuclear nation is facing are the best illustration of the ample risks such overdependence on nuclear energy brings: Winter or summer, cold or hot, nuclear reactors demonstrate how susceptible they are to extreme weather patterns. Yet weather extremes are only bound to become more frequent as climate change progresses. France’s reliance on nuclear power does not enhance but undermines its energy security, and makes it that much more vulnerable to the challenges of climate change.

Meanwhile, Russia’s leader Vladimir Putin uses France’s example to argue just the opposite – Russia’s supposed need to increase the share of nuclear in its energy production complex. Russia is still nurturing plans to build up to forty new nuclear reactors – a prospect that spells exorbitant budget expenses, proliferation of corruption schemes at new construction sites, and a growing risk of accidents owing both to counterfeit and subquality equipment and to that simple fact that the world has yet to invent 100-percent failproof reactors.

Last year, Germany, Switzerland, Belgium, Japan, Italy, and many other nations declared, in one way or another, their intent to pursue a safer, more reliable alternative. This winter, Germany’s choice has paid off, while France has become an unfortunate case in point for proving how reckless betting on nuclear power is.

Russia, with such a vast menu of renewable energy sources at its disposal, would be well served by the lessons France has failed. Somehow, though, the Russian government still wants its energy security a la French.

Vladimir Slivyak, co-chiar of Ecodefense, is a frequent contributor to Bellona.