Russian and Belarusian environmentalists are concerned over a contract agreement signed by the Belarusian president, Alexander Lukashenko, for construction of the first two nuclear reactors in the Stalinist country, which was signed earlier this week.

Published on October 13, 2011 by Charles Digges 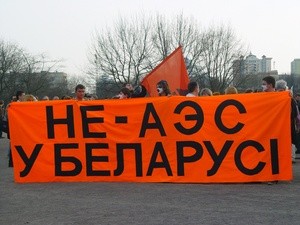 Belarus’s state-owned Directorate for Construction of Nuclear Power Plants signed the contract with Atomstoriexport, the foreign construction wing of the Russia’s state nuclear corporation, Rosatom, for the construction of a 2400 megawatt plant of the untested AES 2006 (NPP -2006) design.

The site for the plant is in Ostrovets in the Grodno region, close to Lithuania – which has vociferously protested the building of the nuclear power plan.

The cost with infrastructure is put at $9.4 billion. Russia has pledged financing, but discussions continue on the amounts and terms and Moscow has yet to issue any clear idea of the loans and credits it is willing to extend to Minsk.

The road to building the nuclear power plant has been paved with abuse and arrests of environmental activists and flagrant violations of international conventions requiring Belarus to submit its building plans to neighboring nations for approval.

The vice grip on public opinion against the plant has only been tightened since Belarusian President Alexander Lukashenko’s reelection a little over a year ago.

The new contract was denounced Wednesday by over 50 environmental organizations from Belarus and Russia as being dubious and opaque.

The groups said in a joint statement that, “[The deal] was struck without regard to the opinion of the public and in violation of applicable regulations to cater for the interests of a narrow circle of people occupying positions in the government and directly in state-controlled corporation Rosatom,” as quoted by the Naviny news agency.

The new contract is all the stranger as the plant is already under construction, as confirmed by Lukashenko in a Tuesday news conference, and because Russian and Belarus already reached an agreement to build the plant during the first quarter of 2011.

The Belarusians broke ground on the plant in March amid a hail of controversy from environmentalists, and an official reproach from the Espoo Convention’s Implementation Committee.

But experts and representatives of the affected countries – which include Lithuania, Russia, Poland, Austria and Ukraine – have still not been presented with the entire version of the environmental impact study for the Ostrovet’s nuclear power plant, which numbers over 3,500 pages.

According to Vladimir Slivyak, co-chair of Russia’s Ecodefense, numerous documents that give legal, financial and technological basis for continuing to build the plant are lacking.

He said the document signed by Lukashenko with Atomstroiproekt earlier this week was window dressing against a tide of political difficulties and post-Fukushima backlash.

“I would say this is a rather symbolic demonstration that the deal between Russia and Belarus is still alive despite various political troubles and Fukushima legacy,” he told Bellona in an email interview.

“The signed document itself is kind of secondary and not principal. There are many more important papers that still have not been developed and signed between countries,” he wrote.

Indeed, the impact of the March 11 earthquake and tsunami in Japan that destroyed the Fukushima Daiichi nuclear power plant, constitution the world’s most serious nuclear accident since Chernobyl, has rattle environmental nerves and fundamentally changed the international discussion of nuclear power.

“[The contract for the Belarus nuclear power plant] is a political signal that Lukashenko still alive and counting on help from Russia, including financial and technological,” said Slivyak.

IAEA steps in with promises of cooperation

The International Atomic Enegy Agency on Wednesday further legitimized what is by all accounts an extremely rag-tag project by promising to cooperate with Belarus in the Ostrovets plant’s safe operation, the the Interfax Russian news agency reported.
“The IAEA position is that we do not interfere with another country’s decision, since this decision must be made by the sovereign state without foreign intervention,” IAEA Director General Yukiya Amano told Interfax news agency.

“Whether Belarus will work in the nuclear power sector and build its own NPP will entirely depend on the decision of the Belarusian government,” Amano said.
“If Belarus decides to do so, then the IAEA is ready to help Belarus use nuclear power as safely and steadily as possible,” he said.

The IAEA made no mention of the myriad violations of international public opinion represented by the Espoo Convention.