A signature-collecting campaign is under way in Finland, launched by an anti-nuclear movement called Ydinverkosto and nine other non-governmental organisations, to make a stand against the country’s nuclear industry. The activists demand to have all decisions regarding nuclear projects in Finland decided via national referenda and hope to prevent the construction of the new reactor planned for Olkiluoto Nuclear Power Plant (NPP).

Published on September 16, 2011 by Andrey Ozharovsky, translated by Maria Kaminskaya 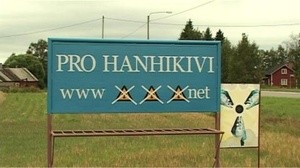 Meri-Lapin Ydinverkosto, or the Nuclear Network of the Northern Finnish area of Meri-Lapin – an organisation that describes itself as a popular movement fighting against uranium mining and nuclear power, and in support of renewable energy – and nine other NGOs are trying to stop several nuclear projects in Finland via national referenda that they demand be held during the municipal elections of the autumn of 2012.

The projects at issue are both current – the construction of an EPR reactor at Olkiluoto, which is  being completed, and the Posiva Onkalo geological nuclear waste repository near that nuclear power plant – and envisioned ones, such as the new reactors the Finnish company Fennovoima is expecting to build and is in the process of obtaining construction permits for, and uranium production in Lapland, also pending issuance of mining licenses.

At Olkiluoto, a site on the shore of the Baltic Sea’s Gulf of Bothnia, a third reactor is planned to be added to the two 860-megawatt BWR reactors already in operation. A decision-in-principle for a fourth reactor was also issued by the Finnish parliament in July 2010.

The location of Fennovoima’s nuclear power plant has not yet been settled upon, but the Finnish government decided to grant the company the construction permit in April 2010. If brought to fruition, Fennovoima will become the third commercial nuclear plant operated in this small Baltic nation, besides Olkiluoto and Loviisa NPPs, operating two 448-megawatt Soviet-designed VVER-440/213 PWR reactors.

And as for the nuclear waste repository project, the Finnish nuclear waste management company Posiva is developing a research tunnel known as Onkalo in the granite bedrock close to Olkiluoto NPP. The idea has little support among experts, including geologists, who believe there are significant concerns having to do with the site’s geological stability that may turn the project into an environmental disaster waiting to happen.

The future nuclear repository, developed as it is in such close proximity to the seacoast, is causing all the more concern because, according to HELCOM – the Baltic Marine Environment Protection Commission (or Helsinki Commission) – the Baltic Sea is already the world’s most radioactively contaminated – a combined result of fallout from the 1986 nuclear disaster at Ukraine’s Chernobyl Nuclear Power Plant, nuclear waste dumped by the British reprocessing facility Sellafield, and waste discharged from nuclear facilities in Sweden, Finland, and Russia.

The various risks and problems of all these projects are something that not only environmentalists and experts, but apparently also the Finnish public in general are uncomfortable with: According to Senni Lousujärvi, an activist based in the city of Oulu, a thousand signatures has been collected in the first two days of the campaign alone. Altogether, 50,000 signatures are anticipated to be collected within six months.

The website where those wishing to support the campaign are directed (in Finnish) informs visitors that one reactor is at this time being built in Finland and a “decision in principle” has been made guaranteeing permits to build another two. Dozens of uranium production projects are also under consideration in the country, the website says. “Nuclear energy and uranium production projects in Finland are an exceptional case because none of the other countries of the [European Union] are developing nuclear projects any longer,” the campaigners say.

They also say that nuclear energy is associated with “excessive risks.” In particular, the campaigners mention the risk of accidents resulting from equipment failures, human error, terrorist acts, or a natural catastrophe.

Additionally, they say, nuclear power plants are dangerous even under normal operational conditions, when they don’t experience accidents or emergency situations. The website cites German studies that have determined a more than double increase in childhood leukaemia incidence in children residing near nuclear power plants.

The campaigners also point out that the problem of long-term storage of spent nuclear fuel and other waste generated by nuclear power plants has not been successfully solved anywhere in the world. They mention other problems, such as the health risks associated with uranium production and the unprofitability of the nuclear energy industry.

But despite the apparently strong support the campaign is seeing from the general public, the activists may yet have an uphill battle ahead getting these many voices to be heard via a vote that will have a lasting, legally binding effect – such as a national referendum.

Referenda are not very popular in Finland, and the procedure is not very clearly defined in the national law. Opposition to the nuclear referendum idea may, too, be expected from the government.

At the same time, a direct public vote can be an efficient tool, as evidenced by Italy, where an overwhelming majority of voters cast their ballots in the national referendum last June against further development of nuclear energy, effectively crashing the future of the nuclear industry in that country.

“Referenda are not a new phenomenon for the nuclear power industry,” the activists behind the signature-collecting campaign write on the campaign website. “A decision was made in Austria in 1978 to stop the launch of a newly completed NPP, and in Sweden, the idea of developing nuclear energy was rejected in 1980.”

Besides campaigning for referenda and collecting signatures, Meri-Lapin Ydinverkosto and the other organisations call for such actions as refusing to buy nuclear-produced electricity and boycotting companies that manufacture products with the use of power generated by nuclear power plants.

In fact, the Finnish environmental movement is quite active in its anti-nuclear protests – both against reactor projects at Olkiluoto, and the very operation of this and other nuclear power plants, and uranium production in Lapland. Two anti-nuclear blockades have already been held near Olkiluoto, in 2010 and 2011.

Renewable energy is also high on the environmentalists’ agenda. At present, four reactors are altogether in operation at Finland’s two nuclear power plants, with a combined capacity of 2,717 megawatts, but they only provide around 29 percent of total energy in the country. Environmentalists believe energy efficiency and energy conservation measures, as well as the development of renewable energy, could take over that market share, giving Finland a chance to completely phase out nuclear power.

Information quoted or cited here with reference to the site hosting the signature-collecting campaign against nuclear energy projects in Finland has been translated into English from the Russian translation used in the original Russian-language story.