Italy began to vote Sunday on a two day referendum considering several issues, the most important of which is whether the country will reinvigorate it’s nuclear power program, which was abandoned in the wake of Chernobyl in 1987. 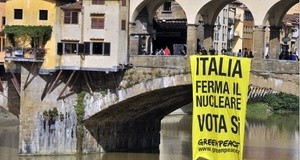 Should the referendum – whose polls close on Monday at 3pm Central European Times – succeed, Italy will become the third European country to rule out a future lighted by nuclear power since the Fukushima Daiichi disaster began on March 11.

Even German engineering giant Siemens – one of Europe’s preeminent nuclear power plant builders – announced it would be backing out of the nuclear business.

Germany and Switzerland opt for renewables

Nuclear power plays an enormous role in the energy mix of both Germany and Switzerland – 40 percent in Switzerland – and both the Germans and the Swiss say they intended to make up the difference with renewable energy development.

But Italy has for the last 20 years been the only major European Union country with no nuclear power program, relying instead on oil and other energy source imports.

Not the first referendum to stop nuclear in Italy

Nuclear power was stopped in Italy by a previous public referendum in 1987 that halted nuclear power development – including an almost completed plant at Montalto di Castro, north of Rome – for five years.

But the referendum proved to have more political staying power than that, and forays into developing nuclear power were anathema until Prime Minister Silvio Berlusconi came to power with an agenda to restore Italy’s nuclear energy program by 2014.

His government has said that nuclear power is vital to providing 20 percent of Italy’s energy.

But the disaster at the Fukushima plant, which was crippled by the tsunami and earthquake that hit northern Japan in March, has changed the debate entirely. Big business opponents of stopping nuclear power in Italy have chalked the referendum up to “nuclear-phobia.” But the Fukushima disaster has show there’s more to it than that.

Scientists with the administration of US President Dwight Eisehower, who originally forwarded the idea of an international uranium fuel bank – estimated that full scale nuclear meltdowns would only occur once every 15,000 years. Japan has recently confirmed that full meltdowns took place at Fukushima Daiichi’s reactors No 1, 2 and 3 during the first week of the crisis.

Now Salvatore Barbera, from the campaign group Greenpeace, says people have seen the dangers and will reject nuclear energy in the referendum.

The leader of the Greens in the European Parliament, Daniel Cohn-Bendit, has called on Italians to vote against nuclear power, saying that a success on this issue would be “an important signal” to the rest of Europe, Agency France Presse reported.

A 50 percent turnout for the referendum is required for its results to be binding, and the Berlusconi government is hoping it will be difficult to reach the required numbers at polling stations, especially on a holiday weekend, press agencies reported.

Berlusconi, directly or indirectly, controls six of Italy’s seven main television channels and news bulletins had scarcely mentioned the vote, despite nuclear power being an issue that stirs passionate feelings, until a few days ago when the country’s media watchdog stepped in, the Guardian reported.

By the times the polls closed sunday at 7pm local time, 30 percent of voters had turned out, leaving hope that Monday would see another 20 percent.

Other issues at hand for Berlusconi

The referendum ballot also contains a question on whether to strip the deeply unpopular Berlusconi, 74 – who is a defendant in four ongoing trials involving alleged bribery, fraud and having paid for sex with a 17-year-old girl – of his immunity from prosecution.

But the nuclear question is bar far the biggest issue to Italians as they go to the referendum, and polls show a clear majority in favour of dumping nuclear power.

It was only a year ago that the Berlusconi government ramped up its nuclear rejuvenation, and it did so with a vengeance. Objections to it were not tolerated. Deals and contracts were lined up with the French – Europe’s biggest nuclear vendor.

When the tsuami hit Fukushima Daiichi, the Berlusconi government realized it could not continue business as usual and so announced a one-year hold on developing its nuclear industry.

Meanwhile, it sought through the court system to ban the referendum currently taking place – a move that was struck down last week by the Corte Suprema di Cassazione.

Greepeace’s Barbera said, too, that the year-long hiatus in developing Italy’s nuclear power capabilities was not nearly enough to address public fears.

“Fukushima changed people’s minds, but they already knew that other forms of renewable energy supplies were the only way forward,” said Barbera.