With 83 percent of the vote on a two-day referendum counted, 57 percent of Italian voters turned out to vote overwhelmingly against their country’s continued attempts to launch a nuclear power program, making it the third nation in Europe to dump the peaceful atom in the wake of the Fukushima Daiichi crisis. 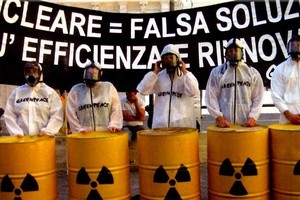 According to a representative of one European environmental organization, who declined to be named because the figure was as yet unofficial, Italians crushed a future with nuclear energy by 95 percent. The final figure is not likely to be far off – Reuters reported figures of some 90 percent of voters casting ballots against nuclear power.

Germany decided to shut down its seven oldest nuclear power plants after the Fukushima Daiichi disaster and decided last month to close all its reactors by 2022, in a major policy reversal by Chancellor Angela Merkel. Switzerland, similarly, is poised to close its five reactors –which deliver 40 percent of the country’s energy – by 2035.

Both countries have said they are not willing to run a Fukushima-scale risk and will make up the difference by using renewable energy. Japan, too, has called off its own further plans to develop nuclear power.

The results of a poll commissioned by the Japanese newspaper Asahi Shimbun taken in Russia, France, China, the United State, Japan and South Korea, however, show that the populations of these countries are opposed to their government’s nuclear plans.

‘Another one bites the dust’

Bellona welcomed the outcome of the nuclear referendum, and Bellona nuclear physicist Nils Bøhmer jubilantly summed up the results saying, “Another one bites the dust.”

“This is another step in the right direction for Europe,” continued Bøhmer. “This decision by the Italian people means a safer Europe with less radioactive waste to worry about in the future.”

Bøhmer added that, “it is important that Italy, like Germany, put a large effort into developing renewable energy.”

Bøhmer also emphasized the role that Carbon Capture and Sequestration should play in Italy as it shifts from an energy economy where 50 percent of its electricity needs are met by burning imported gas. CCS, said Bøhmer, would make that transition safer by containing climactically dangerous carbon gasses on which Italy will for some time have to rely.

“In addition, the focus in Italy must also on energy efficiency,” said Bøhmer. on

Italian Prime Minister Silvio Berlusconi admitted early in the day that the referendum against nuclear power appeared poised to succeed, saying at a press conference that “Italy, following the decision that the Italian people are taking in these hours, probably will have to bid farewell to the question of nuclear power plants.”

Italy, like Japan, is prone to earthquakes, yet the Berlusconi government promised to supply up to 25 percent of the country’s energy by 2020 with a giant nuclear build out that would have freed it from oil and gas imports – and dealing with this issue will be thorny as Italy makes a transition to more renewables and CCS.

But Vittorio Cogliati Dezza, president of the environmental organisation Legambiente, was hopeful, telling the Guardian that, “The era of nuclear [energy] is coming to an end today. Definitively. A new season of development for the country is beginning.”

Berlusconi had sought to compel Italians to boycott the referendum, which also contained several other measures that will strip him of his immunity to sit trial as a defendant in four ongoing trials for fraud, corruption and paying for sex with a 17-year-old nightclub dancer.

Berlusconi had also hoped the holiday weekend and the fact that Italy has not held a successful referendum in 25 years because of low voter turn out would work in his favor.

He himself and members of his government abstained from the vote, and also slapped a gag about the referendum on the six of the seven television stations that his government directly controls, until Italy’s press watchdog group stepped in a week ago.

On a grassroots level, various Italian newspapers reported that vendors in some of Italy’s prime vacation spots were offering discounts and perks to guests who could prove they had voted. Beach chair rentals were going for two for the price of one to voters, reported Corriere della Sera, and beach side ice cream vendors were offering free gelatos to the children of voting parents.

‘We do not want nuclear power plants’

This is not the first time that Italians have spoken out on a popular level against Nuclear power. In 1987, following the explosion at Chernobyl. Italians went to the polls and sent a firm no to their government’s plans to develop nuclear power.

“I am really happy. I mean twenty years ago we said the same thing against nuclear power, Rome resident Flavio Rellandini told Reuters in an exit poll interview. “I just don’t understand why they spent all this money to reconfirm this … We do not want nuclear plants.”

That referendum was only meant to stop nuclear power development for five years. But it proved to have more political staying power than that, making Italy the only G8 country that does not have a nuclear power program.

Forays into developing nuclear power were anathema until Prime Minister Silvio Berlusconi came to power with an agenda to restore Italy’s nuclear energy program by 2014.

Indeed, It was only a year ago that the Berlusconi government ramped up its nuclear rejuvenation, and it did so with a vengeance. Objections to it were not tolerated. Deals and contracts were lined up with the French.

When the tsuami hit Fukushima Daiichi on March 11, the Berlusconi government realized it could not continue business as usual and announced a one-year hold on developing its nuclear industry.

Berlusconi had sought through the court system to ban the referendum – a move that was struck down last week by the Corte Suprema di Cassazione.

But Italy will in the near term have its work cut out for it meeting energy demands and quelling dissatisfaction with exceptionally high energy bills, which many economists say has stymied the country’s economic growth.

The vote, however, shows part of a growing post-Fukushima trend that both in countries where nuclear power continues to be government supported and where it has been shown the door that populations are willing to make sacrifices for safety.