COMMENT: In Japan, the IAEA abandons ship, shows its helplessness, but continues to carry a PR torch for the nuclear industry

MOSCOW – On March 21, after returning from a short visit to Japan, International Atomic Energy Agency (IAEA) Director Yukiya Amano participated in a meeting of the Agency’s Board of Governors in Vienna. He laid the responsibility for nuclear safety on the group’s member states, leaving for himself the roll of lobbyist and propagandist for nuclear power.

Published on March 23, 2011 by Andrey Ozharovsky, translated by Charles Digges

The IAEA does not deal with nuclear safety

In the wake of the Fukushima Daiichi crisis in Japan, a refusal of nuclear energy in many countries is becoming a reality. Perhaps Russia will not participate in that, but this is an internal matter.

In a speech, Amano expressed his true offense in a way that showed criticism is in vain: “Since the accident, I have tried to address some widespread misconceptions in the media about the IAEA’s role in nuclear safety. These misunderstandings fuelled some criticism of the Agency’s response, which was not always justified. I explained that we are not a “nuclear safety watchdog” and that responsibility for nuclear safety lies with our Member States.”

The agency itself did not spread fairytales about “safety guarantees,” but did not deny the many misconceptions in the press. Confirmations and assurances of “safety guarantees,” “high evaluations,” and “expert accompaniment of  projects”  allegedly given were frequently-heard phrases in the Russian and world media.

“g, on the advice of nuclear corporations and states, think that they can complain to the IAEA that new nuclear power plants are being constructed in their regions, that the IAEA will give some kind of guarantee of safety,  that with the permission of the IAEA, all will be resovled,” wrote Tatyana Novikova, a Belarusian anti-nuclear publicist in her appraisal of the situation.

Amano himself is beyond reproach. Last summer, in an interview with Bellona Web in Lithuania, he said, “We guarantee only assurances in non-proliferation [of nuclear weapons]. Safety is the responsibility of the nation members.”

The IAEA deals in nuclear propaganda

The statutes of the IAEA, adopted in New York on October 26, 1956, define the goals of the organization as such: “The Agency shall seek to accelerate and enlarge the contribution of atomic energy to peace, health and prosperity throughout the world. “ And thanks to Three Mile Island, Chernobyl and Fukushima, nuclear energy is understood by larger and larger groups of people that nuclear power and health and welfare are irreconcilable, the leadership of the IAEA must weasel its way out and focus on promoting dangerous nuclear power stations by simple means – lobbying and propaganda.

Amano could not participate in the propaganda this time around: He tried to lift the fog, to talk about the same old “nuclear danger,” the responsibility from which he had just begged off: “Nuclear energy remains an important and significant option for many countries as a stable and clean energy source.” 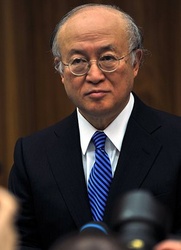 One has to by a cynic or just a person without a conscience to now, while his own people are suffering from the consequences of the radioactive accident than they are from the earthquake or tsunami, assert that nuclear power is “stable and clean.”

Amano is a lousy guy. A liar. It’s his job. Of course, no one expected him, having arrived in his native country, to throw himself into helping the Japanese liquidators of the disaster. But he didn’t even bother to go anywhere near the plant. And having returned to nuclear free Austria, he continued his habitual droning about “stable and clean” nuclear energy.

“The Agency’s role in nuclear safety may need to be re-examined, along with the role of our Safety Standards,” Amano continued in his address to the IAEA Board of Governors.” That is, there is still a role for the IAEA in nuclear safety? But apparently this role is just propagandistic.

On March 11, the day the catastrophe began, Amano announced that “the IAEA will continue to be ready to provide any form of technical assistance if Japan asks for it. It seemed the offer for help might be genuine: The IAEA could have given realistic prognoses and advice and helped in word and deed. But experts on accidents, neither intelligent of adequately prepared, could nowhere in the agency be found.

Recently it became know that over 10 days, the IAEA sent three bureaucrats and a team with Geiger counters. And that was it. About exactly what kind of help the agency offered Japan was discussed on Tuesday by Amano. He announced that during his visit to Japan the support of the agency was implemented: “It consists of  three fundamental elements. Firstly, an agency official has been sent to Japan for coordination of our  efforts of assistance. Secondly, Japanese authorities have agreed with the designation of two officials of the agency on cooperation to work closely with the Nuclear and Industrial Safety Agency (NISA) of Japan. Third, the radiation monitoring team of the agency has begun to send results of its measurements back to Vienna, including measurements from areas close to Fukushima.”

There’s all the help – the designation of three bureaucrats whose activities will help Japan deal with the accident, and the sending of a team with Geiger counters, who even dared to get close to the accident at the nuclear power plant. Wow, what can you say – the IAEA in all its glory. What  does the IAEA need its big red skyscraper in Vienna for? And what are its numerous bureaucrats up to there – think they might be thinking up different combinations of the words “stable,” “clean” and “nuclear?”

Maybe the IAEA’s Geiger counters measured something. It’s possible, but Amano is trying to steer clear of concrete figures. He says: “High levels of contamination,” “high levels of radiation were discovered 16 kilometres from the plant,” and so on. Specialists are not citing one figure, not even terminology characteristic of a professional, about the  strength of the doses, about the concentration of radionuclides, and nothing about abstract “radioactivity.” Incidentally, even without the dare-devils from the IAEA’s radiation monitoring team, who crept up on the 16 kilometre mark from the plant, it was already well known that doses on the industrial territory of the plant exceed 500 microsieverts per hour, and by the reactor blocks, they reach 400,000 microsieverts per hours. Tokyo Electrical Power Co (TEPCO) reported the figures and Bellona Web reported them. We didn’t find out anything from the IAEA.

Another thing in the IAEA’s favor is that Adamo held daily briefings conducted in Vienna. But during these briefings, information about the real conditions of the Fukushiman plant, about the work being carried out at the plant, about the levels of radiation and contamination, were not mentioned. The IAEA simply collected TEPCO’s information and, with nearly a half day’s delay, published it on its own Website while frequently criticizing the Japanese for supplying insufficient information .

What can be expected of the IAEA?

Japan has not and will not be helped by the IAEA. This organization will not help in any other country that is fated to experience the next radiation accident.

It is time to understand that the IAEA is not “the UN organization responsible for nuclear safety.” One must understand the IAEA as a lobbyist for the interests of the nuclear industry acting on an international level. Then everything will fall into its correct place – and the IAEA’s announcements will cease to be taken for some “guarantee of safety.” One must relate to them without emotion, like any other commercial image-spinning advertisement.

After all, not one reactor has been closed by the IAEA. The old and dangerous VVER-440 type reactors at Germany’s Nord nuclear power plant were closed by a decision of that country’s government. Dangerous VVER-440 type reactors in Bulgaria and a Chernobyl-design RBMK-1500 in Lithuania ceased operations as a demand of these counties’ ascent into the European Union. And Fukushima … the IAEA did not say one word about the problem until the accident happened. This means the agency is either incompetent, or more likely, is not independent.

It would be really nice to believe that Amano confessions will be heard after Fukushima and perceptions of the IAEA will change. It is, after all, apparent that the IAEA now does not act as a nuclear watchdog, but as a propagandist mutt.