The construction of a nuclear power plant in Belarus with lavish Russian assistance will begin in September, the head of Russia’s nuclear agency, Rosatom, said on Tuesday, confirming suspicions that have been aloft since last Thursday.

Published on January 25, 2011 by Charles Digges 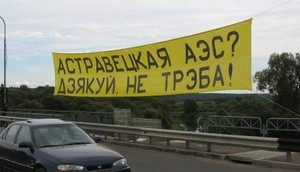 An inter-governmental agreement may be signed next month, Rosatom’s Sergei Kiriyenko said during a meeting Tuesday with Belarusian Prime Minister Mikhail Myasnikovich, according to RIA Novosti, confirming that the project will move ahead.

Last week, Russian Prime Minister Vladimir Putin and his Belarusian counterpart, Mikhail Myasnikovich, met to negotiate and sign a “framework agreement” that was expected to be the first step toward building the highly unpopular nuclear plant in the Belarusian city of Ostrovets, 45 kilometres from Vilnius, Lithuania.

Environmental opinion on the project ranges from outrage to plain awe at the scale of misguided financial investment and complete disregard for public sentiment in both Belarus and Lithuania, the latter of which has cried foul over a nuclear power plant so close to its capital. Bulding the plant against Lithuania’s objections will violate international agreements like the Espoo and Aarhus conventions.

Belarusian environmentalists have also argued against bringing nuclear power to the country, as hundreds of square kilometres of forest and swamp in southern Belarus remain uninhabitable because of fallout from the 1986 Chernobyl nuclear power accident.

Minsk has scoffed at the environmental worries, saying modern nuclear power is safe and that Belarus needs to diversify its sources of energy. And where rhetoric fails, simply silencing environmental complaints is a route Minsk is not shy about.

Kiriyenko said a $6-7-billion credit agreement from Russia is likely to be inked in June.

“The contract will envisage that the construction of the first unit will be finished by 2017, but given that we can speed up the process, it may be finished by 2016,” Kiriyenko told reporters at a press briefing in Minsk.

“We will try and get it done by the end of 2016,’ he continued at a press conference in Minsk. “We are trying to save time every way we can.”

The entire plant is expected to be completed by 2025.

Russia’s state nuclear corporation Rosatom, said Kiriyenko, is anxious to accelerate the work. Ground preparation has been in progress for several months and actual construction will begin in September, said Myasnikovich.

Belarus has still not shown Russia the money

Russian state engineers have begun drafting the station’s design, despite the fact that no contract has yet been signed or money paid for the work, Kiriyenko said.

Vladimir Slivyak, co-chair of Russia’s Ecodefence, a powerful environmental group, predicted nothing but headaches and for Russia and duelling corruption in Minsk and Moscow as the project moves forward.

“This may become Rosatom’s most problematic project in the future,” said Slivyak in an email interview.

“First corruption on both sides is enormous, and will swallow a large portion of the money which has so far been promised only by Russia, and will cover only part of the costs,” said Slivyak. “I would expect costs to be two to three times higher than the already announced cost of $6 billion.”

As Slivyak noted in an earlier interview with Bellona Web, Russia is simply in no position to dig itself into such a financial ditch. Russia is hardly coping with its own nuclear reactor construction program, approved until 2015. According to the Accounts Chamber of the Russian Federation, 60 percent of that construction has been plagued with delays owing to problems with funding, Slivyak said.

“Meanwhile, Russia is pushing along megalomaniacal projects like the Olympic Games in Sochi and the football championship in 2018. Other projects may come up in the meantime, and where will the money come from?” Slivyak said. Russia is simply not in a very beneficial situation right now, he added.

The politics of dealing with an unstable leader

Slivyak also noted that there are bound to be diplomatic scrapes with Belarusia’s obstreperous neo-Stalinist president Alexander Lukashenko, which will only serve to delay the completion of the plant – if it gets completed at all.

Lukashenko’s chief leverage in causing waves with his Moscow benefactors will be provided by they discount prices at which Russia delivers oil and gas to Minsk – something he will be able to use to his advantage to dictate policy on a nuclear power plant that will be 50 percent Russian property.

Aside from this, Russia plans to build the plant using untested VVER-1200 type reactors, raising numerous safety issues about the plant itself. The design is, at this point, merely experimental, yet Belarusian legislation stipulates that the technology chosen for construction of a nuclear power plant must be tested in practical operation.

Initial construction works have already started in Ostrovets even as no sufficient geological data exists to support the selection of the site – something that the official environmental impact assessment report prepared by Belarus for Ostrovets admits in its analysis of the safety of the future plant.

Independent and official experts from Russia, Belarus, Lithuania, and Austria earlier pointed to significant gaps in the official environmental impact report – such as that it downplays considerably the plant’s anticipated impact on the surrounding environment and the health of the local population both as part of standard-mode operation and in case of an accident.

Why should Russia bother?

So what does Russia have to gain buy sticking its financial neck out to finance a dicey project in what diplomatic circles call “Europe’s last dictatorship”?

According to Slivyak, the clear reason for Russia to pursue the plant at all is to export electrical power at higher prices to European Union countries who have the money to pay the mark up  – something the Ostrovets plant will be in a good geographical position to do.

But this brings problems of its own. With the plant on Belarusian territory, Lukashenko is free to torment Russia’s electricity cash cow to the EU whenever he wants to put Moscow over a barrel for it’s own purposes, Slivyak suggested.

Despite the notion that the Belarus NPP may provide some modicum of stability to Minsk’s backward economy, neither Belarus nor Russia can boast a true market economy of their own.

This, in Slivyak’s view, indicates that the ballooning costs of building the plant will be no impediment to its completion.

“When the money is coming from Russia’s state budget, the people implementing the project will be only to happy to see costs grow, as that will give them more opportunities for corrupt behaviour,” said Slivyak.

“No one will return the money, but Lukashenko and Rosatom will share the income from selling the electricity,” he said.