BRUSSELS – An expert hearing was held at the European Parliament earlier this month regarding the forthcoming EU Directive on Nuclear Waste. Different approaches to nuclear waste management policies by EU member states were discussed in order to shed light on what a strong and comprehensive directive should contain. 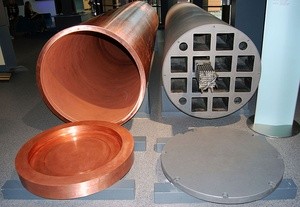 The attendees heard that an all-encompassing definition of nuclear waste must be included in the forthcoming directive, as well as some of the necessary characteristics of acceptable geological repositories for nuclear waste.

The hearing was co-hosted by Anni Podimata, a Greek socialist and Rebecca Harms, a German green member of the European Parliament. The hearing was also held in cooperation with green NGO Friends of the Earth Europe.

A repository would have to guarantee a safe burial of highly radioactive waste for up to 1 million years. In the EU, the European Commission as well as the relevant Council working groups and ENEF (European Nuclear Energy Forum) are trying to find a way to solve the pressing problem of final waste storage. In autumn, the Commission will present a proposal for a nuclear waste directive to create common rules for nuclear waste storage in the EU. Meanwhile, the public consultation on this issue has started and will continue until the end of May 2010.

The expert hearing centered on the issue of what an effective and comprehensive directive should entail in light of member states’ experience with nuclear waste management policies.

Johan Swahn, from the Swedish NGO Office for Nuclear Waste Review (MKG), explained that the nuclear industry is in the process of applying for permission to implement a new policy for nuclear waste disposal commonly known as the KBS method. The method involves storing high-level radioactive waste in copper canisters with clay buffers and then storing them permanently at -500m in the Swedish bedrock.

“The problem with this and most methods currently under consideration in Europe is that there is a great degree of uncertainty. In Sweden’s case, it is uncertain whether the copper canisters will be subject to corrosion, or whether they would withstand the ice ages which lay ahead over the next 100.000 years,” Swahn explained.

“Acceptable final geologic repositories must be identified and used across Europe, but research, discussion and resources must be put into defining what qualifies as an acceptable repository”, he continued.

Mycle Schneider, a consultant working with the Greens at the European Parliament, pointed out that other key issues must be tackled whilst drawing up the final EU directive.

“The EU needs a legally binding instrument where all types of radioactive waste are incorporated, especially mining waste. This is critical to a good directive,” Schneider emphasized.

Schneider told the attendees that greater transparency and public access to documents is also in dire need.

“At present, commercial confidentiality limits are being dictated by nuclear energy companies rather than by public authorities. This cannot be the case and should be clearly stipulated at EU level,” Schneider explained.

Overall, it was clear to the attendees that an all-encompassing and strong directive is needed. This is in spite of the position held by many members of the European institutions and environmental NGOs – including Bellona – that nuclear energy poses a hazard both to the environment and to human health.

“The fact that we have a nuclear waste problem on our hands makes the case for a comprehensive and effective directive even stronger,” concluded MEP Harms.