BRUSSELS – On the even of the Copenhagen summit, Bellona hosted an open hearing at the European Parliament on Russian nuclear expansion and Climate Change on December 3rd to discuss key issues as whether Russia may be using the international forum of the climate negotiations to promote nuclear energy as a tool to reduce greenhouse gasses – a position Bellona vociferously opposes – and whether this may be part of a commercial strategy for Moscow in Copenhagen.

Published on December 6, 2009 by Veronica Webster 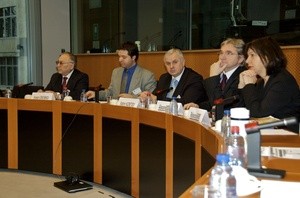 The event was co-hosted and chaired by Rebecca Harms, Member of the European Parliament. Speakers included Professor Hussein Chechenov, member of the upper chamber of the Russian Parliament; Professor Vladimir Kuznetsov, senior researcher at the Vavilov Institute of the History of Natural Sciences and Technology, former Russian nuclear inspector and member of the Public Council of Rosatom; and Alexander Nikitin, chairman of Bellona in St. Petersburg and prominent Russian environmentalist.

Russia plans to rely heavily on the use of nuclear energy domestically and abroad. As Professor Kuznetsov explained, there are currently 213 nuclear reactors and 454 storage sites holding radioactive waste in Russia. In fact, half of the world’s stock of radioactive waste is stored in Russia and there are plans to build 30 new reactors by 2020 at home and several others in India, China and Iran. Although Nikitin expressed doubt as to the capacity of the Russian Federation to produce this many reactors within this timeframe, it is clear that Russia is planning a significant nuclear expansion over the coming years.

The argument in favour of such an expansion, as presented by Chechenov, is that there is a global need – and Russian need in particular – for low CO2-emitting energy in response to the threat of climate change.

“Energy shortages and insecurity could contribute to mass migration from developing nations and colder nations to areas such as Western Europe. We need to produce energy without continuing to contribute to global warming through the burning of fossil fuels”, said Chechenov.

Although this need clearly exists, the prospect of relying on nuclear energy poses several serious problems.

“The amount of pollution resulting from the entire production chain of nuclear energy is astounding. Pollution levels could be compared to those of fossil fuels such as gas. Moreover, when faced with the challenge of climate change, we seem to forget that a potential catastrophe such as Chernobyl in 1986 could cause more damage than climate change itself,” explained Nikitin.

“Climate change is being misused to promote a nuclear renaissance in Russia. Russia’s own experience with radioactive waste illustrates the risk of responding to the challenge of emission reductions with nuclear expansion,” underlined Harms.

In response, Chechenov argued that “nuclear was unavoidable” as Moscow could not be heated through the use of renewable energy.

“In fact, Moscow is a good example of a city capable of considerable gains through energy efficiency. In addition, there is ample scope for the expansion of renewable energy generation, such as wind energy in the north”, explained Harms.

Chechenov estimated that around $1bn has been invested in renewable energy research and development programmes by the Russian government. In the meantime, Rosatom’s export revenue alone for 2008 amounted to $3bn, with total revenue exceeding $10bn. This data suggests that investment in renewables, let alone energy efficiency, is of secondary importance.

“In the end, nuclear energy is not only a serious safety risk but it also diverts money away from safe, renewable energies,” argued Nikitin.

“An open discussion such as this one held today should be repeated in Moscow in order to bring stakeholders to the table to talk about promoting less dangerous, low CO2-emitting energy sources. Such talks are not taking place and, as a result, notable opportunities could be missed”, Harms concluded.

Russia will not be the only country that will hope to be including nuclear in its new climate policies. Britain’s Gordon Brown is currently backing a large nuclear build-out for his country, and though US President Obama has no plans to construct new plants, US officials are investigating the possibility of putting more of a power burden on older reactors, including Three Mile Island.

This is problematic for the United States as most of its reactors are well beyond their engineered lifespans and current inspections to see it they can handle the extra load are revealing disturbing hazards.