NEW YORK – With much anticipated talks on slashing levels of greenhouse gasses at Copenhagen approach, it is more and more apparent that several of the high powered delegations from the 192 nations expected to be represented there will be tabling suggestions for further use of nuclear power, which is touted by the industry for its ability to produce power with no CO2 emissions.

Published on November 24, 2009 by Charles Digges 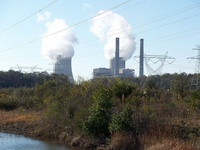 No one, meanwhile, seems to have taken into account the decrepitude of may of the nuclear power stations they intend to shift more of their energy demands to, especially the United States and Russia. For it’s part, the United States is especially alarmed at what it has found when investigating these older plants.

Many nations will be bringing plans that include increased nuclear power use to Copenhagen to describe their methods of cutting climate gasses in the atmosphere, diplomats have told Bellona Web in email interviews.

Bellona is against expanding a role for nuclear power in the fight against global climate change. As described by Bellona executive director and nuclear physicist, Nils Bøhmer, relying more heavily on nuclear power means that less than a decade down the road, the world will be struggling not only with climate change, but with overflowing spent nuclear storage fuel facilities as well.

The UN’s Intergovernmental Panel on Climate Change has recommended nations slash their emissions of greenhouse gasses by at least 20 percent below 1990 by 2020 if the world hopes to achieve only a 2 degree Celsius rise in world temperature, and has warned that anything above that would be catastrophic.

Two years ago, the European Commission surprised the world by endorsing nuclear power as a source of carbon free energy when Mattias Ruette, director general of the commission’s Transport and Energy Department (DG TRAN)  suggested that CO2 energy generation was comprised of three pillars: carbon capture and storage, renewable energy sources, and nuclear power. This was a

UK Prime Minister Gordon Brown has begun an unprecedented nuclear build-out, promising that more and more plants will begin construction by 2014 as part of his country’s efforts to stem global climate change. France – which relies on nuclear for 80 percent of its is backing nuclear expansion efforts by its state run Areva. And Russia, under the same aegis of slashing emissions is building one plant and attempting to garner funding for another.

But nuclear power plants cost billions of dollars to construct, and almost never are prepared by their proposed finishing date.  The UK’s plans fail to take into account that by the time their new reactors are ready to plug into the grid, the IPCC’s stated year of irrevocable climate damage will have already passed.

Add to that the fact that no country in the world has an effective means for safely storing spent nuclear fuel and other radioactive waste for more than 60 years. Even the US project at Yucca Mountain – in which America’s nuclear industry had placed so much hope – proved to be a failure when third party investigations, several billion dollars into the project, determined a high risk of radioactive material into water tables. Funding for continuing the project was all but killed in President Obama’s green stimulus package.

Thus, spent fuel continues to pile up on site, presenting individual plants with difficult choice and worse solutions to handle the overflow.

Because of this, many countries, including the United States and Russia, are looking boost power production at plants, many of which are already well beyond their engineered life spans.

President Obama’s historic stimulus package pointedly included no funding for new nuclear power plants. But Energy Secretary Chu in an interview a month later sought to mollify a Senate panel, in light of the funding zero-out for new nuclear plants and Yucca that the president was far from anti-nuclear. His chief concern, as outlined by Chu, was safe storage for nuclear waste.

America has meantime been looking to its older plants to produce more, but have not been liking what has been uncovered.

Florida Power placed an order to build Crystal River in February, 1967, and it entered commercial service in March, 1977. Progress Energy has applied to extend its license 20 years beyond its initial 40 year engineered lifespan.

The plant had been temporarily shut in late September so workers could replace the aging steam generators — which required them to cut a hole in the dome. The steam generators at many aging nuclear reactors were intended to last the life of the plant, so no way for swapping them out was designed.

About 9 inches into the 42-inch-thick structure, workers discovered a gap that varied from 2 inches down to an eighth of an inch, over a roughly 60-foot wide patch of wall.

“It appears that other similar plants that have gone through the steam generator replacement process have not seen the same phenomenon,” said Roger Hannah, a spokesman for the Nuclear Regulatory Commission, which is conducting a special inspection to find out, among other things, where the gap came from.

One possibility is that it was created when the hole was cut, which would be reassuring because it would imply that the problem does not exist at other plants. Tests at Crystal River have determined that the only place in that dome with the problem is just above the hole cut for the steam generator replacement project, the New York Times reported.

It is also possible that the Crystal River design was more vulnerable than others. All containment domes have steel reinforcement bars, but Crysal River’s  also has steel cables under tension. The crack could be related to workers cutting some of those cables to make the hole, said the paper.

Still, containment buildings like the one at Crystal River are intended to withstand pressures in the neighborhood of 50 pounds per square inch in case of a catastrophic accident. The Crystal River plant has not had such an accident, however, and exactly how much strength the Crystal River building lost as a result of the gap is unknown.

Three mile Island
Just this past Saturday, radioactive dust unexpectedly blew out of a pipe being cut by workers during weekend maintenance at the Three Mile Island nuclear power plant in Pennsylvania – the site of the United State’s worst nuclear accident.

Experts are still puzzling over what caused the incident inside the shut-down Unit 1 of the plant, and 150 workers who had been trying to repair the damages were sent home on Monday after an airborne radiological contamination alarm sounded inside the reactor building.

The accident happened at about 4:15 p.m. Saturday during the repairs. A radiation monitor at an entrance to the reactor building "temporarily went up" slightly, but a later survey detected no contamination outside, plant spokesman Ralph DeSantis told the Associated Press.

No radioactivity escaped the building, said DeSantis said, and exposure to the workers as minimal – the equvalent of two x-rays per year, Nuclear Energy International Reported.

The plant, which is on a Susquehanna River island about 16 kilometres south of Harrisburg,Pennsylvania has two reactors. One suffered a partial meltdown in 1979 and remains mothballed, constituting America’s first brush with near nuclear disater. The other reactor, owned by Chicago-based Exelon Corp., is still in use, but has been shut down since last month so steam generators could be replaced.

The US Nuclear Regulatory Commission is monitoring the plant’s handling of the event, said AP. Agency spokeswoman Diane Screnci said it is not unusual for a small release of radiation to occur while a plant is refueling or replacing its generators.

Eric Epstein, chairman of the watchdog group TMI-Alert, said in a statement that it is troubling that the plant would send workers back into the reactor building before identifying the root cause of the contamination.

Edwin Lyman, a senior staff scientist at the Cambridge, Mass.-based Union of Concerned Scientists, said it is too early to tell whether the accident is the result of negligence.

In a statement Monday, Three Mile Island vice president Bill Noll said that things are back to normal and that Exelon is back performing outage activities as originally planned."