A Russian activist arrested and convicted of disturbing the peace at a public hearing on the environmental impact of a Belarusian nuclear power plant that is planned for construction was released from jail Friday after serving a seven-day sentence, his colleagues told Bellona Web.

Published on October 15, 2009 by Charles Digges 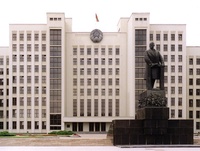 Andrei Ozharovsky, a nuclear physicist and activist with the Russian environmental group Ecodefence, as well as a frequent contributor to Bellona Web, had been arrested last Friday at the hearing in the Belarusian town of Ostrovets in the Grodno Region.

He had been distributing a report at the hearing that he and a group of other physicists from Russia and Belarus had authored, entitled “Critical Notes on the State Environmental Impact Study for the Belarus Nuclear Power Plant.”

The report included conclusions that the building of the plant was unnecessary and untenable.

Rosatom, Russia’s state nuclear corporation, has an enormous stake in building to the plant for it’s former Soviet republic neighbour, and Ecodefece’s co-chairman Vladimir Slivyak said in a statement that he sensed the hand of Rosatom behind Ozharovsky’s arrest.

“It is entirely possible that Rosatom – which is intending to build the plant – is standing behind the actions of the Belarusian authorities,” he said.

Calls to Rosatom by Bellona Web for comment on this went unanswered.

“The fear of the Belarusian authories before well-founded criticism of the nuclear power plant  turned out to be so great that they decided to arrest  (Ozharovsky) on trumped-up charges,” continued Slivyak.

“To detain a specialist who came to appear at a public hearing is a travesty of justice. This is apparently a warning to the anti-nuclear movement – further things will just be worse.”

Ozarovsky was taken to a local police precinct when he exited the hearing to get more copies of his report. Upon trying to re-enter, he was stopped by police and a representative of the company that is building the nuclear power plant. Police confiscated 96 copies of his report.

Later that day, the Ostrovets Regional court found him guilty of disturbing the peace for distributing and sentences him to seven days in jail. During that time, every lawyer he and his colleagues tried to contact refused to take his case.

A lawyer in Minsk who was contacted by representatives of the Ostrovets court said he would not take the case and refused under any circumstances to say why, contacts of Ozharovsky told Bellona Web.

Ozharovsky ended up having to write his own appeal to the court. After it was submitted he did receive a visit from a public defender, but whether he lawyer was able to aid Ozharvosky in anyway is presently unclear.

Russia’s Foreign Ministry was similarly unhelpful when they sent, at Bellona’s behest, a communiqué to the Belarusian government asking half-heartedly for the details of Ozharovsky’s arrest.

Bellona and other rights and environmental groups appealed to Russian foreign minister Sergei Lavrov to offer consular assistance to Ozharovsky, but none was forthcoming.