MOSCOW – A wave of anti-nuclear protests spelled a tepid welcome to Russian Prime Minister Vladimir Putin during his visit to Turkey in early August. Russia’s intention to sell a nuclear power plant to Turkey at half the price does not sit well with the local population. Bellona’s regular contributor offers a comment on the event.

Published on August 13, 2009 by Andrey Ozharovsky, translated by Maria Kaminskaya

After a memorable meeting with nuclear workers in the Central Russian town of Udomlya, the site of Kalinin Nuclear Power Plant, where he pledged his support to the development of the peaceful atom at home, Prime Minister Putin has made another move inviting the temptation to cast him as a new faithful lobbyist of atomic energy – this time, abroad.

During his visit to Turkey on August 6 this year, Putin again was advertising harmful nuclear technologies and even announced an extravagant low-balling move – a promise to build a nuclear power plant in Turkey for only half of what such sites usually go for. Russia’s premier did not delve into specifics on the numbers, but experts are mentioning a $5 bn to $6bn price-tag per one reactor of a design capacity of 1 to 1.2 gigawatt, dismantling costs not included.

“The offer we are making today is twice as cheap as analogous projects [on offer] in the United States. So [it is] quite competitive,” Putin said in Ankara. It seems appropriate to conclude the competitiveness of Russian nuclear energy technologies may be rooted not so much in their quality or reliability as in the extremely low prices, a policy kept viable by the vigorous support the Russian nuclear industry receives from the state.

It is precisely through export credits that financing is made available for nuclear power plant projects developed by the Russian state nuclear corporation Rosatom in India, China, and Iran. The same is now being offered to Turkey.

NPP tender draws only bidder
The new nuclear power plant (NPP) was suggested for a town of Akkuyu, located on the Turkish coast of the Mediterranean Sea north of Cyprus. Incidentally, plans to build a nuclear power plant at the site floated about a decade ago, but were unexpectedly cancelled in 2000 by then-Prime Minister Bulent Ecevit, who was quoted in media reports as saying at the time: “It is unnecessary for us, for the time being, to invest in nuclear energy.”

Ecevit emphasized, according to reports, that Turkey would focus on energy conservation and invest in natural gas, hydro-electricity, as well as solar and wind generation. The NPP project was provisionally reinstated in 2006, however. According to the Turkish press, another bidding date for the Akkuyu plant was set in March 2008 by the Turkish Electricity Trading and Contracting Company (TETAŞ), which slated tender proceedings to be held in the following September.

However, a number of issues yet to be settled still impede the conclusion of the tender, among which are construction costs and wholesale electric power prices projected for when the plant goes online.

In contrast to the previous bidding held in 1997, Western companies did not participate in the tender this time and the only bidder was a consortium comprising Turkey’s Park Teknik and Russia’s Atomstroiexport and Inter RAOUES. Atomstroiexport is Rosatom’s entity responsible for carrying out intergovernmental cooperation agreements and Inter RAO UES, formerly RAO UES of Russia, is an electric power trader on both the domestic and foreign markets and a leading exporter and importer of electric power in Russia.

Last May, Turkey’s nuclear authority accepted the consortium’s offer, which envisions four reactors, each with a capacity of 1,200 megawatt. Terms of agreement include the expectation that funding, as well as construction and operation of the new site, will be provided by the Russian supplier, while Turkey will be responsible for licensing and electric power purchase guarantees for the next fifteen years.

The offer had been developed within Rosatom’s AES-2006 project (AES in Russian stands for Nuclear Power Plant). According to Rosatom’s official description of the project, AES-2006 (VVER-1200) “…is a design of a standardized Russian nuclear power plant of Generation III+ featuring improved technical and economic performance characteristics. The goal is to attain up-to-date safety and reliability characteristics with the optimisation of construction costs. The design is based on VVER reactor with at least 1,150 megawatt and the possibility of upgrading to 1,200 megawatt. Design capacity factor is 92% and refuelling interval up to 24 months.”

Two nuclear power plants are currently being designed with VVER-1200 reactors: second stages of construction for the sites in Novovoronezh, in Central European Russia, and at Leningrad NPP, near St. Petersburg. 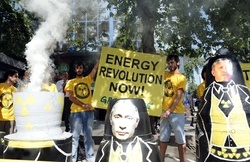 The protests
Buying a nuclear power plant at half price is not something that Turkish citizens seem wholly enthusiastic about. A number of anti-nuclear demonstrations took place during Putin’s visit to Ankara. A Greenpeace rally organized in the Turkish capital featured two “nuclear” nesting dolls – the famous Russian matryoshkas – made out to look like Putin and Turkey’s premier Recep Tayyip Erdoğan. Reports said that armed police were brought to the scene and used unwarranted force to disperse the protesters. Two activists were detained and released later with no charges brought against them.

Korol Diker, Greenpeace Mediterranean’s climate and energy coordinator and one of the protest’s organisers, made the following scathing comment for Bellona Web: “Putin came to Turkey to peddle a dirty, expensive, and obsolete nuclear technology. And for energy as futureless as this the people of Turkey will have to pay a price of between $50 billion and $75 billion. To agree to such a deal is unacceptable.”

“Countries that are part of the nuclear lobby, when they claim that nuclear energy is ‘clean and safe,’ are simply lying,” Diker went on. “Yes, nuclear energy has been proven with tests, and the result was Chernobyl. Turkey, as one of the countries that still suffer from its consequences, will not let Putin or Erdoğan expose future generations to nuclear risks!”

Despite the vigorous protests, Putin’s visit still resulted in a cooperation agreement binding the two countries in collaborative development of civilian atomic energy. An intergovernmental agreement was also signed on establishing an immediate notification system and information exchange for communication on issues of nuclear accidents.