MURMANSK – A majority of 71 percent of Murmansk Region residents in Russia’s far Northwest spoke out against the use of floating nuclear power plants in the development of the oil boom expected in the Shtokman field under the Barents Sea off Russia’s Arctic Coast, a poll has found.

Published on March 5, 2008 by Anna Kireeva, translated by Charles Digges

It is the second resounding anti-nuclear poll conducted by the Romir polling agency at the request of Bellona-Murmansk and other Russian environmental organisations in the area in less than a month.

Much interest in using Russia’s promised floating and submerged nuclear power stations was recently expressed at a Russian-Norwegian oil and gas conference held in the Russian enclave of Kaliningrad in January. As Norway’s Statoil will be among the participants in tapping the Shtokman field, thought to be on of the world’s largest untapped reserves, environmental concern over that the atomic suggestion is gaining international support is on the rise.

Russia’s oil and gas giant Gazprom, which controls the leasing rights to the Shtokman field and chooses which foreign partners to include, said at the same January conference that it is receptive to using Russian produced floating nuclear power plants to work the field – so long as it has a foreign partner to bear a portion of the cost. 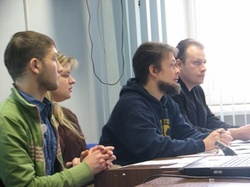 At a press conference hosted Tuesday by Bellona-Murmansk with the participation of other Russian environmental groups Nature and Youth and Ecodefence, environmentalists revealed the results of the poll, and sent an appeal to companies slated to work the Shtokman reserve to reject using floating nuclear power stations.

“Bellona is against the construction of floating nuclear power plants and warns that such installations could heighten the risk of radioactive contamination of the sea and shore zones, specifically the Russian Arctic, by many times,” Andrei Ponomarenko, coordinator for Bellona-Murmansk’s radiation and nuclear safety projects told reporters.

The greatest dangers in floating nuclear power plants are the possibility of accidents leading to radioactive releases, nuclear proliferation dangers, and the absence of any infrastructure for both servicing such plants and dealing with the consequences of accidents.

Public opinion
“Protests against the project have already occurred in the Murmansk and Arkangelsk Regions,” said Vitaly Servetnik, chairman of Nature and Youth.

As results compiled by the Romir polling agency indicate, the overwhelming majority of Murmansk Region residents share the concerns of environmentalists. A full 71 percent of respondents ticked “strongly negative” to the poll question: “What is your attitude toward the use by Gazprom of floating nuclear power plants in the development of the Shtokman gas and oil field?”

“We think that public opinion and the opinion of ecological organisations must be heard by the participants in the (Shtokman) project. For instance, the day after our organisation informed the Siberian Ural Aluminum Company about the risks associated with building a second nuclear power plant (this one a floating plant) in the area to produce energy for a second aluminum plant, a member of their board of directors got in touch with us,” Servetnik told Bellona Web.

After speaking with Nature and Youth, the aluminum company no longer wanted new nuclear power.

“This shows that business can seriously evaluate risks, and the opinion of the public and ecological organisations. We hope the same will be repeated here,” said Servetnik.

Ecodefence Project Coordinator Andrei Ozharovsky told reporters that the idea of putting a nuclear reactor on a barge was not new. In the 1960s, said Ozharovksy, the US Department of Defence (DOD) tried floating nuclear power stations to supply energy to naval bases, but gave up on the idea as too dangerous and building the service infrastructure too costly.

A US DOD spokesman reached by Bellona Web confirmed that the floating nuclear power plant idea had indeed been considered and scrapped.

“The idea of using floating nuclear power plants proved its invalidity in other countries,” said Ozharovsky in an interview with Bellona Web. “It’s strange that Russia returns to such dangerous projects especially when trying to realise such complex and major international projects like drilling the Shtokman field.”