On the World Environment Day, NGOs from Russia, the United States, Finland and Norway, expressed their vision of the issues to be discussed at the G8 summit in St. Petersburg in the middle of July. 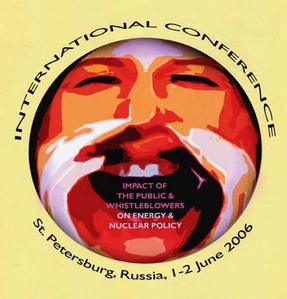 Representatives of 31 non-governmental organizations from 4 countries convened in St. Petersburg on June 1-2 for the conference on the ‘Impact of the Public and Whistleblowers on Energy and Nuclear Policy’. NGOs adopted a joint resolution on the issues to be addressed at the G8 summit.

‘The so-called nuclear renaissance is very dangerous for the whole world’, said Susan Gordon of the US-based Alliance for Nuclear Accountability. ‘Nuclear power plants radioactive waste will remain dangerous for thousands of years. We cannot speed up the nuclear disintegration process for these materials, so nuclear energy is too dangerous’.

‘We think that whenever we speak about energy safety, we should take into consideration the environmental side of this safety’, said Jay Goghlan (Nuclear Watch of New Mexico, USA).

‘Both in Chernobyl and before the Challenger accident there were people who spoke about the work failures. The problem is that no one would listen to them’, said Jay Goghlan (Nuclear Watch of New Mexico, USA).

Sergey Paschenko, Director of Siberian Scientists for Global Responsibility Organization (Novosibirsk) told us about the samples he had taken two days ago, right after the conference, in the village of Lebyazhye (Leningrad region), 20 km away from Leningrad Nuclear Power Plant. In samples taken at the old pipeline abandoned and buried 20 years ago, he managed to register the level of radiation 20 times higher than the normal beta-radiation level, the former supposedly caused by strontium.

‘More detailed research results will be available in a week. We should look for the source of contamination. Local authorities consider the source to be the heptyl mines where, apart from heptyl, radioactive waste was illegally disposed‘, he said.

We, the participants of the international conference on the “Impact of the Public and Whistleblowers on Energy and Nuclear Policy” representing 31 non-governmental organizations from 26 towns and cities and 4 countries, have convened on June 1-2, 2006 in St. Petersburg, Russia.

As scientists, nuclear industry workers, and environmental activists we support people who have unique information about the safety and health issues as potential messengers for protecting human health and the environment. These messengers should be protected and celebrated, not prosecuted or persecuted.

World leaders will come to St. Petersburg to discuss energy problems and solutions, and are actively considering the renaissance of nuclear power. Any consideration of nuclear power cannot take place without recognizing the victims and lessons of Chernobyl and other nuclear disasters and the legacy of nuclear weapons production. The global nuclear energy partnership proposal increases proliferation, endangers the public, and undermines democratic principles.

In addition, we support the right to speak the truth and urge the following: