Norilsk Nickel head Vladimir Potanin announced plans to spend $17 billion in the company’s modernization during a meeting with President Vladimir Putin last week, about a quarter of which will go toward environmental improvement, by 2023.

Published on February 7, 2017 by Charles Digges 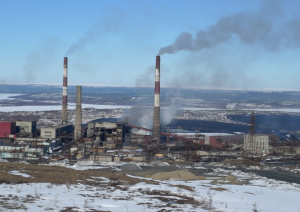 The smelting plant of the KMMC emitting sulfur dioxide pollution into the atmosphere. Courtesy of Thomas Nilsen/The Barents Observer

Norilsk Nickel head Vladimir Potanin announced plans to spend $17 billion in the company’s modernization during a meeting with President Vladimir Putin last week, about a quarter of which will go toward environmental improvement, by 2023.

The money would add up to a giant slash in sulfur dioxide emissions from the Kola Mining and Metallurgy Company that have been wafting in the hundreds of thousands of tons across the Norwegian border since before the fall of the Soviet Union.

In the meeting, which was described on the Kremlin website, Potanin reiterated promises that the company would slash emissions of sulfur dioxide by 75 percent from its Norilsk facilities in northern Siberia, and by 90 percent at its daughter Kola Mining and Metallurgy Company near Murmansk.

A spokeswomen for the company speaking with the Russian edition of Forbes later gave context to those cuts for the first time since these emissions slashing figures emerged: They would be reckoned against a baseline year of 2015. 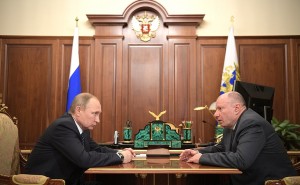 So, how significant would the proposed cuts be for Northwest Russia and Northern Norway?

Sulfur dioxide emissions from the Kola plants – once called Soviet Death Clouds, by the Norwegian environmental movement ­– have fallen since their Cold War peak of about a half a million tons a year.

Yet, anger from Norwegians most impacted by the pollution has grown more dramatic, and they have focused their frustration not only on Russia’s turgid and obfuscating bureaucracy as well as on Oslo and its reluctance to engage its unpredictable neighbor.

Former Sør Varanger mayor, Cecile Hansen, became something of a folk hero for reporting the KMMC to the Norwegian police and filing suit against the company in 2013. The effort failed, but the challenge to Oslo’s foot-dragging was emblematic.

Tensions swelled again last summer when restive rural officials in the North implied it was time to go over Oslo’s head. Mayors and environmentalists rattled the idea of guilting the annual meeting of billionaires and corporate titans in Davos to drop personal sanctions and travel restrictions on Norilsk Nickel executives. One official even suggested seizing the extravagant yacht that Potanin docks in Europe.

It came to nothing, but the grassroots vexation rose with pollution levels. Leading up to 2014, sulfur dioxide emissions hovered at around 150,000 tons a year before hiccupping up to 155,00 tons according to the KMMC itself.

A 90 percent slash in these figures by 2023 using the more polluted year of 2015 as a baseline would be impressive.

Teasing out the specifics of how this drop to about 15,000 tons of sulfur dioxide a year would be achieved is, as usual, a matter of guesswork. But Potanin’s focus with Putin on sweeping modernization to achieve higher output offers necessary clues.

Environmentalists have for years pleaded for the KMMC revamp with so-called Best Available Technologies, and update facilities that were built as long ago as World War II.

Potanin has also said on a number of occasions that the nickel factory in the aptly named Kola Peninsula industrial town of Nikel might just be shuttered and production moved to Norilsk, thus moving the pollution away.

That would kill a lot of local jobs. Nikel has been a company town since 1940. It’s also been choking on sulfur dioxide pollution since then and seen a plague of respiratory illnesses and early deaths. But simply resituating the toxic contamination would to little for Russia’s environment.

It remains to be seen which option Potanin will chose, and that choice will be dictated by whatever rough waters dished out by Russia’s miserable economy throw his way.

But for now, it seems likely that the billions of dollars the company plans to spend will quell local rebellions in northern Norway over the next seven years. Oslo can apparently rest easy for now.