Shipping conglomerate Maersk said on Monday it was striving to improve workers’ rights at shipbreaking yards it uses in India after criticisms of hazardous conditions were leveled at it in the Danish Media.

Published on October 20, 2016 by Charles Digges 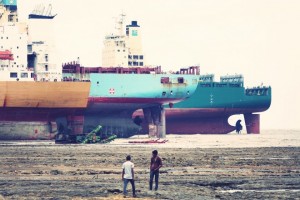 Shipping conglomerate Maersk said on Monday it was striving to improve workers’ rights at shipbreaking yards it uses in India after criticisms of hazardous conditions were leveled at it in the Danish Media.

The Danish shipping giant was accused of scrapping ships on the coasts of Bangladesh and India, a practice the company had earlier condemned, reported Danish media Sunday, piggy-backing on a report release by investigative journalists working with Danwatch.

The report inspired dissatisfaction from Maersk investors as well, many of who demanded shifts in the company’s shipbreaking policies. 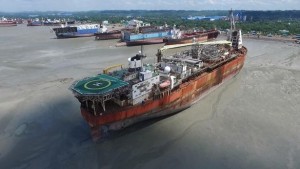 The company expressed regret that a ship it sold this year, the North Sea Producer, had then been taken to a shipbreaking yard in Bangladesh, after Danish media last week showed workers using precarious rope ladders to climb the hull.

The company has promised investors it will no longer sell decommissioned ships to third parties, and that it will deal with unprofitable ships itself from now on, the E24 Norwegian news portal reported.

Following the latest reports, we’ve intensified our dialog with Maersk,” Sasja Berlik, head of responsible investment at Nordea, told the portal. “In our opinion it is a shame that Maersk finds itself in a case sush as this, because we know them, and we know that they can do much better than what we’re seeing today.”

Sigurd Enge, Bellona’s shipping advisor was glad of the backlash from investors.

“Money is a language these shipowners understand, so we hope and believe that this will have an impact and that Mærsk and other Nordic coampanies will now cease such practices,” he said.

Many shipping companies routinely send old ships to shipbreaking yards in India, Bangladesh and Pakistan because they can dismantle container ships as long as three soccer fields – but often at great environmental peril.

Maersk Line, the world’s biggest container shipper, sent two of its vessels for decommissioning this summer to the Shree Ram yard in Alang on India’s west coast.

Lack of employment contracts among the workers and toxic fumes were among findings by the Danish media watchdog Danwatch and two Danish media outlets, TV 2 and Politiken, in a collaborative report documenting conditions for Indian workers at the shipbreaking yard.

“We have established a cooperation with Shree Ram and brought our ships to Shree Ram yard 78, knowing that the standards were not yet at the level of our standards,” Maersk spokesman Simon Mehl Augustesen told Reuters. 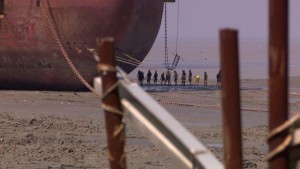 “We consider our active presence in Shree Ram and Alang to improve conditions faster and more effectively, than waiting for our standards to be complied with,” he said.

Further, Maersk promised in a release to the BT Norwegian new portal to develop a new plan for its ship dismantlement procedures.

“When Maersk sells a ship, the value of the sail on the ship is held up to the potential net benefits to scrap it,” the release read. “If the ship is so worn that the potential financial gain is less than 25 percent of the scrap value, Maersk will keep it and take responsibility for the ship being scrapped according to the company’s own guidelines.”

The NGO Shipbreaking Platform remained critical of the conditions at Alang and Shree Ram, suggesting the Maersk’s pledged presence in the shipyards would make little difference.

“The unacceptable conditions in the beaching facility in Alang which Maersk has been praising for its alleged high standards can no longer be ignored,” said Patrizia Heidegger, Executive Director of the Platform.

“Journalists have documented workers without contracts and men endangering their health and lives when exposed to toxic fumes and risks of explosions when torch-cutting in only T-shirts. […]” she said. “The conditions under which the Maersk ships are being broken are even worse than what we expected.”

The shipbreaking business is considered to be one of the world’s most hazardous occupations and highly polluting, according to the International Labour Organization, Reuters reported.

Shipbreaker yards use a method called “beaching”, whereby large ships are propelled forward at high tide, leaving them high and dry at low tide, ready to be cut up. 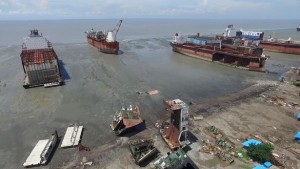 “The working conditions are far more dangerous and less organized in Bangladesh, than in India,” Peter Hasle, a professor at Alborg University in Denmark and a specialist in occupational health and safety, told Reuters.

Maersk told local broadcaster TV2 it was “very, very sorry” that the “North Sea Producer” ended up in Bangladesh after it was sold, to a US company, according to Politiken.

According to Reuters, an average of 1,000 ships are demolished each year globally, and more than 70 percent end up in South Asia, according to the NGO Shipbreaking Platform.