KALUSH, Ukraine – From 2011 to 2014 large amounts of hexachlorobenzene, or HCB – an agricultural fungicide banned since 2004 by the Stockholm Convention – was removed from this contaminated Western Ukrainian city as part of an effort to end its designation as an “environmental disaster zone.”

Published on November 17, 2015 by Tom Heinemann and Morten Hansen 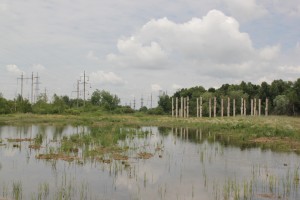 KALUSH, Ukraine – From 2011 to 2014 large amounts of hexachlorobenzene, or HCB – an agricultural fungicide banned since 2004 by the Stockholm Convention – was removed from this contaminated Western Ukrainian city as part of an effort to end its designation as an “environmental disaster zone.”

Various sources are now questioning what really happened in Kalush following a joint 2010 UN-EU scoping mission. After the report came out and huge amounts of money was allocated from Ukrainian authorities, who contracted with private companies to begin the much needed cleanup.

However, new information obtained by Contaminated Future, a “forgotten” dumpsite close to the ones that was investigated by the EU/UN joint mission – reveals a grim story for local residents and for the environment: An estimated 1,600 tons of HCB is buried here:

“The place, which has been forested once had a field and a bush land, and also there were pits which were made with excavators, said Mykhailo Dovbenchuk. “Here they dumped HCB for three straight years, from 1973 to 1976.” 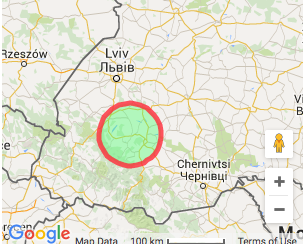 Dovbenchuk knows what he’s talking about. He used to work as a chemist at the factory, Oriana-Halev PLC, which produced HCB. He even participated in the dumping of the extremely hazardous chemical back in the 1970s.

“It’s still there,” said Dovbenchuk, who today heads the local NGO, Green Movement Karparty. “It wasn’t a part of what they removed.”

When Contaminated Future met Dovbenchuk in the outskirts of Kalush he points out how the dumping of HCB took place at two different sites. One is the “official” site called The Polygon:

“They removed the most safe part and they didn’t even looked at the storage from the first three years waste,” Dovbenchuk said. “Today there is a forest on top of this forgotten dumpsite. No one has tried to remove it […]”

Later the “official” waste polygon was established, and after 1976 the HCB waste from the production at Oriana-Halev was dumped more safely. The Polygon consisted of 12 pits with a sealant beneath. Each pit stored barrels of HCB waste.

However, no one seemed to care about the “forgotten” dumpsite located just around 100 meters from the Polygon.

The estimated production of HCB between 1973 to 1976 was annually 540 tons. This means there could be more than 1,600 tons of HCB just next to what the UN/EU report called

one of the most polluted and contaminated spots in Kalush – a spot in “need of urgent attention” according to the report findings.

However the report doesn’t mention anything about the “forgotten” dumpsite.

According to Mr. Dovbenchuk the dumpsite is without any kind of protection.

According to the international organization Environment-People-Law” (EPL), headquartered in Lviv to Kalush’s north, the concentration of the extremely toxic HCB exceeds the norm by half a million times, said EPL environmentalist Alla Voytsikhovska during a press-conference on May 6 2015.

“At the end of March 2015 the EPL went to the hazardous waste landfill in Kalush and took samples of soil and water for further research,” Voytsikhovska said.

The purpose was to challenge what EPL regards as the myths about the environmental status after the cleanup of HCB in Kalush.

According to the laboratory analysis conducted by the Ministry of Health in Ukraine the soil from Kalush had a concentration of HCB exceeding the norm from 164,000 times to as much as 518,000 times the limits allowed by international standards.

Dovbenchuk takes Contaminated Future to the area where HCB was “officially” was dumped in the Polygon some 40 years ago.

“Take a look at the vegetation here. It was planted, it started to sprout, but eventually it died all the same. This means that something is killing it. The soil is bad here,” said Dovbenchuk.

He is also concerned about the private wells that local people get their drinking water from.

“No one can tell you if the underground water currents contains hexachlorobenzene,” said Dovbenchuk. “There is no monitoring of it in the wells from which people take their water. There is no environmental monitoring and control of the ground waters.”

Yuri Sadoviy, head of the Kalush Gallurgy Institute shares this concern – but can’t do much about it.

“The Kalush Gallurgy Institute could provide the monitoring of wells, but the institute doesn’t get any support at all,” said Sadoviy.

Today Sadoviy and two other scientists work voluntarily at the institute.

“Our specialists have been waiting for five years now. But there is no work to do, because we have no money for salaries,” he said.

The institute that once housed numerous scientists and researchers, is more or less abandoned. Several windows are smashed and walls are cracked.

“In Kalush there are still educated and experienced people who could monitor the situation, but we have no funds,” said Sadoviy in what seems to be the institute’s last remaining office, filled as it is with charts, reports and documents.

The NGO, Green Movement Karparty states that private companies have been paid by the UN/EU to remove more HCB than ever produced in Kalush. According to Dovbenchuk, the production of HCB back in the seventies is documented and can lead to accurate calculations about the amount of waste produced.

Something is not adding up

According to the scientific mission conducted by the UN/EU, some 11,700 tons of HCB waste should have been removed from Kalush starting at the summer of 2012 and ending in 2013.

However, an inventory done by Ukraine’s National Institute of Geochemistry of the Environment of the National Academy of Science later confirmed some new and shocking figures: Suddenly the amount of toxic HCB waste was about 29,000 tons.

A part of this is explained by the way the private contractors handled the toxic waste. International standards often use “by the ton” measurements when it comes to calculating a certain amount of waste that has to be removed.

However, the Ukrainian media published several articles implying that there had been fraud with money allocated by the Ukrainian authorities for the cleanup.

According to Ukrainian media, some $159 million were spent.

And in another media report from The Kyiv Post, the private entrepreneurs simply mixed the highly toxic HCB with soil surrounding the rusty barrels and piles of waste.

After the international experts left Kalush in 2010, a money printing machine apparently sprung up.

Twelve thousand tons of the HCB waste from Kalush was transported to Gdansk in Poland.

Here it was stored – but hardly protected on the banks of the Baltic Sea.

Environmentalists and experts were alarmed and the disposal of the HCB waste created a local scandal in 2012.

The transportation was insecure, the storage was risky and the Polish company’s ability to destroy the waste in a safe manner was questioned by different experts and environmental organizations.

The Polish company was later fined € 1.4 million for having kept the HCB-waste outdoors and in partially deteriorated bags with no protection against rain, flooding and wind – only a few meters from the Baltic Sea.

Finn Bro-Rasmussen, professor emeritus and former chairman of the EU Scientific Committee on Toxicology and Ecotoxicology (CSTE) have repeatedly warned about how the HCB-waste was supposed to be treated in Poland.

“The problem is that the incinerator plant in Gdansk is not technical sufficiently developed to deal with such a difficult chemical as HCB – so we risk atmospheric and/or aquatic pollution,” said Bro-Rasmussen. ”They have tried to solve some of the problem by transporting some of the chemical in land but the storage is not good enough and the now [there is a] risk that it will enter the Polish waterways.”

This article is the second in a series that will explore chemical waste in Ukraine. The original version appeared on contaminatedfuture.org, an endeavor by two independent Danish journalists, Tom Heinemann and Morten Hansen, to illuminate the ongoing crisis of obsolete pesticides and other banned industrial and agricultural chemicals buried in Eastern Europe and the Caucasus.