Bellona’s St. Petersburg-based Environmental Rights Center Bellona has gathered Russia’s environmental activists for its 5th annual conference, “The Ecology of Russian Cities/ Public Initiatives” – a three-day powwow to talk over the environmental aspects of urban development that began on September 23 with a panel discussion highlighting St. Petersburg, its planning strategy, experience, and prospects.

Published on September 25, 2015 by Igor Yakovlev, translated by Maria Kaminskaya 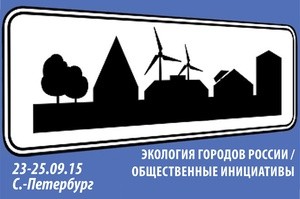 Conference poster for 'The Ecology of Russian Cities/Public Initiatives. (Image:Bellona)

Bellona’s St. Petersburg-based Environmental Rights Center Bellona has gathered Russia’s environmental activists for its 5th annual conference, “The Ecology of Russian Cities/ Public Initiatives” – a three-day powwow to talk over the environmental aspects of urban development that began on September 23 with a panel discussion highlighting St. Petersburg, its planning strategy, experience, and prospects.

Over the three days of discussions, participants – representatives of Russian environmental NGOs and environmental journalists – will share their thoughts, views, and experience with regard to urban planning, waste removal and disposal, urban transport solutions, protection of cities’ historical sites, industrial pollution, problems of cities hosting sites of the nuclear industry, and urban greening and beautification.

A number of sessions will deal with topics related to environmental rights and activism: protection and defense of environmental activists and journalists who find themselves under state pressure or at risk of state persecution, anti-corruption analysis of legislation and litigation involving violations of environmental rights, environmental education and information, popularization of green ideas, and green public initiatives in Russian cities.

The conference started with a panel discussion of urban planning issues, with St. Petersburg, its ecological problems and experience, in particular focus. This second largest Russian city and the Russian Empire’s capital, which has survived three revolutions and three renamings – into Petrograd, then Leningrad, then back to the original name – carries an incredibly rich historical, cultural, and architectural legacy (as well as one of a major industrial center), which the city has to protect while accommodating the economic and environmental demands and opportunities of the future.

The discussion was opened by Mikhail Amosov, St. Petersburg’s politician with the liberal Yabloko party, who spoke of city planning as one of the essential prerequisites for solving urban ecological problems. This, of course, was the aspect that most interested the conference’s participants.

One attempt to create a unified planning and development model for St. Petersburg and the adjacent areas of Leningrad Region – the two, though being parts of a living whole, a system with undeniable close links, are formally two distinct constituents of the federation – was made in a conceptual metropolitan development strategy called “The Big St. Petersburg. XXI century.” Work on this concept was led by Grigory Yavlinsky, head of Yabloko’s faction in St. Petersburg’s Federal Assembly.

Amosov spoke in detail about the history of St. Petersburg’s master layout plans that, since the city was founded in 1703, have added up to 18, or maybe 19. He also spoke of the city planning experience of such major cities as Copenhagen, Stockholm, and Shanghai – cities whose examples St. Petersburg, in Amosov’s view, could take into consideration.

Nature reserves – can’t have too many of those

St. Petersburg started creating what is called “specially protected nature conservation areas” on its territory in the early 1990s. Among others, these are the natural monuments Strelninsky Bereg and Komarovsky Bereg – both strips of shoreline area on the coast of the Gulf of Finland near the settlements Strelna and Komarovo – and the Yuntolovo Reserve. Today, protected natural areas constitute five percent of the city territory. Amosov called this a “wonderful” fact.

This was an assessment Alexander Karpov, head of the St. Petersburg environmental expert appraisals center EKOM, strongly disagreed with. According to Karpov, five percent is an abysmally small percentage. Even in Moscow, Russia’s largest and heavily urbanized metropolis, the total span of protected natural areas is several times as large.

The expert gave the example of London, where some 1,400 natural areas have the status of specially protected sites. These, as a rule, are not very large – between 0.5 and 10 hectares – but together they “create a living ecological network” that helps nature survive in a giant urban hub.

In Karpov’s opinion, conservation areas should not be viewed as “nature’s sancta sanctorum” – closed off to the uninitiated strangers. On the contrary, they must perform the function of environmental education and awareness.

Parks people could go to – and new tourist attractions

“Forget the accessibility of nature conservation areas – even city parks in St. Petersburg become a no-go zone at dusk,” Yevgeniya Kolesova, head of “The Big St. Petersburg” project development team, said in her speech during the panel discussion.

The strategy offers proposals on how this situation could be rectified without harming the nature: installing lighting and benches for the visitors, laying strolling paths.

“One needn’t make a ‘mall on a tour’ out of a park to achieve that – something that, for example, Gorky Park in Moscow has been turned into,” said Kolesova.

Other proposals in the strategy include development of new tourist attractions. The potential both the city and the region around it offer in this regard is huge – but only a mere fraction of it is in fact used. Such are, for instance, St. Petersburg’s embankments, which today serve more as thruways for the city’s busy traffic, or the “gray belt” of the industrial premises of Russia’s oldest shipbuilding enterprise, which is just a year younger than the city itself: Admiralty Shipyard.

Kolesova believes that by combining its industrial past with modern architecture, this district could become a true landmark of a XXI century St. Petersburg.

Closing the discussion, Karpov called on his colleagues to formulate more ambitious environmental objectives – but also do it in a language that the bureaucracy and business can understand.

“We always talk about conserving, saving, we say, don’t touch this, don’t go there… Wrong! We must talk about developing, building up nature’s capital, its growth – and talk about it in the same terms that colleagues from the economic and social sectors use,” Kaprov said.

This is the kind of talk that helps the two sides find a common ground.