Vis menyen
Bellona.org > Latest News > Industrial Pollution > A tale of how the West is polluting Murmansk: a day in the life of a ‘foreign agent’

A tale of how the West is polluting Murmansk: a day in the life of a ‘foreign agent’

MURMANSK – How to state environmentalists explain the complex environmental conditions of the Murmansk region while ignoring a spike in harmful emissions from Russian industry? Right. Blame the west. It’s all the rage. And, of course, much easier. 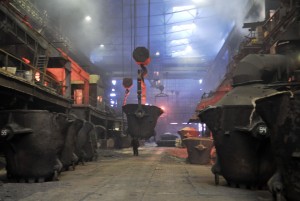 MURMANSK – How do state environmentalists explain the complex environmental conditions of the Murmansk region while ignoring a spike in harmful emissions from Russian industry? Right. Blame the West. It’s all the rage. And, of course, much easier.

Murmansk yesterday held a roundtable discussion called “the evaluation of Murmansk’s environment: Different points of view.” Participants in the discussion, arranged by state newspaper Rossiiskaya Gazeta, included state ecologists and regulatory agencies. Representatives came from the Murmansk wing of the Ministry of Natural Resources and Ecology, the Murmansk administration, and Rosprirodnadzor (Russia’s environmental oversight agency) and the environmental prosecutors’ office.

Scientist also flocked from the Institute of Industrial Ecology at the Kola Center for the Russian Academy of Sciences. Representatives of the Kola Mining and Metallurgy Company (KMMC) – a daughter enterprise of Norisk Nickel – and Olkon also attended.

The only environmental NGO invited was Bellona Murmansk, which, according to Russia’s Justice Ministry, has since late March been fulfilling the role of a “foreign Agent.” And I was alone in representing my organization.

What was immediately surprising was that none of State the ecologists said word one relating directly to the Murmansk Region’s environment. Instead, a lot was said about environmental organizations, which, “working off foreign financing,” are eternally dissatisfied about harmful polluting emissions. And about the fact that – according to state environmentalists – the bulk of that pollution is from western countries.

Instead of factors influencing the environment above the Arctic Circle at current, Vladimir Khrutsky, deputy minister for natural resources in the Murmansk Region, preferred to speak of the area’s well-meaning industrial polluters. He offered long-winded praise for their environmental work, and lamented that they pay big bucks for the negative affects they have on the environment. He said that towns have grown up around the industries and that they are the biggest taxpayers to the regional budget. Apparently, the bureaucrat was giving us all to understand that the Ministry and Rosprirodnadzor have no ax to grind with the polluters.

“We don’t have any unresolvable conflicts. We’ve led the companies to respect us,” Khrutsky concluded in his panegyric speech. All’s well, and so we’ll write it so. Polluters respect the Ministry of Natural Resources and Ecology. How comforting.

In Khrutsky’a version (pardon me, the deputy minister for the region’s environment), the biggest regional polluters are … drum roll, please … other countries’ emissions that alight in the Murmansk Region from the direction of European countries, specifically Norway.

But you’re not actually thinking that the bureaucrat troubled himself with naming even one pollutant, are you? Or any responsible foreign industry? Or that he produced a shred of scientific evidence confirming this controversial point? Come now… just think of all the righteous anger a statement like this would spark.

Representing Bellona Murmansk, which for the past couple dozen years has engaged with the environmental problems of the region, I was, mildly put, surprised. Such positive words for local industry, the guys who’ve brought the environmental devastation. And who won’t even allow themselves to agree that dialogue among the authorities, industry and the public is good.

For this, Bellona Murmansk has been declared the enemy.

“You’re only interested in criticism. Not constructive criticism, but pure criticism! And why even talk to you, you are foreign agents, you work for foreign cash?” continued Khrutsky, practically unable to contain his spittle. We were at the moment discussing opportunities to develop conversation among the authorities, industry and the public

A lyrical digression: If environmental NGOs get foreign funding and organize events with the participation of government representatives, this is now called “political activity.” And this is unfit for “dialogue.”

Especially confounding is that Bellona Murmansk wasn’t just stripped of its role as a Russian environmental organization. We were also made to answer before this honest gathering for the entirety of the Norwegian mining industry.

For some reason, Bellona, particularly, was singled out to explain emissions from Norwegian industry, natural conservancy law, and the various environmental problems of surrounding countries.

One inquiry from those organized was about the activities of an ore mining company in the Norwegian province of Finnmark, where one company is burying its waste in fjords. Yet none of the organizers knew the name of the company they were discussing. At that, if you’re discussing polluting Norwegian fjords, it’s worth noting that Bellona Murmansk, like many other Russian and Norwegian environmental groups, have already turned to Norwegian authorities with the demand they halt such activities.

But I have never heard of a situation in which Murmansk’s Environmental Ministry, having successfully dealt with all the Region’s environmental issues, and as such can now fret about the condition of Norwegian fjords, have taken it upon themselves to make similar inquires of their own. For instance, the authorities and simple folk of Northern Norway are extremely concerned about sulfur dioxide emissions along the Norwegian-Russian border – and it seems a times that only the Norwegians worry about this – are trying to address the issue as they can.

They conduct joint seminars, conversations, create working groups and inter-agency committees, and offer financial help to solve the problem. A couple of years ago, the mayor of Sør-Varanger even threatened to sue the Kola Mining and Metallurgy Company for its environmental impact on the border zone. But the Murmansk Region’s environmental bureaucrats, who ring their hands so helplessly over the condition of Norwegian waterways, couldn’t name one thing they were doing to better the situation. They prefer to offer wholesale criticism of unknown foreign industry when they stand in front of TV cameras, and to blame Russian environmental organizations for everything.

The roundtable discussion more adequately resembled an argument between the Kola Mining and Metallurgy Company and Bellona Murmansk.

The speeches circled, as always, around rising levels of sulfur dioxide. Now the company is conducting its own investigation of a recent incident when at the beginning of April, the acceptable norm for emissions was exceeded by 12 times in the Kola Mining and Metallurgy Company town of Nikel – and exceeded norms by six times on the proceeding day. Rosprirodnadzor, naturally, is leading the investigation.

And company representatives again talked about how each year the volume of emissions steadily declines, and how they don’t quite understand Bellona Murmansk’s dissatisfaction with the slow tempo of these reductions – while the volume of emissions remains large. Further, according to the Kola Mining and Metallurgy Company, it’s incorrect to compare sulfur dioxide emissions with the entire emissions of Norway.

The gathering ended with a big cheer for Murmansk area industry, and what a bunch of great folks they are. But, of course, there are those incidents of pollution spikes owing to poor weather conditions, but on the whole, according to the state ecologists, everything’s a-okay. It’s Norwegian industry that is the headache for the Murmansk Region, and as far as environmentalists and the public go…well what can you expect from foreign agents?

An earlier version of this blog by Anna Kireeva appeared on the site of Echo of Moscow radio in Russian.