MURMANSK – The highly placed bureaucrats in the federal division of Russia’s Federal Service for Supervision of Natural Resource Usage and two from the agency’s regional divisions have been arrested on charges of allegedly taking bribes – a scheme in which Russian press agencies say they were caught red handed.

Published on January 22, 2015 by Charles Digges 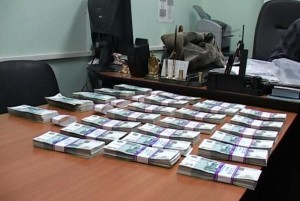 MURMANSK – A highly placed official in the national division of Russia’s Federal Service for Supervision of Natural Resource Usage, and two from the agency’s regional divisions have been arrested on charges of allegedly taking bribes – a scheme in which Russian press agencies say they were caught red-handed.

The sweep comes at a time when the Russian government is considering the creation of a blacklist of officials who have been dismissed from their posts over so called “loss of trust” due to corrupt activities.

Authorities said Wednesday they arrested Vyacheslav Spitsyn, the service’s deputy chief for environmental regulation and permits for accepting bribes. The Federal Service for Supervision of Natural Resource Usage is commonly referred to by its Russian acronym Rosprirodnadzor.

The Russian news portal Lifenews.ru reported members of Russia’s Federal Security Service, or FSB, swooped on Spitsyn in his office at the moment he was accepting a bribe of over 1million rubles ($15,000) from an unnamed manager of Russian state oil pipeline monopoly Transneft. The agency said Spitsyn attempted to throw a bag containing the alleged bribe money out of a window.

At nearly the same time, police arrested another Rosprirodnadzor official in Krasnodar, for taking some 200,000 rubles ($3,000) in bribes. Natalya Smyatskaya, deputy head of the regional office of criminal investigation told the Yugopolis.ru news portal (in Russian).

The official is said to have offered to overlook an environmental breach for the bribe plus protection for the management of the company he was inspecting. The management informed the criminal investigations office, the portal quoted Smyatskaya as saying.

The suspect was detained by the FSB, the portal reported, and whether or not he will be formally arrested is still in question. The suspect’s name has not been published.

Ruslan Tischenko, director of the Murmansk Region’s branch of Rosprirodnadzor was detained while allegedly receiving a bribe of 1.5 million ($23,000) supposedly in exchange for declaring false a report on emissions and waste from the Apatit firm, which recovers the phosphate mineral apatite, RIA Novosti reported, citing sources Russia’s Investigative Committee – akin to the US Federal Bureau of Investigation. The agency quoted Tatyana Kovalyova, the head of the investigations department of the Murmansk division of the Investigative Committee as saying Tischenko is suspected of accepting especially large bribes.

According to an accounting on the Russian news portal bezformata.ru, Tischenko on December 26 was allegedly aware that Apatit’s data on its emissions were unreliable. So, in exchange for the 1.5 million rubles, he approved the company to pollute and produce waste at maximum permissible levels.

Tischenko was official accused of the crime and is awaiting trial in a remand jail. The investigation against him continues.

Andrei Zolotkov, director of Bellona Murmansk, said he wasn’t surprised by the sweeps against Rosprirodnadzor: It is precisely this agency that oversees the activities of the heaviest and most profitable industries in the region – which are also the area’s most egregious polluters – making the agency especially vulnerable to corruption.

“Let’s take the situation of air pollution at industrial sites of the Kola Mining and Chemical Combine [a daughter firm of the giant Noriilsk Nikel] in [the Murmansk Regional industrial cities of] Zapolyarny and Nikel,” said Zolotkov. “The Murmansk Hydro-meteorological Center regularly registers concentrations of sulfur dioxide higher than allowable norms, while Rosprirodnadzor […] can’t ever find anything” wrong with the air.

“So why can’t we assume, in this case, that so called checks are actually an imitation of zealous activity and, among other things, contain an element of corruption?” Zolotkov continued.

In 2013, the Murmansk division of Rosprirodnadzor together with the local prosecutor conducted an unannounced inspection of the KMMC because of a complaint filed by the Green Alliance People’s Party political movement, headed by former Rosprirodnadzor head Oleg Mitvol, who is now one of the agency’s most virulent critics. Despite findings by the Murmansk Hydro-meteorological Center that determined the KMCC has violated sulfur dioxide emissions norms during every day of Rosprirodnadzor’s inspection, Rosprirodnadzor nonetheless announced that independent laboratory analyses on the outskirts of the KMCC’s industrial cities registered no pollution spikes.

In 2014, Rosprirodnadzor conducted an announced inspection of the KMCC and, again, found no emissions of sulfur dioxide exceeding permitted norms. However, another Russian federal Agency, the Federal Service for Hydrometeorology and Environmental Monitoring, known and Girdromet, registered emissions above permissible norms on each day of the Rosprirodnadzor inspection.

Mitvol told the Lifenews.ru agency that he’s not surprised that so many officials from Rosprirodnadzor are now facing bribery charges.

“The previous leadership [of Rosprirodnadzor] created a situation in which these don’t represent the first bureaucrats arrested in their personal offices while taking bribes,” he told the portal.