The Bellona Foundation believes that that there is a need for a common regulation of both new and existing chemicals and that the Registration, Evaluation, and Authorisation of Chemicals (REACH) is an important instrument for phasing-out and replacing harmful substances

Summary
The Bellona Foundation believes that that there is a need for a common regulation of both new and existing chemicals and that the Registration, Evaluation, and Authorisation of Chemicals (REACH) is an important instrument for phasing-out and replacing harmful substances. However, a harmonisation of chemical legislation should also include intermediate level subtances and radioactive substances. The Bellona Foundation suggests that a plan be developed for the inclusion of radioactive substances, which should take place within five years from the start of the REACH registration.

The Bellona Foundation believes that the best way to phase substances in the REACH system is to use tonnage, not risk, as the main criterion. However, the Bellona Foundation acknowledges the fact that some substances that can be proven harmless to human health and the environment. Therefore Bellona suggests the obligatory performance of a risk assessment of all substances that are to be registered, by certain pre-decided criteria. This should be used to decide whether the substances can be considered harmless and placed in Annex II and III which exempts certain substances and materials from registration.

The phase-out of substances must not be dependant on the Agencys capacity but on specific targets and goals from the European Commission. In cases where less harmful substances are available on commercial basis as replacements for high-risk chemicals, authorisation for continued use must not be given. All chemical substances must continue to be classified and labelled and the responsibility for this must lie on the industry. The Bellona Foundation welcomes the initiative of harmonised classification and labelling in all the EU member states.

Background
The current EU legislation for chemical substances is a patchwork of many different directives and regulations, which has developed historically over the last 20 years. Essentially, chemicals introduced into the market after 1981 are called new substances and must be tested for health- and environmental effects before they can be used by the industry. Public authorities are responsible for performing risk assessments of substances rather than the enterprises that manufacture, import, or use the substances. The current legislation does not impose similar obligations on downstream users, such as industrial users. Chemicals that were placed on the marked before 1981 are called existing substances. There is no obligation for anyone, be it the public authorities, importers, manufactures, or down-stream users, to provide information on the health and environmental effects of existing substances. However many existing chemical substances such as brominated flame-retardants, do have a great impact on human health and the environment. DG Enterprise states that new substances only make up 1 percent of the total volume of substances on the marked. It is frightening that nothing is known about health- and environmental effects in 99 percent of the substances.

Therefor, the existing legislation does not require sufficient information on the health and environmental effects of the majority of existing chemicals. In addition, it does not require manufactures and industrial users of new chemicals to take responsibility for testing the effects of their products regarding possible health and environmental effects. The current system hampers research and innovation, because industry are not obligated find alternatives for the chemicals they are using with the objective to replace harmful substances with less harmful alternatives. It also provides little transparency for consumers and few incentives for sharing information.

The proposed REACH-regulation
The European Commissions White Paper on the strategy for a future chemical policy was published in February 2001. It identified seven objectives, all of equal importance, that should be met to observe the principle of sustainable development.

In October 2003, the European Commission proposed a new regulatory framework for chemicals called REACH for the Registration, Evaluation and Authorisation of Chemicals. The goal of REACH is twofold:

1) The two most important aims of this system are to enhance the competitiveness of the EU chemicals industry.

2) To improve the protection of human health and the environment from the risks of chemicals.

The REACH regulation will create a single system for both existing and new substances. It requires manufactures and importers to obtain relevant information on the substances they produce and provide, and to use that data to manage the substances safely. Substances with properties of very high concern can be made subject to authorisation by a European Chemical Agency. The actors that apply for authorisation will have to demonstrate that risks associated with the use of these substances are adequately controlled and that there is no economically viable alternative. REACH will also demand data sharing and better information on hazards, risks and how to manage them. The European Chemical Agency will manage the technical, scientific and administrative aspects of the REACH system. Registration deadlines for phasing substances into the REACH system are illustrated below. The proposed regulation sets registration deadlines based on tonnage produced or imported. In addition, substances that contribute to increased risks of cancer, have mutagenic properties, and those that are toxic to reproduction (CMR) are obligated to register in the REACH system within the first three years of its implementation (figure 1).

Bellonas view on REACH
Sustainable development and the protection of health and the environment should be among the EUs top priorities. The Bellona Foundation believes that REACH is an important instrument for phasing-out and replacing harmful substances. Bellona supports the view that there is a need for a common regulation of both new and existing chemicals.

Unlike the current system where public authorities perform risk assessments on substances, the REACH proposal suggests that the burden of proof should lie on the producers and manufacturers. The Bellona Foundation considers that the REACH regulation should include the six principles listed below.

Possibility for stronger national regulation of chemicals
As with all regulations, REACH is a total harmonisation regulation. This implies that, in order to ensure the free circulation of goods, all EU Member states must put forward the same health and environmental requirements for chemicals. However, the Bellona Foundation believes that national authorities should be entitled to impose stronger regulations on certain chemicals in cases where national, regional or local health or environmental aspects makes this necessary. Examples of this can be in cases where local or regional concentrations of a substance are high and no further use or release of the substance is recommended. The need for stronger national legislation should then be reported to the European Chemicals Agency which would determine the legitimacy of the demand.

Registration deadlines and prioritisation of efforts
The registration deadlines for phase-in substances in REACH are based on tonnage produced or imported each year (figure 1). Also substances that are known to contribute to increased risk for cancer have mutagenic properties and those that are toxic to reproduction (CMR substances) are obligated to register during the first three years. The Bellona Foundation believes that the best way to phase-in substances in the REACH system is to use tonnage, not risk, as the main criterion. There is little knowledge on the environmental or health effects on the majority of chemical substances. Starting with prioritisation of substances of the highest concern could make the registration system less transparent and feasible and might exclude chemicals that are produced in great quantities but which have lesser-known impact on health and environment. In addition, PBT substances should also be registered the first period.

It is essential that the scope of the registration requirement in REACH is clear. In some cases it will be possible to prove a substance used in great volume to be harmless to human health and the environment. The Bellona Foundation believes that all substances within the scope of REACH should need not undergo full registration dossiers. There is a danger that the REACH system might place heavy administrative burdens on the industry, thus reducing its competitive edge with industries located in other parts of the world. This might especially apply for small down stream users. The Bellona Foundation suggests the obligatory performance of a risk assessment by certain pre-deermined criteria. This should be used to decide whether the substances can be considered harmless and placed in Annex II and III of the REACH initiative that exempts certain substances and materials from registration. This approach will also clarify which criteria apply for the chemicals to be listed in the annexes. The risk assessment will also be used to decide whether a substance can be temporarily exempted due to the proof of very low risk or be instructed to go through with the full REACH registration at once (figure 2). The Bellona model still instructs inclusion in REACH depending on volume produced or imported, but opens for placement in Annex II and III or temporarily exemption when there can be proved that the substance has no harmful effects on human health and the environment. 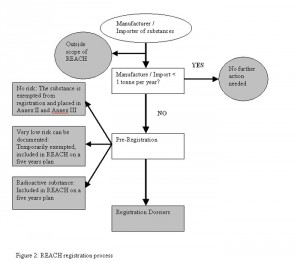 Authorisation as an instrument for eliminating high-risk substances
The Bellona Foundation believes that the European Chemicals Agency should be given the task of setting specific targets and deadlines for replacing harmful chemical substances which impact on human health and the environment. For chemicals of high concern, the onus must be on the industry to identify possible replacements and targets of phase-out in order to eliminate unacceptable risks of releases and exposure to such substances. The phase-out of substances must not be dependant on the Agencys capacity but on specific targets and goals from the European Commission. In cases where less harmful substances are available on a commercial basis as replacements for high-risk chemicals, authorisation must not be given. Specific criteria should be developed in accordance with which characteristics are needed to receive authorisation for continued use of high-risk substances.

Criteria for registration, classification and labelling
The European Chemicals Agency should impose on producers, industrial users and importers that they produce impact assessments and risk assessments regarding chemicals that are to be registered. Such assessments must address bio-accumulation, toxicity, solubility, possible environmental effects, and risk to human health from exposure to the substances. In addition, these assessments should provide information on how to handle the chemical in the production processes, the need for special training programs in handling them, etc. Classification and labelling of a substance with health and environmental hazards reduces its production and use. In addition, it highlights how harmful chemicals are treated in production and in the daily use of products. Therefore, all chemical substances must therefore continue to be classified and labelled and the responsibility for this must lie on the industry. The Bellona Foundation welcomes the initiative of harmonised classification and labelling in all the EU member states, regarding environmental and health hazards, skin sensitises, etc.