Vis menyen
Bellona.org > Latest News > European Union > What to expect from the Maltese EU Council Presidency on the climate and energy front

BRUSSELS – On 1 January 2017 the six-month rotating presidency of the Council of the European Union was taken over by Malta, the EU’s smallest Member State. The Maltese face a challenging agenda in an uncertain and turbulent political environment. Inevitably, much attention will be focused on recent developments including Brexit and the possibility of a formal negotiation process being triggered in the next six months; the migrant and refugee crisis, as well as terrorist attacks in multiple EU countries. Climate and energy policy will also feature high on the Maltese Presidency’s agenda.

Published on January 10, 2017 by Bellona Europa 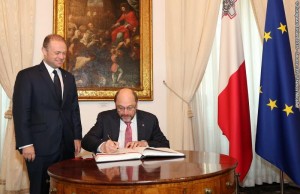 Conference of Presidents meeting with the incoming Maltese Presidency of the Council in Malta. Credit: European Parliament Audiovisual Services

In practical terms, Malta’s recent succession of the EU Presidency will entail assuming responsibility for the running of the day-to-day affairs of the Council which represents the Union’s 28 Member States. This would in turn entail acting as a constructive broker and taking lead in the shaping of European legislation from working-party to ministerial level.

Demanding agenda on the climate and energy front

The Presidency has identified its priority areas to be: migration, security, single market, social inclusion, neighborhood policy and maritime affairs. Nevertheless, climate and energy issues will not be neglected either. The Presidency will also face the challenge of kick starting negotiations on over 17 legislative and policy proposals which were presented last month in the Commission’s 2016 Clean Energy Package.

The Clean Energy Package consists of the Commission’s legislative proposals for a revised Renewable Energy Directive (RED), Energy Efficiency Directive, Energy Performance in Buildings Directive and Electricity Market Regulation among others. These are the last remaining initiatives for the full roll-out of the Energy Union Strategy, and as such the Presidency will play a key role in reconciling diverging positions from many stakeholders. In fact, the Maltese will have to secure progress towards a common Council position before entering negotiations (the so-called ‘co-decision procedure’) with the European Parliament.

Some of the controversial issues that the Presidency will have to secure a common approach to include the level of EU-wide targets for renewable energy or energy efficiency, the future of the European electricity market, and the future of biofuels and other alternative fuels as part of the decarbonisation of transport.

The Presidency will play a key role in driving forward the EU’s implementation of the Paris Agreement while also demonstrating leadership in this regard. To this end, the Presidency will need to advance complex discussions around the review of the European Emissions Trading System (EU ETS), the Effort Sharing Regulation (dealing with emissions in sectors outside of the ETS, including transport and buildings), and Land Use Land Use Change and Forestry. Considering the Slovaks were unable to achieve a general approach on the reform of the EU ETS by the end of their Presidency, Malta will need to accelerate progress on this dossier before it can get underway with inter-institutional negotiations.

Last but not least, in the automotive sector the reform of the EU type-approval regime will be a priority following the launch of infringement procedures by the Commission against seven EU Member States. Here too, reaching a consensus between the Parliament and Council is expected to be a challenge in view of the contentious issue relating to the balance of national and EU-level responsibility.

The Council is also expected to move forward with the third and fourth packages of the Real Driving Emissions Regulation (RDE) intended to improve the accuracy of measuring pollutant emissions from cars and light vehicles. The adoption of the third package is forecasted for early 2017, while a proposal on the fourth package should be presented in March 2017. The Parliamentary Inquiry Committee on emission measurements (EMIS), which was set up in response to the Dieselgate scandal, will present its final report to Plenary in March.

Importantly, this year offers hope of accelerating the rollout of an interoperable EU-wide recharging infrastructure, which remains an important precondition for the electro-mobility market to take off. EU Member States are currently in the process of submitting their national plans for the implementation of the Alternative Fuels Infrastructure (AFI) Directive, which in turn aims to address consumer anxieties with regards to EV range and charging compatibility. Bellona has lead work on this topic within the Platform for Electro-Mobility, which recently published a paper with comprehensive recommendations for the directive’s implementation.

Moreover, the currently ongoing revision of the Energy Performance in Buildings Directive offers an important opportunity (through Article 8 of the Commission’s new proposal) to advance electric recharging infrastructure in buildings. Read more on Bellona’s position on the Commission’s proposal and what it means for electro-mobility here.

Being a small island state with significant congestion and air pollution problems, the Maltese government recently announced the extension of its grant scheme which offers incentives for the purchase of battery electric vehicles and battery electric quadricycles. Its acquisition of the EU Council Presidency offers Malta the opportunity to push electro-mobility forward by influencing and shaping the EU’s agenda in line with its own priorities and goals.