MURMANSK – Murmansk Region, on the Kola Peninsula in Russia’s Far North, will create a protected natural site in the Khibiny Mountains – a place that, back in the 1970s and 1980s, underwent a series of “peaceful” nuclear explosions carried out for purposes of mineral production.

Published on January 23, 2011 by Alexey Pavlov, translated by Maria Kaminskaya 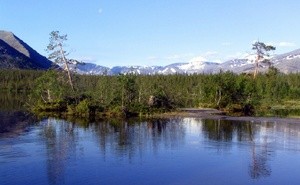 The Khibiny are home to largest deposits of rare ores. The main of them is apatite – a mineral used to make fertilisers. In the 1970s and 1980s, the Soviet government decided to detonate nuclear weapons in the mountains in order to boost apatite production. This was considered one of the “peaceful” uses of nuclear energy.

One of the first locations to undergo these “peaceful” nuclear explosions was a place some 30 kilometres away from the city of Kirovsk, which is situated at the foot of the Khibiny range. Nuclear charges were deposited in 1,500-metre-deep wells drilled in the core of one of the mountains, called Kuelporr.

The first nuclear explosion was conducted in September 1972, followed by another in 1984. The operations were called Dnieper-1 and Dnieper-2, respectively, and were carried out in utmost secrecy. The explosions were powerful enough to pulverise the ore into fine granules and dust – thus sparing the country additional expenditures required for ore grinding.

The explosions, however, proved to be of little use: The extracted ore still remains at the site because the area still has no roads to transport it to a processing plant. The government’s plan simply had not provided for road construction before the decision to conduct the nuclear blasts was made.

Next in line was the deposit of Partomchorr. However, on September 10, 1996, the United Nations General Assembly adopted a Comprehensive Nuclear-Test-Ban Treaty (CTBT), which banned all nuclear explosions in all environments, for military or civilian purposes.  The government of what had by then become the Russian Federation abandoned the plans – thus saving from destruction one of the most picturesque locations in the Khibiny area.

Kirovsk residents had their share of worry and health problems as a result of the “peaceful” explosions. Locals recall how the explosive force took out window panes and caused furniture in their homes to fall down. Then came a ban on picking mushrooms in nearby forests or drinking water without boiling it first.

Environmentalists are currently engaged in continuous monitoring of radioactivity levels in the area, taking samples of water and soil. So far, radioactivity values remain within the norm.

The mines inside the mountain of Kuelporr were soon after the explosion plugged shut with enormous concrete slabs, which have kept the radiation from escaping outside. Yet, radioactive elements are prone to leaking elsewhere with ground water, which creates the risk of radioactivity levels increasing above normal in areas significantly removed from the former blast sites. In fact, rumours of radioactive contamination in these parts still circulate around Kirovsk and the environs.

The news that a national park would be created in the place ravaged by nuclear explosions became a sensation of sorts – this is the first time an idea like this will be attempted in Russia. The project has been included in the Russian Federation’s Land Use Planning Programme in the Field of Development and Siting of Specially Protected Natural Sites of Federal Significance.

Local environmentalists were relieved to hear of the news. It has long been apparent that the Khibiny are an area in urgent need of protection. After many years of heavy tourist traffic and mining works they have become a depressing sight: Hills of rubbish, heaps of refuse ore, gigantic craters left by quarry digging, and many other signs of past and ongoing human activity are present everywhere. Meanwhile, both the Khibiny and the nearby Lovozerо tundras are well-known for their unique landscapes and wildlife.

“This territory is very rich in many rare animal and plant species – species that are on the endangered-species list both in Murmansk Region and in Russia,” said Elvira Makarova, head of the environmental protection department of the Regional Committee for Ecology and Use of Natural Resources. “For instance, it is home to nesting sites of rare species of birds of prey, sites that can still be restored. There are also lots of natural landmarks there, dozens of tourist trails are there.”

The many years of efforts ecologists have applied to saving this unique northern territory have not been in vain. Still, the very process of bringing a national park project to fruition takes at least two years. The current Land Use Planning Programme is at present being considered by the Russian Ministry of Economic Development and the Ministry of Regional Development. Only after the ministries have formed their opinion will the project be up for the government’s decision. When the government gives its go-ahead, the Ministry of Natural Resources will start creating the national park. This will likely happen in a year’s time, at best.

Environmentalists suggest regional authorities arelady now take the territory under their protection, without waiting until the government issues a federal decree. To do that, the regional Directorate of Specially Protected Natural Sites will have to expand its staff of inspectors and beef up its technical resources.

So far, the environmentalists’ proposal has had little traction with local authorities: Murmansk Vice Governor Oleg Tyagunov has said the regional budget is too tight to afford such expenditures. Meanwhile, the Khibiny area is forced to grapple with an increasing anthropogenic burden as it falls prey to rapacious industrial development projects.

“What we are concerned about most is the plan to develop the Partomchorr deposit. Even though the mine expected to be developed there is not too large, the communications routes will cross the Khibiny’s most valuable locations,” Mikhail Ryzhov, an expert with the Kola Ecological Centre, said. “This may automatically mean a death sentence not only for the plan to create a national park there, but also the idea to make it a special tourist zone, Russian Lapland.”

The tourists that are hoped to start visiting these parts will be nature lovers, those who are interested in wildlife – but no wildlife will be left there anymore if such projects are given a green light, Ryzhov said.