BRUSELS—The European Commission proposes an ambitious but realistic target on reducing the European Unions (EU) energy consumption the by 20 percent compared to projections for 2020, equalling the combined current consumption of Germany and Finland. 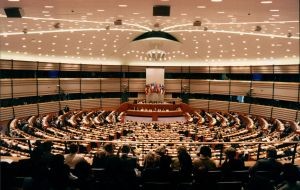 The Commissions previous Green Paper on energy, entitled Towards a European strategy for the security of energy supply (November 2000), noted that the EU has little room to manoeuvre on the energy supply side. The EU imports more than 50 percent of its energy, which means a bill of around Euro 240 billion per year. If the current trend continues, the EU will depend on imports for almost 70 percent of its energy needs in 2030.


Estimations indicate that, if current trends continue, the total energy use within the EU will reach 1900 million tonnes oil equivalents (MTOE) in 2020. The new Green Papers objective is to arrive at the energy consumption level of 1990, owing to energy savings.


The new Green Paper entitled Doing more with less emphasises the importance of energy efficiency to reduce the EUs dependence on energy imports. Energy efficiency is also strongly linked to the Lisbon Strategy which aims to make the EUs economy one of the most competitive in the world. The economy will benefit from energy efficiency thanks to the transfer of resources saved from using energy efficiently, and other economic activities.


The new integrated guidelines for growth and employment, adopted by the Commission on April 12th 2005, point out that recent and forecasted trends for oil prices make action in favour of energy efficiency a priority. The new Green Paper aims to identify options to reduce energy use within the EU, and is the beginning of a process toward agreeing on a concrete Action Plan, involving actions within the International, Community, and at national, regional and local levels.

The Commission states the need to adopt specific measures to rapidly reduce the demand for energy, and describes different measures at the International, European, national and regional levels. The initiatives proposed include a greening car taxation, favourable taxation of energy efficient products, public purchase of green products, and better targeted state aid, as state aid in favour of energy efficiency is approved by the Commission in accordance with the Community guidelines for environmental protection.

–>
Furthermore, the implementation of the Directive on Energy Performance of Buildings (2002/91/EC) is expected to permit an gain estimated gain of up to 40 MTOE between 2006 and 2020. The Commission has also proposed a new directive on energy end-use efficiency, committing Member States to a one percent yearly reduction of energy use between 2007 and 2012.

The Green paper emphasises that a lack of information—for instance in costs and availability of new technology—is an important barrier to increased energy efficiency.


The Green Paper points out that the current pricing system for energy products does not point consumers towards patterns of consumption which offer more economical and rational uses of energy. Including environmental externalities into energy prices is mentioned as a way to provide incentives to use less energy and to produce energy from more environmentally friendly sources.

White certificates are a market-based measure that can be used to ensure that certain goals for reducing energy demand are obtained through the most cost-effective solutions available. In short, such a scheme can be explained as a system where suppliers or distributors are required to undertake energy-efficiency measures for the final user that are consistent with a pre-defined percentage of their annual energy deliverance.


Modelling work performed under the EU 6th framework programme concluded that the introduction of white certificates could lead to energy savings of up to 15 percent at zero cost. White certificates, which can be exchanged or traded on the market, have been partially implemented in Italy and the UK, are undergoing preparation in France and are being considered in the Netherlands. The system has many similarities with other schemes such as green certificates, which promote new renewable energy production, and encompass the scheme for CO2 emissions trading.


One of the challenges of implementing a system of white certificates is finding a way of co-ordinate it with other market-based schemes for new renewable energy production (green certificates) or reducing CO2 emissions through emissions trading.


Discussions have taken place about whether the schemes should be completely co-ordinated and trading should be allowed over the boundaries of the different schemes or not. For instance should energy savings be used to reach obligations for new renewable energy production?


Bellona believes that different scenarios in this vein should be kept separate so that all commitments to energy efficiency, new renewable energy and new technologies for CO2 emissions reductions are supported.


The European Commission is currently preparing for the possible creation of an EU-wide system for white certificates to allow trade in energy efficiency between Member States. A measurement system to this end is expected to be developed under the current Commission proposal for a Directive on Energy end-use and energy services.


The Bellona Foundation supports this initiative, and believes that market-based measures are a more efficient way than direct subsidies or government economic support for reaching both the goals of new renewable energy production and energy efficiency.

Bellona believes that the Green Paper, Doing more with less, is a call to action for European and national public authorities. It is a paradox that, while Member States have recognised that more has to be done to ensure greater energy efficiency, they hesitate to commit to a mandatory annual energy consumption reduction of one percent in the proposed Directive on energy end-use efficiency and energy services.


Despite the effect that energy efficiency will have in strengthening the economy and improving competitiveness, only small efforts have been expanded. The Bellona Foundation therefore believes that EU Member States should be obliged to commit to absolute targets for improving energy efficiency to ensure that the ambitious goals of the Commission are reached.


Bellona considers that promoting energy efficiency is the cleanest way of making alternative energy available. Indeed, initiatives encouraging energy efficiency contribute neither to increased global warming potential nor to an increase in soil, water, or air, pollution or to the disturbance of local biotopes.


Additionally, initiatives supporting energy efficiency will often be cheaper to implement than the production of new fossil or renewable energy because they do not demand investment in new infrastructure or in delivery networks. Bellona believes that the new Green Paper on energy efficiency is a good start for reducing the energy demand within the EU and improving the competitiveness of the economy in a green way. But the Green Paper must be followed up by the implementation of new directives and measures promoting energy efficiency.