During the Bellona Hydrogen Workshop in the EU parliament March 20th, Michael Austell of the INCO2 presented experiences from the US that indicates CO2 storage could give Norway more oil and gas.

Published on April 1, 2003 by Sondre Grinna, translated by Hanne Bakke 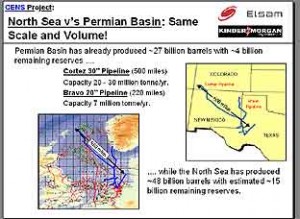 The workshop was arranged by Bellona and Member of Parliament Claude Turmes, and focused on the possibilities of CO2 storage in relation to the production of clean hydrogen. Bellona had invited expert J. Michael Austrell from INCO2 to lecture on the CENS project (CO2 for Enhanced oil recovery in the North Sea).

The CENS project is owned by ELSAM, Denmark’s largest producer of electrical power, and Kinder Morgan, a US energy company with vast experience in CO2 transport. The project is aiming to prepare for a CO2 infrastructure in the North Sea.

Vast experience in the US
In the US the experience with CO2 injection is extensive, and CO2 has been used in the oil industry for almost 40 years for Enhanced Oil Recovery (EOR). The primary goal has never been to store CO2, but to take advantage of its ability to increase oil production.

For this reason CO2 occurring in natural underground deposits has been primarily used. This is transported to oilfields where it is injected as a supercritical liquid in order to pressure up more oil. The largest CO2 pipeline network in the US is almost 1500 km long. The pipeline in the US is in a comparable scale to what is needed in the North Sea.

Can save fragile areas
Austell said that when pumping oil only 20-25% of the content in the field is produced in the first round. Then water is injected into the field to get up an additional 15-20% under secondary production. If CO2 is used as a third step one can pump up 6-15% of what originally was in the field. Austell says this means a 10-30% increase in the overall oil production fro a field. This could lead to more vulnerable areas being spared from oil drilling.

Today it is common to use natural gas to maintain pressure in the wells in the North Sea. Nearly half of the natural gas pumped up in the Norwegian sector is pumped back into the wells. A considerable part of this will not be possible to regain, he claims.

CO2 equivalent to 2% of Norway’s GHG emissions already stored
ELSAM is the owner of modern coal driven power plants in Denmark. These have an expected lifespan of 25-35 more years, and will continue to pump CO2 into the atmosphere as long as coal is being burnt. If these emissions are handled one can trap and deposit 90% of the amount of CO2 created. By handling the CO2 from two of Denmark’s power plants, one captures half of the emissions required for Denmark to reduce, in order to fulfil their Kyoto-protocol.

It is not only CO2 from combustion that is important to store. Just as important is the CO2 that naturally is coming up from the oil- and gas wells. On the Sleipner-field in the North Sea, Statoil deposits annually ca. one million ton CO2. Simple maths shows that this is equivalent to 2% of Norway’s GHG emissions, and between a fourth and a third of what Norway must reduce before 2010.

Easier transition to renewable sources
Even if CO2 leads to increased oil production, it does not add up if a value on avoiding CO2 2 emissions is not set. Austell mentions the Norwegian CO2 2 tax as one instrument to value the sequestered CO22. The CENS project is of the opinion that the value of avoiding CO2 2 emissions needs to be 20 – 25$ pr. ton, before CO2 2 for EOR is financially sound.

Austell closed his lecture by saying CO2 2 capture and storage is a tool to use while we wait for renewable systems to be built, and as long as we burn oil and coal. Austell estimates this to go on for another 25-35 years from existing facilities, but he says others are of the opinion that we will use coal long after this. The hydrogen society will evolve through first decarbonising fossil fuels that will require the storage of CO2 2 in geologic formations like oil and gas fields, he says. But once the hydrogen and CO2 2 infrastructures are built, the transition to renewable sources directly producing hydrogen will be much easier.