Success for hydrogen in European Parliament

Bellonas workshop in the European Parliament has just ended as a success. The number of people attending was far higher than expected, says Frederic Hauge.

Together with Member of Parliament Claude Turmes, Bellona arranged a workshop on hydrogen in the European Parliament. The purpose was to introduce the Members of Parlament and their assistants to what Bellona views as a realistic path towards the hydrogen society. Other environmental organisations were also invited to present their thoughts and questions regarding hydrogen and underground carbon sequestration. 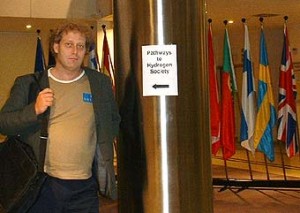 Unusually high attendance from the Commission
There also were a lot of people attending from the Commission. Representatives from four directorates were present; industry, environment, research and transportation and energy. The Directorate of Research (DG Research) attended with the director responsible for the research program on hydrogen, indicating that the workshop had high priority.

Its unusual to see so many Members of Parliament participating at this kind of conference, says Paal Frisvold of Bellona. The Commission attendance was unusually high. We have created a dialogue between stakeholders who normally dont speak together. This is the first time MEPs, representatives of the Commission and NGOs come together to discuss the angle of approach to the hydrogen issues.

Continued dialogue
Turmes from the Green party opened the meeting, before Bellona sketched out a path to the hydrogen society through carbon sequestration. The discussion that followed was both vivacious and constructive.

We have received many points of view to work on, said Frederic Hauge of Bellona in his final contribution. He encouraged all the participants to pass on questions and information. Bellona wishes to keep up the established dialogue.

A very constructive day. Many will probably keep this workshop in mind for some time to come, stated Hauge right after the meeting had ended. Some of the participants agreed to continue the discussion over dinner later tonight.